A goal in each period and a shut-out from Stanislav Galimov saw CSKA to a comfortable win at home to Dinamo Riga.

The home team lined up without leading scorers Alexander Radulov and Stephane da Costa but still had too much firepower for the Latvians. Goals from Sergei Andronov, Maxim Mamin and Simon Hjalmarsson made the difference.

However there are some fitness worries for the home team. Radulov’s injury is set to rule him out of Thursday’s table-topping clash with SKA and the KHL’s top point-scorer might also be forced to sit out Sunday’s All-Star Game in Sochi. 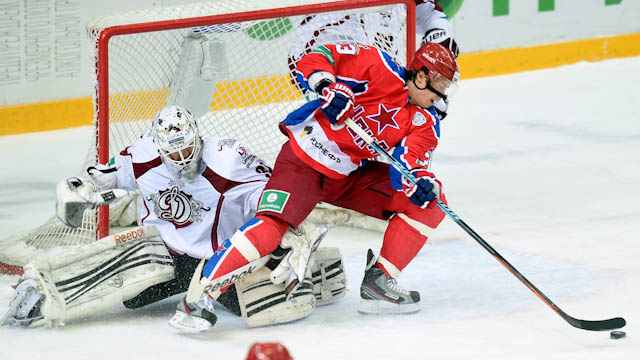 Koskinen’s first SKA shut-out
Mikka Koskinen had his first shut-out since moving to SKA – but found himself on the bench as his team won a shoot-out at Torpedo.

Koskinen and his opposite number Mikhail Biryukov both made 27 saves in 65 scoreless minutes in Nizhny Novgorod but the Finn was replaced with young Igor Shestyorkin as the result came down to penalty shots.

Shestyorkin was beaten by Wojtek Wolski, but saved the attempts from Jarkko Immonen and Sakari Salminen; SKA found the net through Ilya Kovalchuk and Artemy Panarin.

The win strengthens SKA’s grip on second place in the West while Torpedo desperately need to start collecting points in the play-off race.

Sibir inches ahead again
The race for the summit of the Chernyshev Division remains one of the big unresolved questions in the Eastern Conference and Sibir assumed top spot once again thanks to a 5-2 win at Metallurg Novokuznetsk.

The Siberians, not expected to be among the front runners this season after a summer of changes, joined Avangard on 92 points having played a game less and garnered a superior goal difference, but had to work hard to subdue a hard-working Kuznya team.

Two goals early in the second period put the hosts in front for a while, with Artyom Garifulin and Vadim Mitryakov cancelling out Igor Ozhiganov’s first-period opener.

But Sibir turned it around fast: Sergei Shumakov tied it up with his third in three games and two minutes later Ozhiganov’s second made it 3-2. A Jonas Enlund penalty shot and an Alexei Kopeikin power play goal completed the scoring in the third.

Metallurg Magnitogorsk left it late to sneak a shoot-out win at Avtomobilist. After two scoreless periods the home team went ahead through Eduard Lewandowski’s 46th-minute goal. Yaroslav Khabarov tied it up in the 56th minute and Tim Stapleton settled it in the shoot-out.

There was an even more dramatic conclusion to Lokomotiv’s game at home to Traktor – Sergei Plotnikov got the only goal with just 17 seconds to play. It was Loko’s 35th shot at Michael Garnett’s net and it proved to be decisive. Vitaly Kolesnik made 27 saves at the other end.

Dynamo Moscow suffered a 2-1 defeat at home to Lada with visiting goalie Evgeny Ivannikov impressing with 35 saves. Jiri Hunkes put the visitor on the right road with a power play goal midway through the second period and Georgy Belousov doubled the advantage early in the third. Kaspars Daugavins’ close-range finish pulled one back but Lada held on to keep its play-off hopes alive. 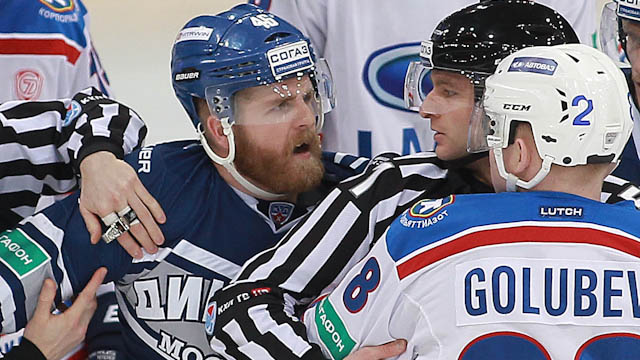 Jokerit’s celebrations of clinching a play-off spot in its debut season came to an abrupt halt at Severstal. The Steelmen won it 2-1 thanks to goals from Evgeny Mons and Dmitry Kagarlitsky after Topi Jaakola gave Jokerit the lead early in the second.

It took 20 penalty shots to separate HC Sochi and Neftekhimik after the teams tied 2-2. Andrei Mikhnovich eventually gave Neftekhimik the points after the third period had seen Alexander Yevseyenkov cancel out Corey Emmerton’s goal to force the extras.

Dinamo Minsk maintained its grip on fifth place in the West with an entertaining 6-4 win at Slovan. Matt Ellison led the way with two goals; Lukas Krajicek got the game winner.

Vyacheslav Leshchenko’s third-period goal gave Atlant a 3-2 win at Medvescak. Earlier the visitor opened up a 2-0 lead through Anton Babchuk and Matt Gilroy, only to be pegged back by quick goals from Mark Flood and James Wright.

Nikita Gusev’s second goal of the game was enough for Ugra to edge Vityaz in overtime after a 3-3 tie. Ben Maxwell also scored two for Ugra, Mario Kempe hit a double for the host. 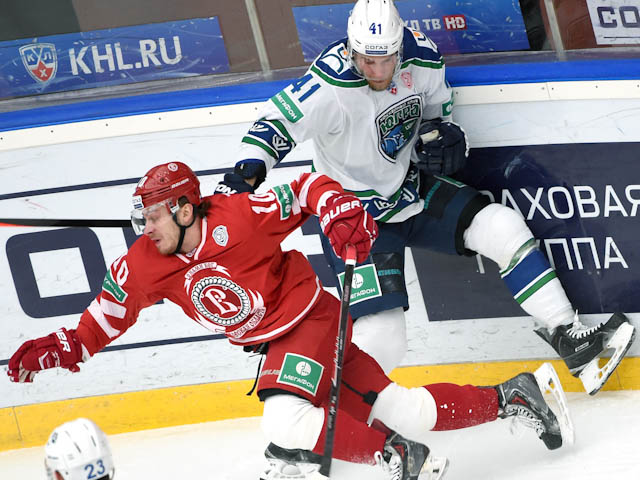