Barys snapped a three-game losing streak to overcome Salavat Yulaev in a clash between two of the East’s least predictable teams.

Perhaps unsurprisingly it was an even game that ebbed and flowed: Barys gave up a 2-0 lead in the closing minutes before Nik Antropov secured the win with 100 seconds left to play. If there was an element of fortune about the bounce of the puck as he burst over the blue line there was nothing doubtful about his backhand finish on Vladimir Sokhatsky to win the game.

But even if Barys has produced some inconsistent form this season, forward Roman Starchenko has been on a good run lately, scoring in five games in a row before firing a blank against Avangard on Saturday. Starchenko was back on the goal trail here, opening the scoring in the 34th minute after Antti Pihlstrom’s careless pass presented him with the puck and a chance to rush the net.

Kevin Dallman doubled the lead on the power play with a meaty shot from the blue line but Salavat Yulaev came back strongly. Evgeny Skachkov pulled one back in the 52nd minute before another in-form forward, Anton Slepyshev, scored his fifth goal in four games to tie it up in the 57th minute. 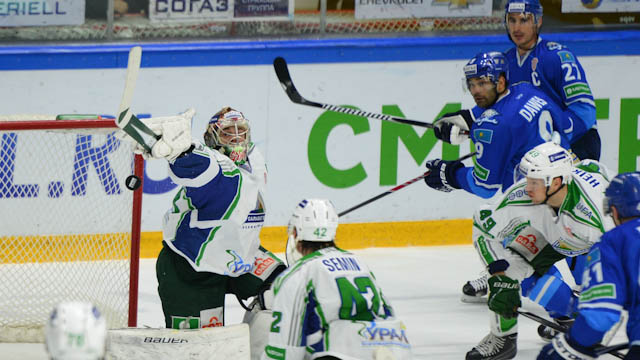 Admiral quashes Amur revival
The latest Far East derby saw Amur battle back from 0-2 down before succumbing to Admiral in overtime in Khabarovsk.

The visitor shaded the first period, missing a penalty shot in the fourth minute when Alexander Gorshkov fired into Sergei Borisov’s pads before Alexei Ugarov opened the scoring 18 seconds before the intermission. Enver Lisin doubled that lead with a power play goal early in the second period and it seemed as if Admiral was set fair for a comfortable win.

But after struggling for two periods Amur came back strongly in the third. Dmitry Tarasov reduced the deficit and Evgeny Orlov tied it up in the last minute to force overtime.

However Admiral recovered its composure to win the game when a flowing move found Fyodor Belyakov well placed at the far post to rifle home the deciding goal.