Defending champion Metallurg Magnitogorsk moved to within three points of the top of the Eastern Conference thanks to a 3-1 home win over section leader Ak Bars.

The home team recovered from going behind in the second period to Dmitry Obukhov by hitting three unanswered goals in the final session.

Sergei Mozyakin tied it up on 42 minutes with a classic power play goal from Magnitka’s first line before Evgeny Timkin made it 2-1 when he turned home a Mikhail Yunkov shot from the center. Denis Platonov completed the scoring when he won the puck in his own zone and got away from two defenseman to score on Anders Nilsson. 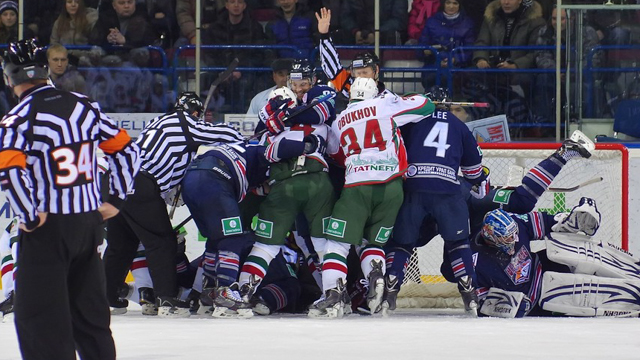 Jokerit into the play-offs
League leader CSKA suffered a 2-1 loss at Jokerit in the biggest game of the day.

Although the first period was goalless many rated it the most absorbing hockey seen in Helsinki this season as both teams playing skilful, high-tempo hockey.

The pace dropped slightly in the second period but Steve Moses finally broke the deadlock in the 36th minute. The goal came on after Juhamatti Aaltonen stopped Mikhail Naumenkov from clearing his zone and the puck broke for Moses to score on Kevin Lalande in a one-on-one.

Aaltonen made it 2-0 midway through the third before Igor Makarov pulled one back for CSKA. The closing stages couldn’t produce another goal, but there was a fight between Makarov and Semir Ben-Amor to enliven the final minutes of an exciting contest.

The win ensures that Jokerit will contest this season’s play-offs, extending its first KHL campaign into March and joining CSKA.

SKA secures top eight finish
SKA also confirmed its place in this season’s play-offs – but it took a late flourish to see off Severstal.

The game was tied at 2-2 in the 58th minute before Roman Cervenka snatched the game winner with his second of the night. Viktor Tikhonov found the empty net to complete the win.

Earlier Cervenka had added to Andrei Kuteikin’s first-period marker to give SKA a 2-0 lead early in the second session. But Severstal struck back through Andreas Thuresson and Evgeny Mons to tie it up.

Around the league
Lauris Darzins gave Dinamo Riga a shoot-out win at Torpedo in a battle between two teams desperately trying to get into the top eight. The 3-3 tie in regulation suited neither, though, as it enabled Vityaz to hold onto 8th spot.

Neftekhimik was the day’s biggest winner, downing Ugra 5-1 in Khanty-Mansiysk. Dan Sexton and Evgeny Grigorenko made it 2-0 in the first period and there was no way back for the host.

Traktor made it six wins in a row with a comfortable 4-1 win at home to Avtomobilist. Two goals from Andrei Popov led the way from the men from Chelyabinsk.