Two second-period goals took Dynamo Moscow to a 2-0 victory at Slovan, while Alexander Lazushin made 32 saves for his second shut-out of the season.

There was little to choose between the teams in the opening session but after the interval Dynamo demonstrated its counter-attacking game. Despite being outshot 14-4, the Blue-and-Whites scored twice through Denis Kokarev and Mat Robinson.

The third period was disrupted by a string of penalty calls on both sides and the fragmented game helped Dynamo hold on for the win. 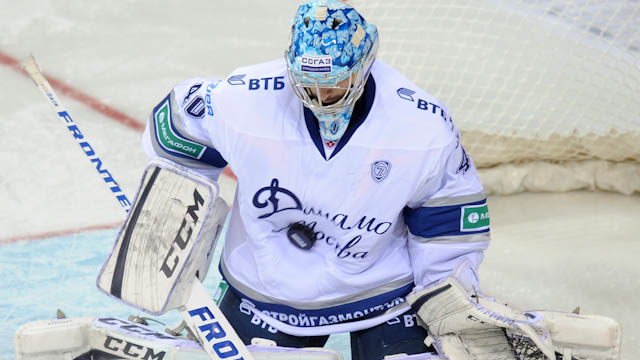 Sibir slips back …
Sibir’s stay at the top of the Chernyshev Division last just one game before a 4-1 home defeat against Salavat Yulaev sent the Novosibirsk team tumbling.

Initially things looked bright for the host when Sergei Shumakov opened the scoring on the power play in the seventh minute.

But Salavat’s unpredictable form took a rapid upswing thereafter. Antti Pihlstrom tied it up midway through the first period and his fellow Finn Teemu Hartikainen made it 2-1. Two goals from Anton Slepyshev completed the scoring.

Defeat pushes Sibir down to fourth, one place and 17 points ahead of Salavat Yulaev.

… and Avangard regains the lead
Avangard was the big beneficiary of Sibir’s defeat, returning to second place in the Eastern Conference with a 4-1 win at home to Barys.

It took some time for the host to get going, though. Barys struck first thanks to Talgat Zhailauov’s 13th-minute marker and after Erik Gustafsson tied it up early in the second the teams were deadlocked until deep into the final session.

Young forward Kirill Rasskazov got his first goal of the season, and only his second in the KHL, to separate the teams in the 50th minute but the game remained in the balance until Barys withdrew goalie Dmitry Malgin only to concede two empty net goals. Alexander Perezhogin and Igor Musatov gave the scoreline a comfortable look.

Vityaz moved into the top eight thanks to a 5-2 win at Dinamo Minsk. Pre-game form favored the host, but after Vyacheslav Solodukhin and Alexei Makeyev put Vityaz two up in the first period there was no way back. Jonathan Cheechoo scored twice for Dinamo but Maxim Mamin claimed the winner midway through the third. 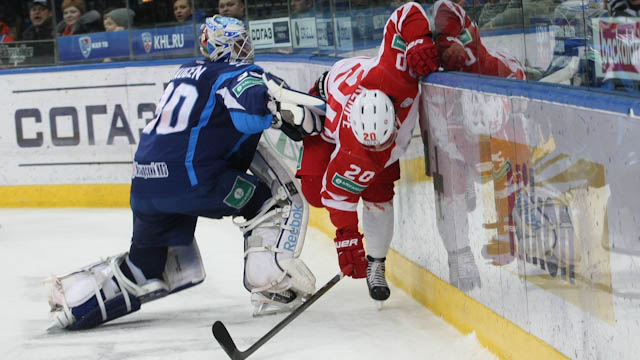 Mark Popovic grabbed a dramatic winner for Medvescak just two seconds before the end of overtime against HC Sochi. The teams had tied 2-2 in regulation, with Sochi having a goal ruled out early in the third for kicking the puck. Edwin Hedberg and James Wright were Medvescak’s other scorers; Andre Petersson and Corey Emmerton found the net for Sochi.

A goal and an assist for Yegor Yakovlev helped Lokomotiv to a 4-1 win at Atlant. The visitor opened up a 4-0 lead before Nikita Soshnikov’s late consolation effort. 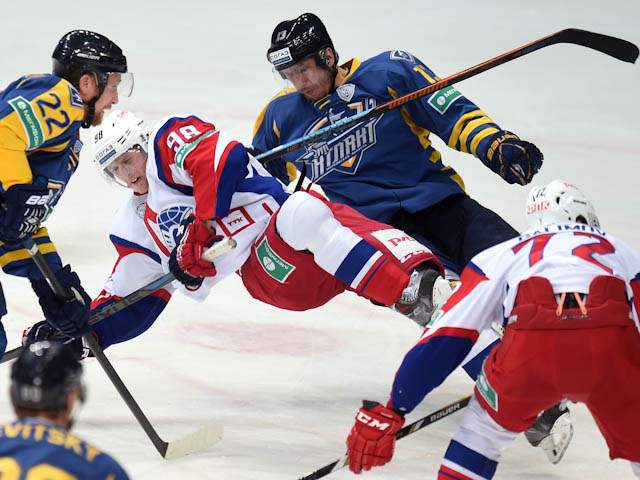