League leader CSKA was the overwhelming favorite at home to an off-color Torpedo team, but found its opponent in obdurate mood.

It took a solitary goal from Stephane da Costa – his 24th of the season – to separate the teams as goalies Kevin Lalande and Mikhail Biryukov impressed between the piping.

Da Costa’s goal was a memorable one, however, coming off a swift break from center ice and finishing off some slick interplay involving Jan Mursak and Simon Hjalmarsson to open the scoring late in the first period.

There were few clear scoring opportunities in the second, but the third period saw Igor Grigorenko go close of a da Costa pass before Jarkko Immonen spurned a great opportunity to tie it up for the visitor late on, firing straight at Lalande when clean through on the net. 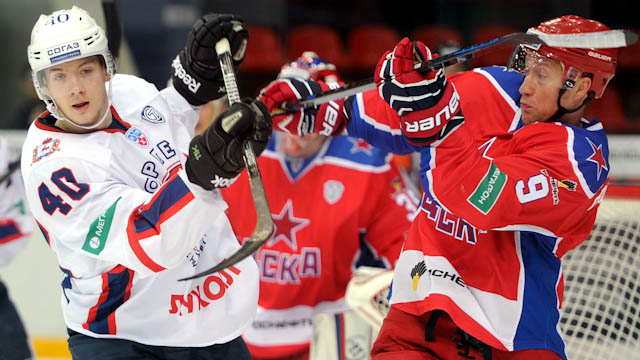 SKA goes to a shoot-out in Riga
Dinamo Riga surprised SKA on its previous visit to Latvia and the men in maroon almost did it again, taking the game to overtime before succumbing to the in-form Artemy Panarin in the shoot-out.

The game was tied at 2-2 after 60 minutes thanks to Mikelis Redlihs 59th-minute leveller for Dinamo. Evgeny Dadonov scored twice for SKA to cancel out Lauris Darzins’ 25th minute opener.

The win makes SKA the second team to reach 100 points this season, while defeat cost Dinamo the chance to draw level on points with eighth-placed Torpedo.

Daugavins goal defeats Medvescak
Kaspars Daugavins scored a power play goal in overtime to snap a 3-3 tie and give Dynamo Moscow the verdict at Medvescak.

The Latvian forward forced the puck beneath Calvin Heeter after the goalie blocked a shot from Maxim Pestushko and despite a desperate attempt to clear it from the goal-line the video official confirmed that the goal should stand.

HC Sochi earned a little breathing space in the race for the play-offs, moving six points clear of the teams just outside the top eight with a 5-3 win at Slovan. Igor Radulov got his first goal for the club as the team cancelled out an early Libor Hudacek marker and raced into a 4-1 lead. Slovan scored two quick goals in the third period but Andre Petersson’s second of the night ensured that Corey Emmerton’s goal would be the game winner.

Atlant eased to a 3-1 win at home to Vityaz to climb from the foot of the Western Conference. Albert Yarullin’s power play goal gave the host an early lead and Maxim Potapov doubled the advantage before Atte Engren saved a penalty shot from Mikhail Yakubov. Sergei Shmelyov added a goal to his two assists before Robert Kousal pulled one back for Vityaz. 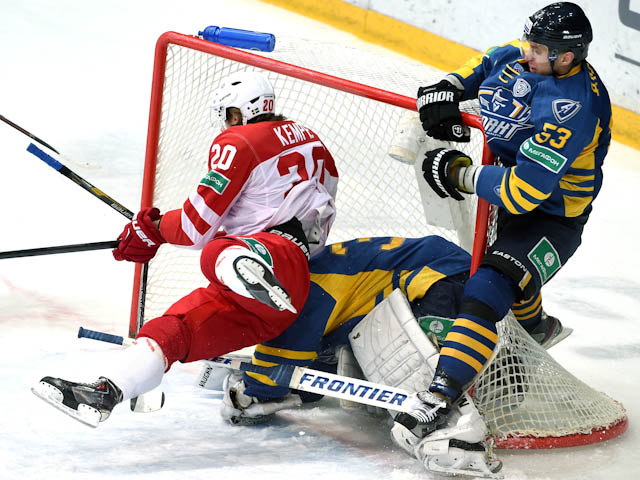