This season’s Army derbies between SKA and CSKA have taken on an extra resonance with both teams riding high at the top of the KHL table, so it was no surprise that tonight’s big game was a 12,000-seat sell-out well in advance.

And most of those fans in St. Petersburg went home happy after seeing SKA take a 3-1 verdict to snap CSKA’s six-game winning streak, thanks largely to a pair of first period goals from Artemy Panarin.

In the third minute he opened the scoring, putting away the rebound after a mighty shot from Andrei Kuteikin cannoned back off the boards. His second came from a penalty shot after he was fouled by Evgeny Korotkov. Amid a wall of noise from the stands Panarin kept his composure and slipped the puck past Stanislav Galimov’s pad with a backhand finish.

CSKA offered little in the first period but got a goal back after the intermission when Alexander Radulov set up Mikhail Naumenkov in the 33rd minute. Hopes of a revival were short-lived though as Panarin got his third point of the game on Kuteikin’s power play goal a couple of minutes later. 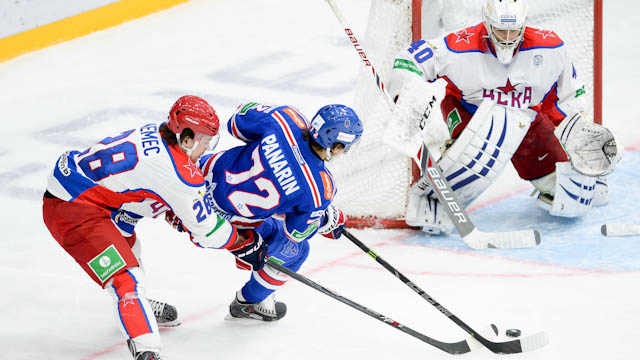 The Muscovites failed with both post-game attempts while Alexander Sharychenkov was beaten twice despite earlier stopping a Charles Linglet penalty shot in regulation. Andrei Stepanov and Ryan Vesce found the net to settle that shoot-out.

Vesce also hit the target to put Dinamo ahead in the 57th minute, but Stepanov found himself in the sin bin seconds later and Dynamo cashed in to tie the game through Maxim Solovyov with two minutes left to play.

Earlier Dmitry Meleshko put the home team in front in the second minute, but after Linglet missed his chance to double the lead Alexander Osipov made it 1-1 in the 53 minute, also on the power play.

Moses back on the goal trail
The KHL’s leading goalscorer Steve Moses snapped a five-game run without a goal to help Jokerit add more misery for struggling Torpedo.

Moses scored two in two minutes early in the second period, adding to Linus Omark’s opener in the first and putting the Finns in command.

It all seemed comfortable for Jokerit when the teams traded goals midway through the third and the visitor decided to swap goalies and give Riku Helenius some game time with a 4-1 lead in the back.

But Torpedo hit back late on as Wojtek Wolski and Evgeny Mozer reduced the deficit to 4-3, leaving Niko Kapanen to claim the game winner. 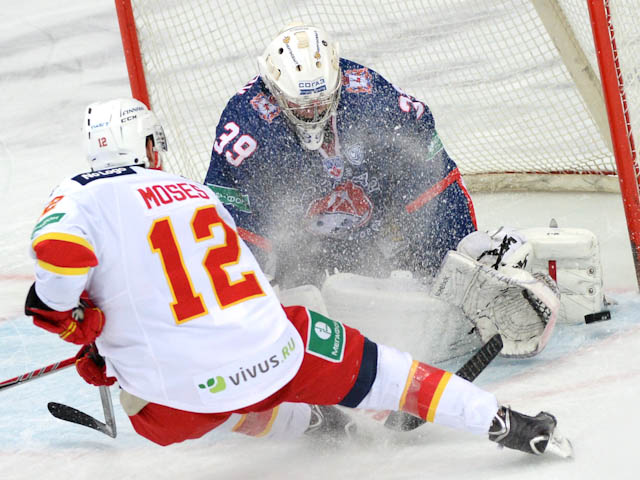 Resurgent Riga eyes play-off spot
Dinamo Riga, for so long languishing off the play-off pace, made it four wins in a row with a 2-0 success over Severstal and now lies just three points adrift of eighth-placed Torpedo.

Mikelis Redlihs opened the scoring just after halfway on the power play and Gunars Skvortsov made the points safe with a short-handed goal in the 53rd minute. Jeff Deslauriers stopped 25 shots for his shut-out.