Salavat Yulaev followed up its win over defending champion Metallurg Magnitogorsk with a victory over Eastern Conference leader Ak Bars, downing its traditional rival 5-3 in Ufa.

The game was very different from the cagey clash between the two teams earlier in the season, which remained scoreless until Salavat took a shoot-out verdict.

This time the teams traded first period goals before the host seized control in the middle session. Denis Tolpeko and Anton Slepyshev scored two goals in four minutes to put Salavat Yulaev 3-1 ahead, and a power play goal for Teemu Hartikainen early in the third seemed to have made the points safe.

Ak Bars had other ideas, though. Igor Mirnov pulled a goal back and when Andrei Kostitsyn’s neat pass fed Mikhail Varnakov it was 4-3 with just over two minutes to play. Varnakov’s goal came after Ak Bars withdrew goalie Anders Nilsson and the visitor tried the same trick again in search of an equalizer, only for Alexander Kutuzov to score on the breakaway, claiming his second of the night and securing the win for Salavat. 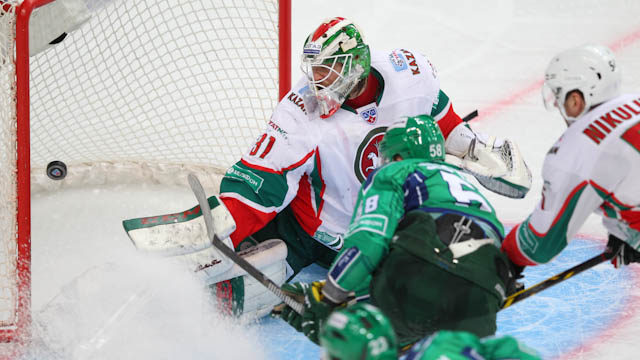 Big battle for Avangard
Avangard maintained its grip on second place in the East but was pushed hard by an Avtomobilist team battling to keep its own play-off prospects alive.

For two periods there was little in the game: the two goalies, Denis Kostin and Jakub Kovar, each made 23 saves as the scoreboard was untroubled. But two goals in two minutes at the start of the third finally gave Avangard the edge. Felix Schutz opened the scoring and Sergei Kalinin extended that advantage moments later.

Alexei Simakov pulled one back for Avtomobilist in the last minute during a 6v4 power play storm, but there wasn’t enough time to force an equalizer and Avangard remains three points ahead of Sibir in the race to top the Chernyshev Division.

Magnitka holds on in Astana
Metallurg Magnitogorsk withstood a late rally to edge Barys 3-2 in Astana.

After falling 5-1 behind before beating the same opponent late last year, Magnitka seized the early initiative this time, opening up a 3-0 lead in the first period thanks to goals from Rinat Ibragimov, Oskar Osala and Denis Platonov.

But there was no repeat of the 13-goal thriller served up in the Urals as Barys swapped goalies and sent Dmitry Malgin onto the ice in place of Pavel Poluektov. The middle session was scoreless, thanks in no small part to committed Magnitka defense that saw the visitor block 10 shots on its goal.

Barys finally found a way through deep in the third: Nigel Dawes and Roman Starchenko scored within 30 seconds of each other to give the home team almost five minutes to save itself, but Vasily Koshechkin kept the Kazakhs at bay to claim the win.

Vityaz ended its long losing run with a late show at home to Slovan. Trailling to Libor Hudacek’s second-period goal the host forced overtime thanks to Maxim Afinogenov’s marker in the 55th minute, then won it on a Mario Kempe goal in the 63rd. 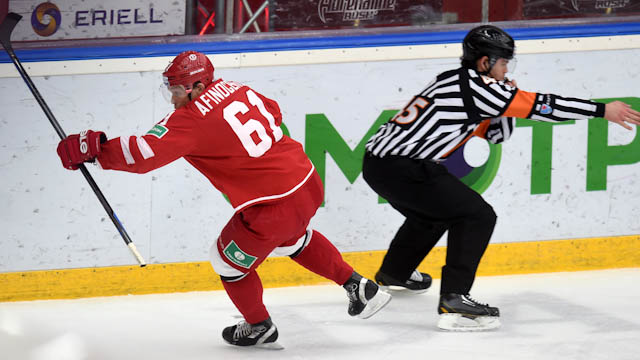 Geoff Platt struck late to end Medvescak’s four-game winning streak after an entertaining game at Lokomotiv. Platt took Jiri Novotny’s pass into the circle before making it 4-3 and halting a Medvescak revival that saw Bill Thomas and Mark Flood wipe out a 3-1 lead in the second period.

Evgeny Lapenkov hit a hat-trick as HC Sochi beat Atlant 6-4. Lapenkov helped his team into a 4-0 lead in the first period, then added a crucial fifth goal in the second as Atlant hit back to make it 5-4 at the second intermission. Andre Petersson got his second of the night into an empty net to make the points safe.

Two goals from Lukas Kaspar helped Ugra to a 4-2 win over Amur, moving the Khanty-Mansiysk team level on points with Admiral and Avtomobilist in the race for eighth place in the East. Kaspar claimed the game winner, snapping a 2-2 tie in the 53th minute before Nikita Gusev wrapped up the points.

Traktor came from behind to win 3-1 at home to Admiral. Niklas Bergfors put the visitor in front in the first period, but a triple strike in the middle session saw Vyacheslav Osnovin, Martin Ruzicka and Andrei Popov fire the home team to victory.

Neftekhimik has had little to celebrate this season but turned on the style in the closing minutes to thump Metallurg Novokuznetsk 6-0. Four of the goals came in the last seven minutes, and two in the last 11 seconds in a game that was scoreless until midway. Evgeny Grigorenko scored twice, Alexander Sudnitsin stopped 28 shots.

An unlucky bounce of the puck cost Lada dear in its 3-1 home defeat against Sibir. As the disc shuttled around the boards it popped up nicely for Sergei Simakov to lash home the 2-1 goal late in the second period. Lada never recovered; Igor Ozhiganov completed the win with an empty-netter. 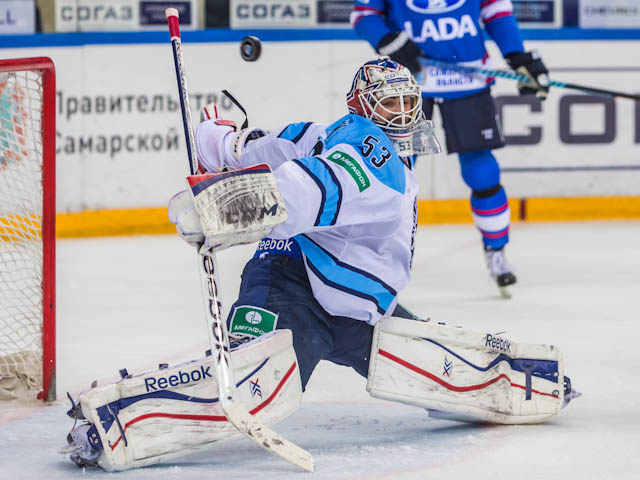