League leader CSKA and high-flying Jokerit served up an entertaining game in Moscow with the host taking the verdict in overtime after a 3-3 tie.

CSKA had already killed a penalty in the extra period before Nikita Zaitsev got the game winner on 63:46, just 25 seconds after Jokerit’s Niklas Hagman was sinbinned for interference. Zaitsev collected a clever reverse pass from Stephane da Costa, took a touch and launched a thundering slapshot past Henrik Karlsson.

Earlier the teams traded goals throughout regulation, starting after just 44 seconds when Jere Sallinen opened the scoring with the first shot on goal for the visitor. That lead lasted less than three minutes before a goaltending howler from Karlsson presented Simon Hjalmarsson with the equalizer.

The middle session followed a similar pattern: Petr Koukal put Jokerit back in front on the power play only for young Ivan Telegin to make it 2-2 shortly afterwards.

In the third Igor Grigorenko sent Andreas Engqvist clean through on goal to put CSKA up for the first time in the game, but a similar move saw Jokerit respond with Ville Lajunen feeding Johan Harju for a breakaway goal to take us into overtime. 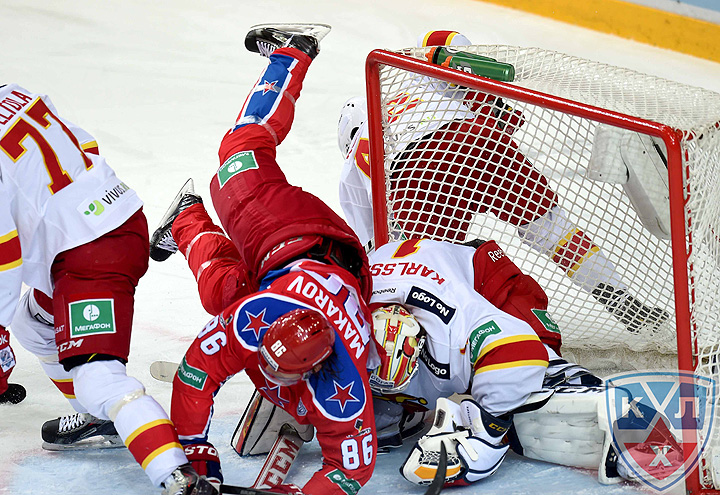 Dadonov downs Severstal
Evgeny Dadonov got the overtime winner as SKA edged Severstal in St. Petersburg. The Russian international notched a power play marker 39 seconds into the extras, punishing Nikolai Stasenko for the holding penalty he picked up deep in regulation.

Stasenko, though, was the player who earned Severstal a point from the evening, tying the game at 3-3 in the 55th minute as SKA gave up 2-0 and 3-1 lead to make harder than anticipated work of the game.

Dadonov had opened the scoring early on, and Artemy Panarin made it 2-0 in the first period, but after Zakhar Arzamastsev and Ilya Kablukov traded second-period goals the home team was hit on a counter attack by Dmitry Kagarlitsky to go into the second intermission at 3-2 and give Stasenko the chance to force overtime.

Dinamo eyes a playoff spot
Dinamo Riga beat Torpedo 2-1 thanks to goals in the first period from Miks Indrasis and Kaspars Sauletis. Torpedo had the better of the game after that, giving Jakub Sedlacek a busy evening in goal, but could only get one goal back through Juuso Hietanen. Third win in a row takes Dinamo four points short of a playoff spot.