CSKA continued its winning streak – but needed overtime to see off a feisty challenge from Vityaz.

The game seemed to be going more or less according to plan when Damir Zhafyarov put the Army Men ahead late in the second period.

But tempers flared in the final stanza, with Evgeny Artyukhin and Roman Kudinov clashing before CSKA’s Nikita Zaitsev picked up a major penalty after a fight with Dmitry Tsyganov. Vityaz took full advantage of its extra men, scoring twice in 30 seconds as Nikita Vyglazov and Vyacheslav Solodukhin extracted maximum punishment.

With less than five minutes to play it looked like Vityaz might end its five-game losing streak and snap a four-game winning run for the league leader, but Igor Grigorenko tied it up at 2-2 almost immediately.

Into overtime and CSKA prevailed thanks to Stephane da Costa’s powerplay goal off Alexander Radulov’s second assist of the night. 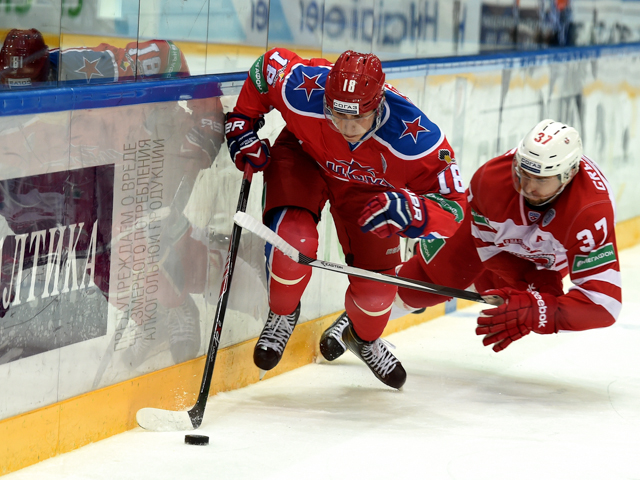 Ak Bars in command in the East
Ak Bars won its third Tatarstan derby of the season and stretched its successful streak to four games with a 3-2 success over Neftekhimik.

Victory puts the Kazan team well clear on top of the Eastern Conference, but despite a swift start the home team didn’t have it all its own way. Kirill Petrov’s third-minute marker was quickly cancelled out by Dan Sexton, and when Sexton helped Matt Anderson make it 2-1 the pressure was on the home team to respond.

It did so in style, out-shooting Neftekhimik 16-4 in the second period and tying it up through Sheldon Brookbank. Justin Azevedo completed the win early in the third.

Lokomotiv steaming onwards
Lokomotiv made it eight wins in a row as it ran over HC Sochi for the third time this season. The Railwaymen’s winning streak has put the Yaroslavl team firmly into the play-off places, while the league newcomer hovers anxiously in eighth place.

This game was settled early on: Loko, which won 9-2 here less than a month ago, began in similar style to romp into a 4-0 lead inside 19 minutes. Indeed there were fears of a repeat rout after Jonas Holos and Andrei Loktionov opened up a 2-0 lead in the first four minutes. Daniil Apalkov and Sergei Konkov added to that before Evgeny Lapenkov got one back on the power play late in the first.

Ryan Whitney made it 2-4 midway through the second, but although Sochi managed to stem the flow of goals completely after the opening stanza it could not find a way to make the game competitive.

Roberts Bukarts scored twice to lift Dinamo Riga to a surprise 3-2 win at home to Baltic rival Jokerit. Oskars Cibulskis and Tommi Huhtala traded goals early on before Bukarts got his first late in the middle session. Niklas Hagman tied it up early in the third, but Bukarts wasn’t to be denied, grabbing the game-winner in the 44th minute.

Jakub Stepanek made 19 saves for a shut-out as Severstal downed Torpedo 4-0 in Nizhny Novgorod. At the other end Mikhail Biryukov faced just 17 shots but allowed three goals as Marek Kvapil, Zakhar Arzamastsev and Evgeny Mons beat him before Vadim Berdnikov added an empty-netter.

Barys struck twice in the final stages to claim a 3-1 win at Salavat Yulaev. Nigel Dawes scored on the power play early in the third period and Kevin Dallman wrapped up the scoring with an empty-netter four seconds from the end. Earlier Roman Starchenko had quickly cancelled out Dmitry Semin’s second-period opener.