Young CSKA forward Nikolai Prokhorkin has developed a taste for local derbies. The goal-getter announced himself on the KHL scene last fall when he celebrated his birthday by scoring a hat-trick to defeat the Blue-and-Whites, and today he prolonged his New Year celebrations by snatching the only goal as the league leader claimed local bragging rights for the holiday season.

Prokhorkin struck late on, in the 58th minute of a hard-fought encounter, instinctly wafting his stick at Denis Denisov's shot from the point and getting enough of a deflection to deceive Alexander Sharychenkov, who watched aghast as the puck bobbled into the net.

Dynamo also had their chances, not least when Martins Karsums failed with a penalty shot after 10 minutes, but Kevin Lalande made 17 saves to keep CSKA level. 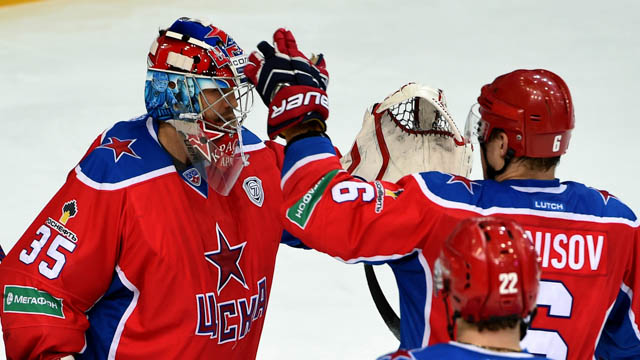 SKA sinks Jokerit in 30 seconds
SKA went to Helsinki and picked up a 3-1 victory that lifts it back into second place in the West at the expense of its Finnish rival.

The game, which attracted a sell-out crowd, did not always match expectations from two of the most exciting KHL teams this season, despite a promising start that saw goals traded in the opening 10 minutes. Alexander Kudeikin put SKA in front in the 5th minute but Linus Omark tucked away the rebound from a Ville Lajunen shot to tie it up on 7:58.

The decisive action came in a disastrous 30 seconds for the home team just after the midway point. First Ossi Vaananen took a roughing penalty, and within four seconds of the power play Patrick Thoresen found the net for SKA. The teams played 28 seconds at equal strength before Evgeny Dadonov stretched the lead to 3-1 and gave the visitor a lead it would not relinquish.

Lada still firing blanks
Lada failed to trouble the scorers for the second game in a row, going down 3-0 at Ak Bars two days after a 2-0 reverse at Metallurg Magnitogorsk. Anders Nilsson made 28 saves to record his third KHL shut-out.

The scoring might suggest that for some time this was a close game: after Oscar Moller put Ak Bars 1-0 up in the 14th minute there was no change on the scoreboard until the third session. But in reality the home team was always fairly comfortable and goals for Mikhail Varnakov and Stepan Zakharchuk completed a routine victory.

Sibir stretches winning run to eight
Sibir made it eight wins in a row by blanking Avangard 4-0 thanks to 32 saves from Alexander Salak.

Avangard had the edge in terms of creating chances, outshooting the home team throughout and looking particularly strong in the middle session, but couldn't find a way past the Czech international. Instead it was Sibir that made the best of its opportunities, snatching the lead late in the first through Sergei Shumakov.

That second stanza saw David Ullstrom and Jonas Enlund offer Avangard a finishing lesson as the home team scored off two of just seven shots on goal. Maxim Ignatovich wrapped it up late on.

Neftekhimik made it three wins in a row with a late show to punish Metallurg Magnitogorsk. The game was locked at 1-1 until Georgijs Pujacs put Neftekhimik ahead in the 59th minute. Mikhail Zhukov's empty-netter secured the points.

Dinamo Minsk twice trailed before beating Atlant 4-2. Jonathan Cheechoo put the Belarusians in front for the first time just after the midway point of the game and Alexei Kalyuzhny wrapped up the win in the third. 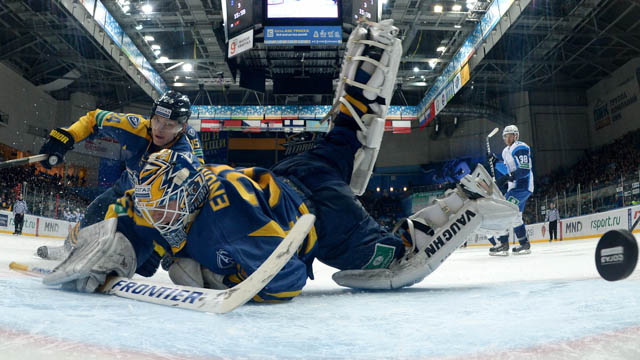 Staffan Kronwall's shoot-out winner gave Lokomotiv the edge against his former club Severstal. The two had tied 1-1 in regulation with Geoff Platt cancelling out Evgeny Mons's opener midway through the first period.

Three goals in the last 15 minutes lifted Traktor to a 5-2 win at home to Ugra. There was everything to play for when Ben Maxwell fired the visitor level in the 42nd minute, but Semyon Kokuyov, Francis Pare and Konstantin Panov proved too much for Ugra to handle.

There was a similar scoreline in Sochi where the home team downed Vityaz 5-2 to snap a six-game losing streak. This time the damage was done early: Corey Emmerton, Igor Ignatushkin and Artyom Kryukov opened up a 3-0 lead inside 22 minutes and despite a Vityaz rally there was no way back for the Moscow Region team.

Metallurg Novokuznetsk clawed back a 1-4 deficit to beat Salavat Yulaev. The visitor seemed to be in complete control early in the second but goals from Mikhail Plotnikov, Ilya Musin, Ryan Stoa and a short-handed game winner from Alexander Romanov transformed the outcome.