Ak Bars ended the year on a winning note with a 3-2 success at home to Ugra – but the Eastern Conference leader had a more difficult evening than expected in Kazan.

It all seemed straightforward early on as Justin Azevedo orchestrated a 2-0 lead in the first 13 minutes. The Canadian helped Oscar Moller open the scoring before adding the second himself as the home team assumed control.

But the middle session saw Ugra roar back into contention, outshooting Ak Bars 18-2 in a dominant display. Emil Garipov was at full stretch to limit the opposition to a solitary power play goal from Alexander Korolyuk in the 26th minute.

Igor Mirnov gave Ak Bars a bit more comfort with a goal right at the start of the third but Ugra continued to have more of the chances and Philip Larsen made it an anxious finish when he pulled it back to 3-2 with just over two minutes to play. 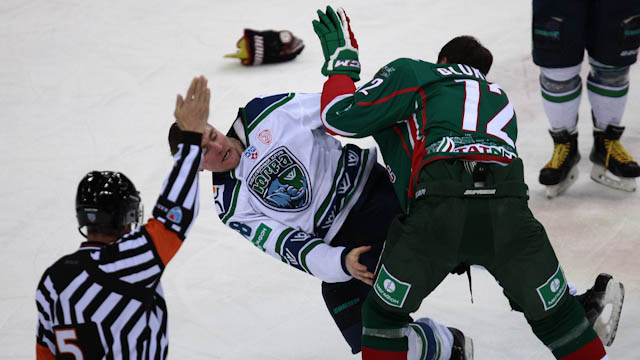 Seven up for Sibir
The New Year holiday will be a festive one in Novosibirsk as Sibir made it seven wins in a row to cement its position in fourth place in the East going into 2015.

Amur was the latest victim, going down to a 6-2 defeat inspired by Dmitry Kugryshev’s hat-trick, with all three of his goals coming on the power play off assists from Jonas Enlund and Jarno Koskiranta.

The game was over as a spectacle in the first period as Sibir raced into a 4-0 lead; two goals from Kugryshev supplemented by further strikes from David Ullstrom and Maxim Ignatovich. The teams traded four goals in the middle session, with Ignatovich getting his second of the game. Enlund finished with four assists.

Lokomotiv made it six wins in a row while HC Sochi suffered a sixth successive loss. Three goals late in the middle session determined the outcome of the game, with Andrei Loktionov, Sergei Plotnikov and Petri Kontiola cancelling out Cory Emmerton’s opener for the visitor. Andre Petersson pulled one back for Sochi but Yegor Averin put it beyond doubt with an empty netter. 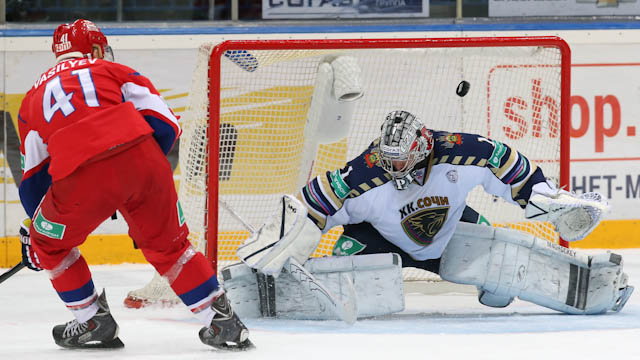 Admiral cruised to a 4-1 win at struggling Metallurg Novokuznetsk, sparked by a brisk start to the game. Vladislav Ushenin and Jan Kolar put the Vladivostok team two up in 10 minutes, and even though Nikita Kamalov pulled one back there was little sign of a recovery. Shaun Heshka and Richard Gynge completed the scoring.

Two goals each from Nigel Dawes and Roman Starchenko led Barys to a 4-2 win over Traktor. The Astana team ended its four-game losing streak, but only after a battle. Traktor led twice through Vyacheslav Osnovin and Andrei Popov but in the third period Barys found two unanswered goals to win it.

Wojtek Wolski got the shoot-out winner for Torpedo after a 2-2 tie at Severstal. Earlier the home team had clawed back a 0-2 deficit thanks to third-period goals from Maxim Trunyov and Pavel Chernov.