Two goals in barely a minute put CSKA on its way to a comeback win at home to Avangard, keeping the league leader out in front and leaving the visitor four points adrift of Ak Bars in the Eastern Conference.

The game started slowly with both sides cautious in offense and congesting center ice for much of the opening minutes. But it was CSKA that let its guard down first, allowing Igor Musatov to rush the net and failing to produce a convincing clearance before Alexander Popov was left all alone to score on Stanislav Galimov.

Two goals in 62 seconds transformed the game, though: first Nikita Zaitsev converted the first power play of the evening, picking his spot low to Eduard Reizvikh’s right off an Alexander Radulov pass. Then new signing Igor Makarov made it two goals in two games for the Army Men, hustling the young netminder to force home the rebound from Alexei Bondarev’s shot.

The second period was again short on chances. Musatov might have hauled Avangard level in the 25th minute but he spurned a clear sight of goal, failing to catch his shot cleanly. For CSKA Damir Zhafyarov showed some lovely stick handling to carve out an opportunity for him but fired over the net.

However, late in the stanza Igor Grigorenko showed the way, emerging from the sin bin to pick up the puck in center ice and bear down on goal. A dangle threw Maxim Goncharov off balance and a low shot deceived Reizvikh to make it 3-1.

That was the end of the scoring as CSKA applied a cautious defense in the final stanza and Avangard was unable to put real pressure on Galimov. Indeed the best chances were at the other end, with Reizvikh making an impressive sprawling save to deny Grigorenko a second and keep his team in contention until the end. 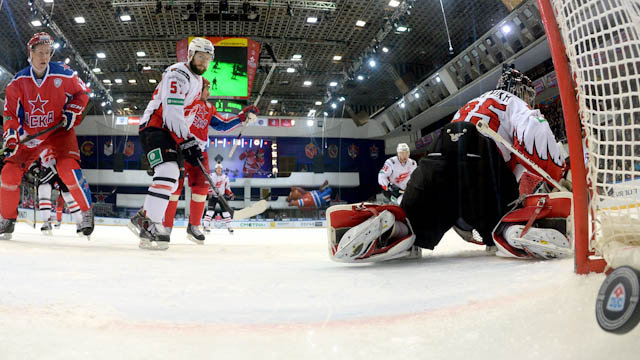 Goal feast at Magnitka
Fans in Magnitogorsk were treated to a blizzard of goals as Metallurg tied 6-6 with Barys in regulation before winning in a shoot-out.

The bare stats might suggest that was a fair outcome: Tim Stapleton’s winner – which came after he scored two in regulation – was apparently just reward for a performance that saw the home team outshoot its rival 42-27. Yet the visitor will be left wondering how it failed to take the win after it never trailed on the night and twice held a four-goal lead thanks to a blistering start to the game.

Barys scored with its first shot of the game, Kevin Dallman beating Vasily Koshechkin from the blue line to convert the first power play of the night after just eight seconds. Koshechkin, who celebrated his 50th KHL shut-out two days ago, was destined for a short evening this time: Dustin Boyd scored on him with his team’s second shot of the night, sending him to the bench after just 10 minutes.

That didn’t do much to stop the Kazakhs’ offense, though: within a minute Magnitka debutant Alexei Murygin was picking the puck from his net as Roman Savchenko made it 3-0, and soon after Brandon Bochenski added a fourth, from a total of just six shots on goal. Sergei Mozyakin pulled one back before the interval but Dawes made it 5-1 early in the second and the game seemed as good as over.

However, Magnitka produced a stirring fightback: Two goals for new signing Tim Stapleton, a second for Mozyakin and a marker for Jan Kovar ensured that by the second intermission the game was tied at 6-6. In the midst of all this Koshechkin returned to his net, giving up one more goal to Bochenski.

After the feast came the famine: the final session was goalless, taking the game into overtime before Stapleton sealed the win in the shoot-out.

SKA wasted little time in seizing control of its game at Slovan, scoring twice in the first nine minutes and moving to a 3-0 lead by the first intermission. Evgeny Ketov, Alexander Barabanov and Patrick Thoresen did the early damage to set the Western Conference high flyer on the way to a 6-1 win. Anton Burdasov had two goals in the second period to lead the SKA scoring on the night.

Wojtek Wolski gave Torpedo a shoot-out win over Dynamo Moscow following a 1-1 tie in Nizhny Novgorod. Earlier Sakari Salminen gave Torpedo the lead in the second period before Filip Novak tied it up in the 58 minute. 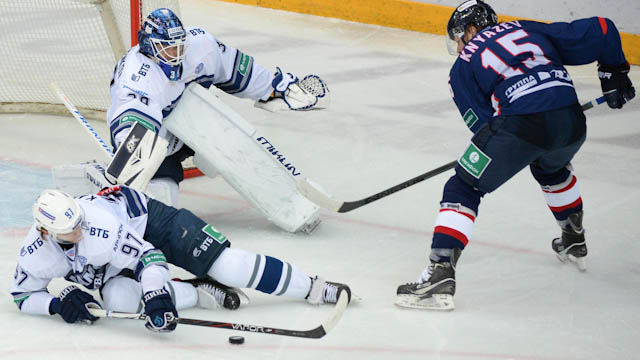 Yury Trubachyov’s goal midway through the second period set Severstal on the way to a slender victory at home to HC Sochi. Victory moves the home team to within a point of a play-off spot.

Avtomobilist inflicted a surprise defeat on Eastern Conference leader Ak Bars thanks to yet another shut-out from in-form goalie Jakub Kovar. The Czech had 35 saves, while two goals from Anton Lazerev and a third from Sergei Gusev set up a 3-0 win for the home team. 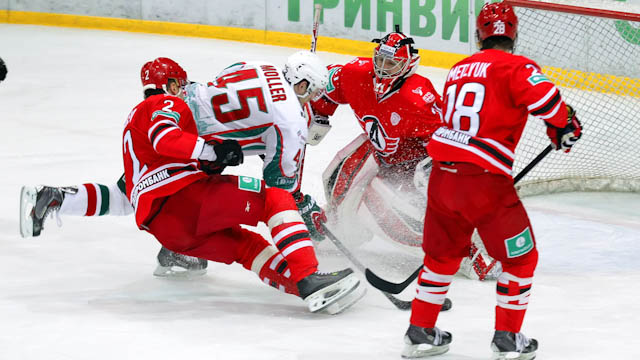