That was the story of Thursday’s game at Lokomotiv, with the home side racing into a 5-0 lead but eventually being pegged back to a more respectable 6-3 margin.

The first period started perfectly for the host, with Staffan Kronwall opening the scoring after just 66 seconds. That was the first of three goals in the opening six minutes as Atlant was almost blown away.

A change of goalie slowed the pace, although Ilya Gorokhov and Emil Galimov stretched the lead to five by the middle of the second stanza before a couple of quick goals from former Loko man Vadim Khlopotov and Artyom Chernov got Atlant on the scoreboard at last.

There would be no fairytale, though: Jonas Holos got Loko’s sixth before Nikita Soshnikov completed the scoring in the final session. 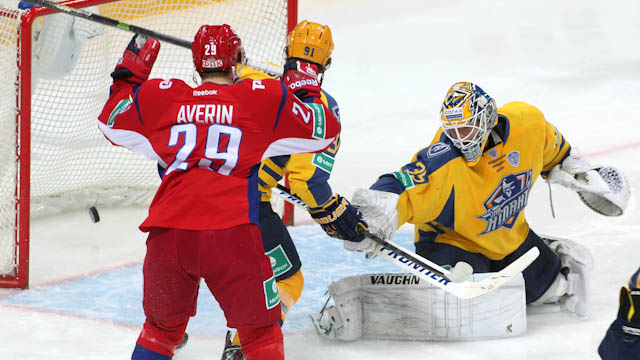 Sibir holds on to down Amur again
Sibir withstood a fight-back from Amur to pick up a 5-3 road win.

Although Dmitry Tarasov gave the home team an early lead, Sibir wasted little time in building a 4-1 lead. Jonas Enlund and Patrick Hersley both posted 1+1 and Dmitry Kugryshev and Stepan Sannikov also found the net as Sibir seemed to have complete control inside 23 minutes.

But after an Amur time out things began to change. Tarasov got his second and Anton Krysanov made it a one-goal game going into the final session.

Sibir was not to be denied though; after having the better of the closing stanza the visitor secured a second win in Khabarovsk thanks to a Dmitry Monya empty-netter.