Medvescak enjoyed an early Christmas present with a comfortable home win over Neftekhimik to snap a four-game losing streak. However the visitor saw its own winless run stretch to four following a 3-5 reverse in Zagreb.

After three home losses in a row Edwin Hedberg’s early goal did much to calm nerves among the home team and Ville Leino doubled the lead on a power play midway through the first period. Eric Beaudouin made it 3-0 early in the second.

Neftekhimik got on the scoresheet thanks to Igor Polygalov and Andrei Ivanov, but Mark Flood and Patrick Bjorkstrand ensured that Medvescak was never seriously troubled despite a late shorthanded goal from Maxim Rybin. 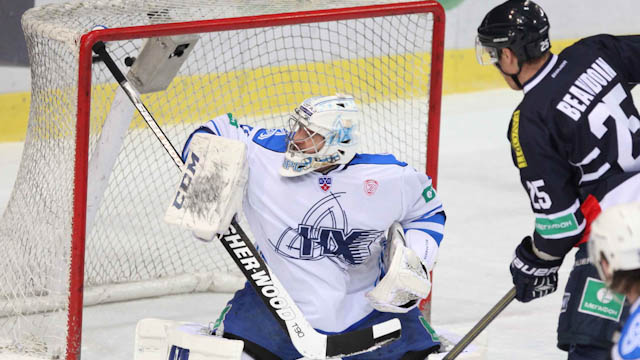 Moses is the main man
KHL top scorer Steve Moses was on the mark once again, scoring twice to help Jokerit to a 3-1 victory over Dinamo Riga.

Moses opened the scoring on a power play after just 86 seconds, but it didn’t take long for Dinamo to tie it up thanks to Gunars Skvorcovs. However, expectations of a high-scoring encounter were frustrated by a somewhat listless opening stanza. Moses made it 2-1 in the 18th minute from Jokerit’s second shot on goal in the game, and the first 20 minutes produced three goals from just six shots in total.

Linus Omark, who rushed back to Helsinki after yesterday evening’s Channel 1 Cup game for Sweden against Finland, added a third early in the middle session, scoring off a great Moses pass to convert a 5-on-3 power play and kill the game.

Ezhov’s heroics deny Slovan
Yury Petrov got the shoot-out winner for Lada at Slovan following a 2-2 tie. Tomas Netik pulled the host level in the 53rd minute but the win went to the visitor. Lada goalie Ilya Ezhov stopped 46 shots during the game and was impeccable in the shootout. 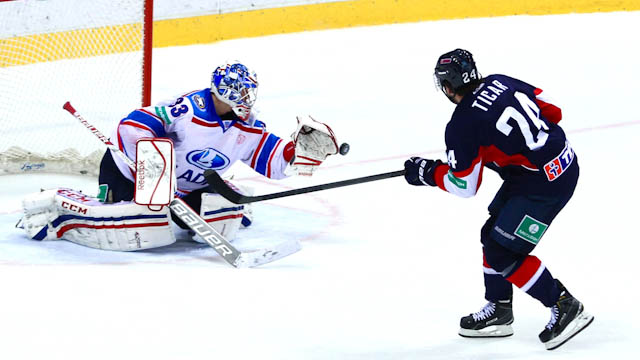