Friday in Sochi was a hockey-free occasion, a day of rest in the Channel One Cup, but this did not mean the resort went to sleep - quite the opposite, thanks to the tireless efforts of Alexander Medvedev. The KHL’s first president, known for his passion for sport of any kind, had planned a day of entertaining events and cheerful gatherings, including a unique tournament which brought together world-famous stars of tennis and hockey. It may be hard to imagine, but here, on the clay courts of Sochi, it happened: Marat Safin and Sergei Fedorov playing doubles against Pavel Bure and Anastasia Myskina; Yevgeny Kafelnikov and Andrei Malkov versus Alexander Medvedev and Martina Hingis. There were more - many more: Andrei Kovalenko, Alexei Yashin, Dmitry Tursunov, Iva Majoli, Elena Vesnina, Ekaterina Makarova… 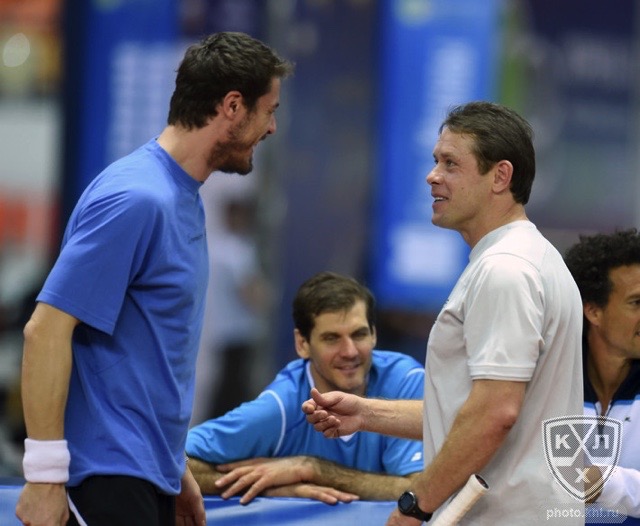 “I have not abandoned hockey for tennis; I’m combining them,” said Alexander Medvedev before the tournament. “The idea was very simple: use the time for the Channel One Cup to promote both hockey and tennis. In the short time we had to organize the event, we found companies and people willing to help, be it with money or through the work they put for the tournament. All the players will give 100%, and while I’m sure you’ll understand that many of them are masters only at hockey, I’m equally sure that you’ll really enjoy the spectacle.”

Many of the players from Team Russia attended the opening of this tournament, including Alexander Yeryomenko, the hero who kept the Finns off the scoreboard the previous day. The Dynamo Moscow man is in such fine form that he must have been tempted to pick up a racket, but in the end he watched calmly from the stands.

“I would love to play, but yesterday was a really tough game,” admitted Russia’s goaltender. “I wanted to get onto the court, but I couldn’t justify it with the risk of injury.”

Thankfully, there were enough stars present to turn every match of the tournament into a mini-performance. It was good to see Yevgeny Kafelnikov, looking slim and fit again having shed a few excess pounds. It was just as pleasant to see Marat Safin with his permanent smile, the sleek and slender Martina Hingis and the utterly charming Anastasia Myskina. In such company, the imposing bulk of KHL Players’ Union chief Andrei Kovalenko was certainly easy to find, but he turned in a surprisingly impressive performance with the racket. Maybe we should have predicted Kovalenko’s hidden tennis talent – the Albertville Olympic Champion is known for his hatred of losing, and is even rumored to be over-competitive at dominoes. He was already dripping with sweat a few minutes into the first game, and in the semi-final against Alexander Medvedev he looked as fierce as if he’d found an unfavorable hidden clause in a collective bargaining agreement. More predictable was the superb performance of the husband-and-wife pair, Maxim Afinogenov and Elena Dementieva. The Vityaz forward only sat out three games, and was charging around the court like a natural. 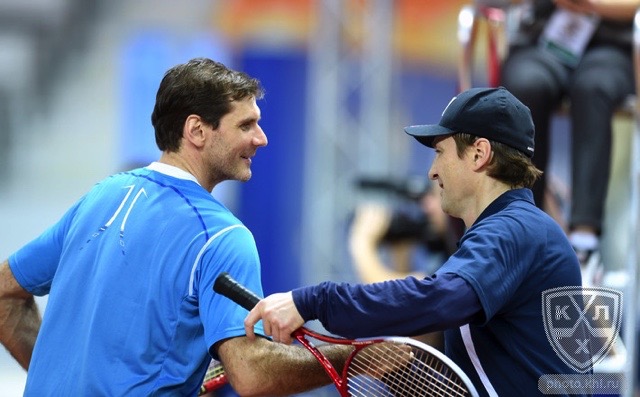 “In fact, I haven’t played tennis for a year and a half,” Afinogenov said later. “I used to play with my wife all the time, but since our daughter was born we’ve had no time for tennis. We still adore the game; we always watch it, and if there is a chance to pick up a racket, I never refuse. The skill hasn’t deserted me; it came back quickly to me today, so I was happy to get a game.”

“Are any other hockey players as good at tennis as you are?”
“There’s Sergei Fedorov, Pavel Bure. I’ve played with Slava Kozlov, and he’s very good, as is Ilya Kovalchuk.”

"Did Vityaz happily give you permission?”
“Yes, the team knew that I was going to this tennis tournament in Sochi, and they didn’t mind. Tomorrow I will be back to prepare with the team for a friendly against Dynamo."

The eight teams in the tournament were divided into two groups of four, who played on a round robin basis to determine the semi-finals. When the knockout stage arrived, Martina Hingis’s team prevailed over that of Elena Vesnina, and Elena Dementieva’s trio eliminated Pavel Bure. The final match in the tournament was a genuine treat to all who came, as the tennis stars got “serious,” with Dementieva and Majoli pitted against Hingis and Maria Goloviznina. So serious, in fact, that at times it was hard to believe we were not at Roland Garros, but in a tennis academy in a seaside resort (incidentally, the academy is named after Yevgeny Kafelnikov, a native of Sochi). The male partners, Alexander Medvedev and Maxim Afinogenov, played their part, and the former KHL President won several vital points at the net and from the back of the court, helping secure a 6-4 victory. 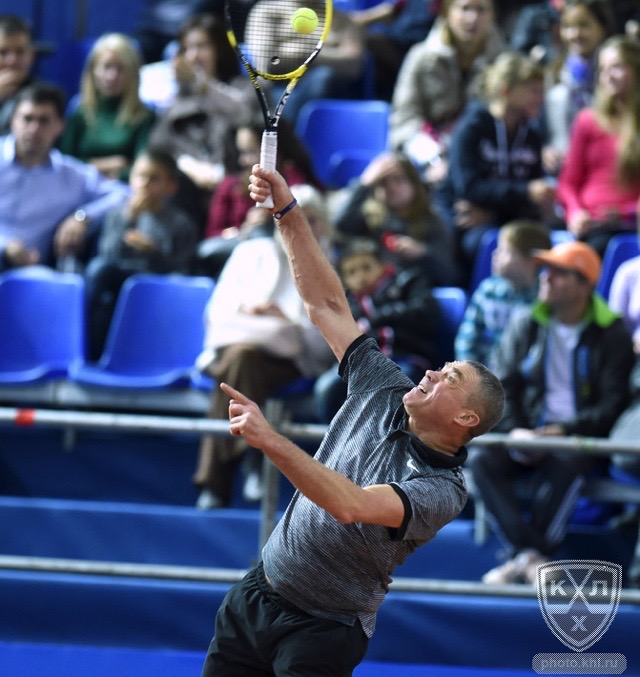 “With partners such as these two ladies, it would be a sin not to win,” said Alexander Medvedev after the ceremony. He also expressed his desire for the tournament to continue.

Shamil Tarpishchev, head of the Russian Tennis Federation, agreed: “This should be an annual tournament and it should get bigger. As for the timing, it is convenient to the tennis players, as it is their preseason. Maybe next time they can play in handcuffs, for example, or blindfolded. The important thing is to put on a show together, with the hockey players, since our sports are very close in spirit.”