League leader CSKA powered its way to the KHL summit on the back of 13 successive victories – but the sequence was broken before the international break with a 2-1 defeat at home to local rival Dynamo Moscow.

The teams had already proved that there was little between them when CSKA won a shoot-out at Dynamo following a 3-3 tie at the end of November and there was great anticipation ahead of this meeting before a sell-out crowd.

However the Blue-and-Whites proved stronger from the start, settled by an early Maxim Karpov goal owing much to a sloppy pass from Bogdan Kiselevich that his opponent intercepted in center ice.

A hard-fought middle session produced no further goals, and few clear chances, but saw a continuation of the controversy between Evgeny Artyukhin and Dynamo this season. In the previous game CSKA’s uncompromising forward kneed Alexei Tereshchenko, injuring his rival so badly that the Dynamo forward has not played since. This time it was young defenseman Gleb Koryagin who suffered a similar assault; Artyukhin was ejected from the game but happily Koryagin was able to resume his role in the third period.

That period began with a second Dynamo goal, again scored by Karpov but this time the marker was created by Martins Karsums’ rush, drawing two defensemen to him before picking out his team-mate all alone in front of the net. CSKA pulled on back quickly though Damir Zhafyarov but could not force an equalizer as that proud winning run came to an end. 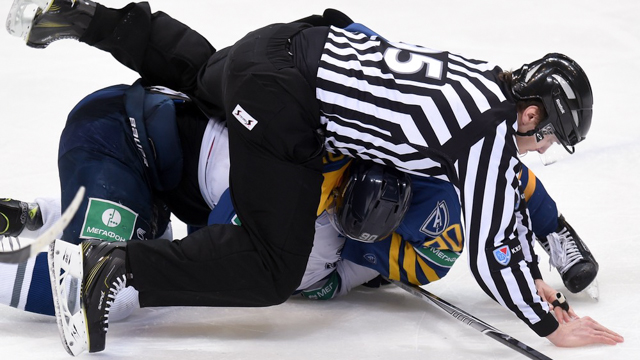 Runaway Loko flattens Sochi
The international break may be arriving at just the right time for Sochi: after an impressive 10-game winning streak the league newcomer lost 9-2 at home to Lokomotiv just two days on from a 6-1 home defeat against Dynamo.

The damage was done in the second period after Loko managed just one marker in the first through Geoff Platt. But six goals in the middle session put the game far beyond Sochi, Yegor Averin leading the way with two of them as he got used to the Sochi ice where he will be representing team Russia in next week’s Channel 1 Cup.

The third period saw two more goals, with Kirill Kapustin getting his second of the night as well to help Loko record its biggest win of the season and condemn Sochi to its heaviest defeat of its debut campaign.

Engren stops Avangard
Avangard missed the chance to rejoin Ak Bars at the top of the Eastern Conference after being frustrated by Atlant’s Atte Engren.

The Finnish goalie made 40 saves to help his team claim a 3-1 victory that maintains Ak Bars’ 3-point cushion in the East, and despite Avangard’s dominance throughout the game it wasn’t until the 46th minute that Roman Berdnikov finally turned shots on goal into a score on the board.

By that time Atlant had demonstrated how to do it: from a meager crop of chances the home team managed to build a 3-0 lead. Igor Levitsky and Andreas Engqvist scored late in the first; Nikita Soshnikov added another in the last minute of the second. 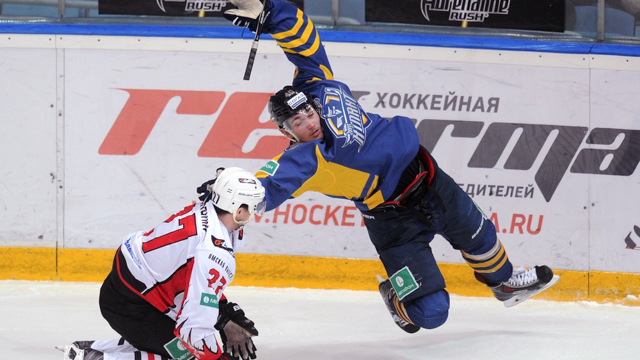 Around the league
Torpedo snapped a five-game losing streak in some style, handing a 5-1 drubbing to Vityaz. The damage was done early with the home team racing into a 4-0 lead in just 10 minutes before Vyacheslav Solodukhin pulled one back for Vityaz. Kirill Knyazev led the Torpedo scoring with two goals.

Three goals in the final session lifted Dinamo Minsk to a 5-2 win over Barys, maintaining the Belarusians’ impressive run of form. Matt Ellison, Jonathan Cheechoo’s second of the game and finally Alexei Kalyuzhnyput the game beyond Barys after the visitor had clawed back a 0-2 deficit.

Two goals from Ilari Melart set Ugra on its way to a 3-1 win at Amur. The Finn cancelled out Evgeny Orlov’s first-period opener for the host with two second-period markers before Ivan Yatsenko wrapped it up late on.

Patrik Hersley was the key figure in Sibir’s 4-3 win over Lada. He had a goal and two assists as his team held on after Lada steadily eroded a 3-0 advantage. Jarno Koskiranta claimed the winning goal in the 47th minute, slowing a revival that began with two strikes from Denis Barantsev.

Admiral beat Traktor in a shoot-out after a 3-3 tie in Vladivostok. Richard Gynge and Niclas Bergfors both found the net with their penalty shots to condemn Traktor to defeat in a game it had twice led.

Metallurg Novokuznetsk made it two wins in a row with a shoot-out success over Neftekhimik. Ansel Galimov settled the outcome after the teams tied 2-2 in regulation.

Salavat Yulaev finished a difficult week with a 3-1 win at Medvescak. Evgeny Skachkov and Yegor Dubrovsky put the visitor 2-0 ahead before James Wright pulled one back for Medvescak. Andrei Zubarev’s empty-netter wrapped up the points. 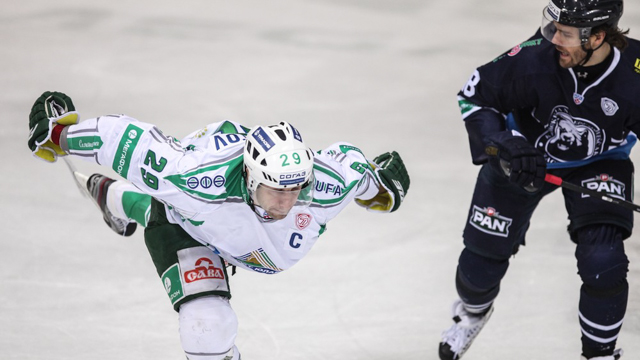