Steve Moses scored twice to help Jokerit to a 4-3 win at Metallurg Magnitogorsk.

The game was tied at 2-2 when Moses got his first, leading a counter attack and picking his spot as Evgeny Biryukov backed off. Then, with the scores at 3-3, Moses struck again early in the third, scoring with a back-hander after another solo surge.

Earlier Moses had been the architect as Jokerit opened up a 2-0 lead with a pair of power play goals in the first period. His pass picked out Linus Omark to open the scoring in the sixth minute and he also fed Ville Lajunen for the Finns’ second.

But Magnitka hit back in the second with Jan Kovar scoring on a screened Henrik Karlsson before Oskar Osala tied it up. Chris Lee also found the net, again on the power play, with a powerful effort to make it 3-3 but it was Moses who would have the final word. 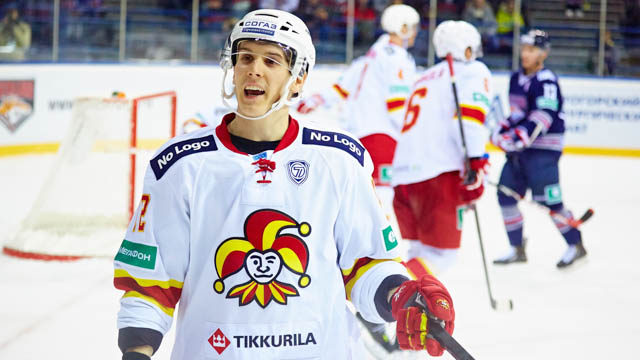 Ak Bars shoots down SKA
Ak Bars won the game’s big day, seeing off SKA 3-1 in Kazan to move three points clear at the top of the Eastern Conference.

Ilya Nikulin set the tone in the second minute, thumping home a trademark slap shot from the point to open the scoring.

However the opening session was fairly even and it wasn’t until the second period that Ak Bars began to take greater control of proceedings. Even then it took a long time to add a second goal: Alexander Burmistrov finally getting one past Mikko Koskinen after a neat passing move involving Kirill Petrov and Oscar Moller.

SKA dominated much of the third, outshooting Ak Bars 14-2, but still went further behind as Nikulin got his second of the game in the 48th minute. However, even if the result was beyond doubt the Army Men still managed to maintain a proud record of scoring in every single game so far this season. Anton Burdasov made it 3-1 in the 55th minute. 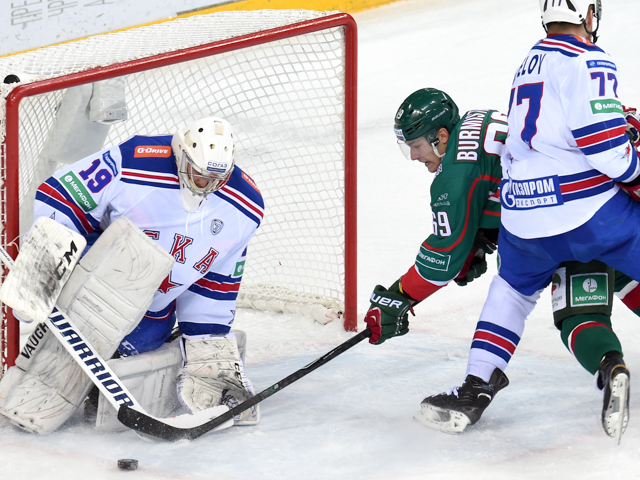 Dinamo too strong for Avto
Dinamo Riga picked up a handy 3-0 win at Avtomobilist as Jakub Sedlacek produced a 26-save shut-out.

Charles Genoway opened the scoring in the 11th minute but it took a long time to kill off the game. The score remained 1-0 until the final minutes when Miks Indrasis and Lauris Darzins sealed the win.