Steve Moses scored his 24th of the season to move to the top of the KHL goalscoring chart and lift Jokerit to a 2-1 victory at Ak Bars.

The American forward scored in the ninth minute, profiting from a rare stumble in possession by defenseman Konstantin Korneyev to get one-on-one with Anders Nilsson and fire home.

That goal put him out in front of Barys’ Nigel Dawes in the scoring race and gave Jokerit a 2-0 advantage on the night after Niklas Hagman’s power play goal gave the Finns the lead a minute earlier.

Ak Bars battled back hard but after Ilya Nikulin reduced the deficit with a one-timer off Justin Azevedo’s pass the home team couldn’t find a way to tie the game.

The defeat means Ak Bars failed to move clear of Avangard at the top of the Eastern Conference. Jokerit remains third in the West. 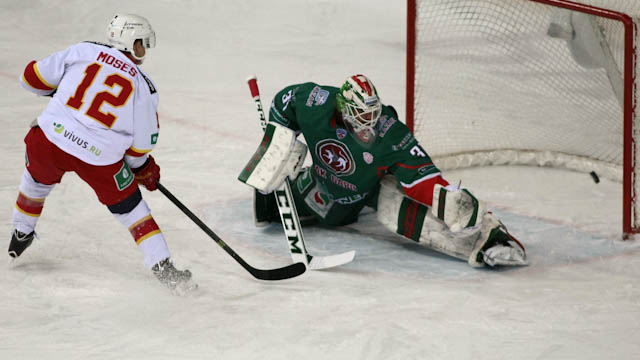 Magnitka gets past Dinamo
Metallurg Magnitogorsk edged out Dinamo Riga – but only after withstanding a strong fightback from the Latvians.

The home side took control of the first period with a goal for each of its prolific first line, Danis Zaripov, Jan Kovar and Sergei Mozyakin stacked up against a Miks Indrasis marker for the visitor.

Kovar stretched the lead to 4-1 40 seconds after the restart and it seemed that the defending champion was on course for a comfortable win.

But Dinamo had other ideas: three goals in the middle session saw Mikelis Redlihs, Linus Videll and Oskars Cibulskis tie the game at 4-4.

Suddenly it was anyone’s game, but Chris Lee’s strike early in the third period gave Magnitka a slender advantage that it held to the end.

SKA breezes past Avtomobilist
SKA strolled to a 5-1 win at Avtomobilist thanks to a quick start in Yekaterinburg.

There were just 55 seconds on the clock when Vadim Shipachyov went one-on-one with goalie Jakub Kovar, only to be hooked back by Alexei Simakov; from the resultant penalty shot Shipachyov opened the scoring.

Then two goals in 30 seconds midway through the first period put SKA in complete control. Artemy Panarin made it 2-0 on a breakaway then Patrick Thoresen finished off a neat passing move. 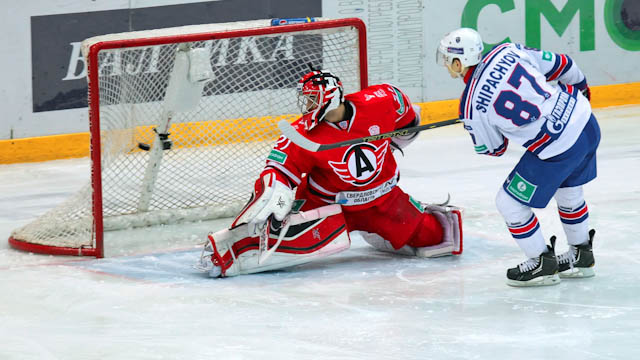