The Russian term for a shut-out literally translates as a ‘dry game’ – and by those standards Eastern Conference teams were pretty well parched on Monday.

Five games from eight featured a shut-out – and all five toothless offenses came from the East. The driest spot of all came in Siberia, where the games at Sibir and Metallurg Novokuznetsk were both settled by a single goal, and both times in favor of the visitor.

Traktor produced its first shut-out of the campaign to win at Sibir, thanks to 35 saves from Michael Garnett and a 44th-minute Deron Quint goal.

In Novokuznetsk it also took a third-period goal to give Ugra its fourth win on the spin. In-form Nikita Gusev scored his third in four games while Stepan Goryachevskikh had 29 saves as the Khanty-Mansiysk team made it three shut-outs in four.

Neftekhimik’s Alexander Sudnitsyn was the first goalie to claim a shut-out, making 30 saves in his team’s 2-0 win at Amur. Again the scoring came late, with Yegor Milovzorov breaking the deadlock on the power play in the 48th minute and Igor Makarov adding an empty-netter.

In Vladivostok it was Lada whose offense stalled as Admiral sailed to a 3-0 success. Oleg Li opened the scoring in the seventh minute and second-period strikes from Niklas Bergfors and Richard Gynge made the game safe. Ivan Nalimov had 24 saves. 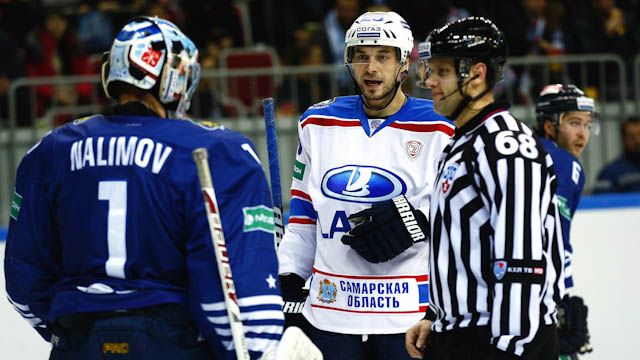 The final shut-out was also the most comfortable win: Dinamo Minsk overcame Salavat Yulaev with a 4-0 verdict. Nick Bailen opened the scoring in the last second of the first period before the prolific combination of Matt Ellison and Charles Linglet stretched the lead out to 3-0 in middle session. Alexander Materukhin completed the scoring in the last minute; Danny Taylor stopped 16 shots from Salavat.

Avangard approaches Eastern summit
Avangard moved level on points with Ak Bars at the top of the Eastern Conference thanks to a 5-3 win at Slovan.

The visitor took control in the first period thanks to three goals. Denis Kulyash, Sergei Kalinin and Denis Parshin did the damage, while Konstantin Barulin made 17 saves against a lively Slovan offense.

Slovan made a breakthrough late in the second, Rok Ticar pulling it back to 1-3, but Alexander Perezhogin scored twice in the final session.

While Avangard flies high in the East, defeat here leaves Slovan at the foot of the Western Conference, level on points with Medvescak.

Brandon Bochenksi scored twice in the last two minutes to lift his team to a 5-3 victory, although Barys had twice seemed on the road to victory before as a Nigel Dawes hat-trick saw the Kazakhs 2-0 up, then 3-2 ahead in the 56th minute.

But the home side proved resilient: Edwin Hedberg and Pascal Pelletier pulled back the 0-2 deficit and Pelletier got his second of the night to tie it at 3-3 just moments after Dawes’ third marker.

However, with overtime looming, Bochenski supplied the decisive blows to get Barys back to winning ways at last. 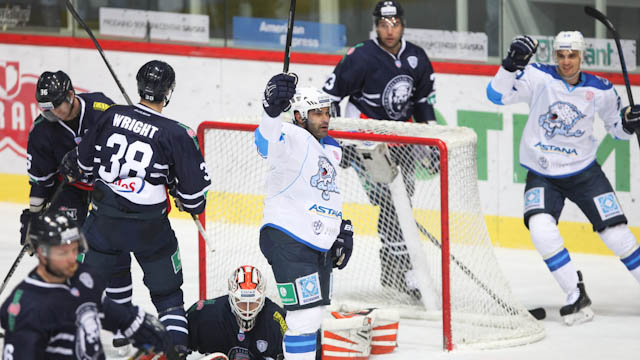 Sochi recovers to beat Severstal
Both teams made it onto the scoresheet in Cherepovets, but after 40 minutes of this one it looked like the home team might be celebrating yet another shut-out.

Severstal opened up a 2-0 lead, with both goals coming from Andrei Shefer. But in the third period Andre Petersson and Cory Emmerton tied it up and Sochi went on to win it in a shoot-out. Emmerton and Andrei Kostitsyn both found the net; Tomas Popperle kept Severstal at bay.