Dynamo Moscow picked up its third win of the season against SKA – but had to rely on a game-winning performance from goalie Alexander Yeryomenko as the visitor dominated for much of the evening.

Yeryomenko made 41 saves to help his team to a 2-1 victory; at the other end Mikko Koskinen faced just 18 efforts as Dynamo’s offense was limited to occasional counter-attacks for long periods.

But a goal from Gleb Koryagin put Dynamo 2-1 up with barely six minutes left thanks to great work from Maxim Karpov. The young forward jinked his way toward Koskinen’s net and as the Finnish goalie anticipated a shot, Karpov intelligently pushed the puck back for Koryagin to fire gleefully into a gaping target.

That was the home team’s second power play goal of an evening in which it struggled to make any headway when the teams were at equal strength, but managed to exact maximum punishment for SKA’s two infractions.

For much of this game it was a battle between Dynamo goalie Yeryomenko and SKA’s offense. As early as the first power play for the visitor, Yeryomenko had to be on top of his game to make a smart double stop to deny Artemy Panarin.

Dynamo quickly punished that miss, winning a power play of its own when Yury Alexandrov tripped Denis Mosalyov on the slot. Kaspars Daugavins profited from the extra man, but enjoyed some good fortune as his pass across the face of Koskinen deflected into the net off the skate of defenseman Roman Rukavishnikov.

But the home side still struggled to develop any momentum in the game and the second period at times felt like a SKA procession. Yet for all the visitor’s pressure, it seemed that an outstretched arm or leg from Yeryomenko was always there to save Dynamo. On the one occasion the goalie was beaten, Tony Martensson saw his effort hit the frame of the goal and bounce to safety.

The third session followed the same pattern until SKA finally tied it up with 10 minutes left. Andrei Kuteikin stepped up from the point and launched a mighty blow that flew through a crowd of players and left the goalie – finally – with no chance. Moments later Yeryomenko came to the rescue once again, stretching out a stick to stop Dmitry Kalinin’s low shot after Panarin’s defense-splitting pass gave a clear sight of an almost open goal.

It seemed like a matter of time before SKA went ahead, but Viktor Tikhonov’s needless penalty cost his team dear and Yeryomenko – inevitably – produced one last game-changing save to deny Martensson the best chance for a Petersburg equalizer. 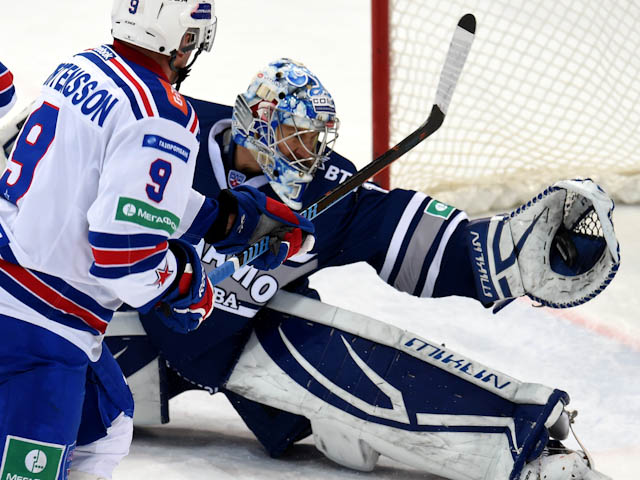 Atlant too strong for Dinamo Riga
The home team took control of this game with two goals in two minutes early on. Albert Yarullin put Atlant ahead and Sergei Shmelyov quickly doubled that advantage. Andris Dzerins gave Dinamo brief hope of a recovery but there was no way back. Igor Levitsky and Petr Vrana added further goals to give Atlant a 4-1 success. 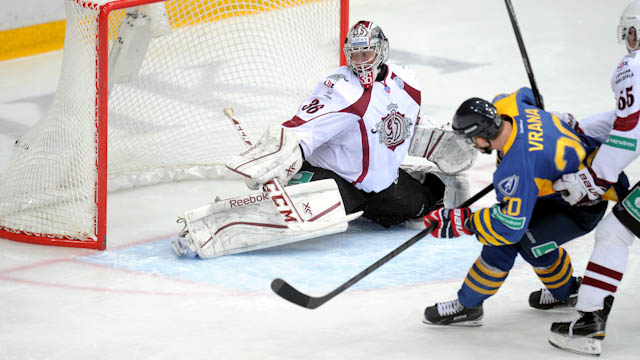