Table-topping CSKA made short work of Lokomotiv in Yaroslavl, cruising to a 4-0 victory and stretching its winning run to 12 games. But the Army Men were given more than a little help from the opposition as defensive errors from Lokomotiv contributed to the first two goals.

Andrei Loktionov was at fault for the first – his pass along his own blue line was easily cut out by Igor Grigorenko and the CSKA man advanced to fire past Vitaly Kolesnik. 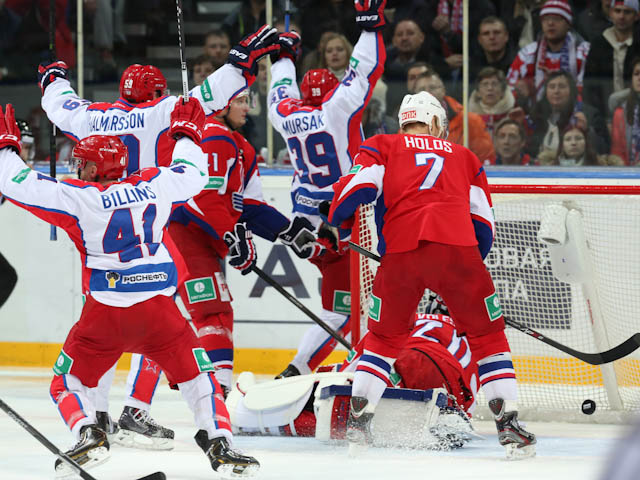 The second came as Loko looked to convert a power play: Petri Kontiola was caught in possession by Andrei Stas and the Belarusian international raced away and beat Kolesnik with a shot that the goalie might have dealt with more convincingly.

Kolesnik, recalled to the team ahead of Curtis Sanford for his first start since Hallowe’en, continued his unhappy evening in the second period: Stephane da Costa’s shot went high but the rebound off the glass clipped the back of the goalie and Jan Mursak pounced to force home the puck.

Grigorenko got his second of the game in the third period, scoring on the rebound from his own shot; Stanislav Galimov finished with 19 saves to complete his fifth shut-out of the season.