The game was settled early in the third as Dynamo stretched its 3-2 lead with two goals in a minute. Daugavins made it 4-2 with a well-placed shot before Kokarev’s pace saw him race clear to put the game beyond Torpedo.

Previously Dynamo had twice got in front only for the visitor to hit back quickly: Kokarev opened the scoring deep in the first but Juuso Heitanen responded before the intermission, then Janne Jalasvaara’s goal was quickly cancelled out by Wojtek Wolski. But Daugavins made it 3-2 in the 36th minute and Torpedo ran out of answers. 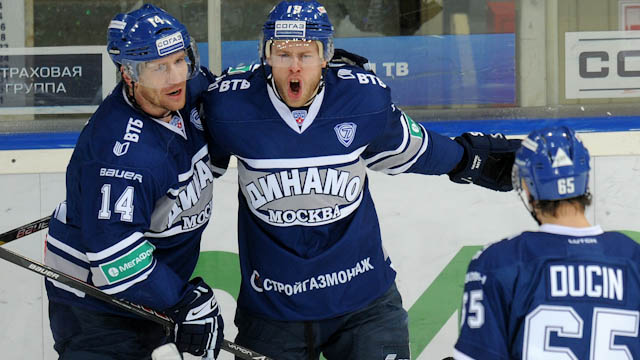 It took a strong defensive display to neutralize one of the liveliest offenses in the KHL, with Anders Nilsson in particularly impressive form at times to help his team to victory in an entertaining encounter.

Jokerit opened the scoring in the 12th minute through a Ryan Gunderson power play goal, but Kirill Petrov hit back two minutes later to ensure the game was tied at the first intermission.

In the second session Ak Bars got in front thanks to a well-worked counter-attack that ended with Igor Mirnov feeding Vladimir Tkachyov for a deceptively simple finish.

But it was two goals early in the third that settled the course of the game. Ak Bars had hit the post twice in the first minutes of the final session and a penalty on Niko Kapanen enabled the visitor to tighten the screws still further. Jokerit just about held on, but Ilya Nikulin made it 3-1 as his former team-mate was climbing out of the penalty box. Mirnov set up Artyom Lukoyanov to make it 4-1 soon after and there was no way back for Jokerit despite a late Petr Koukal strike to reduce the arrears.

Brust freezes out Magnitka
Barry Brust’s recent move to Ugra hasn’t seen the former Medvescak goalie immediately seize the #1 spot in Khanty-Mansiysk – but he made the most of his chance on Monday, recording a shut-out to help his team to a 3-0 win over defending champion Metallurg Magnitogorsk.

It was Ugra’s second shut-out in three days – Saturday saw the team win 4-0 against Avtomobilist – and once again Lukas Kaspar was on the scoresheet. He scored twice, one into an empty net, while Mikhail Mamkin’s first-period opener proved to be the eventual game-winner.

Magnitka has 39 shots at Brust, but couldn’t find a way past him as the team’s indifferent recent run continues.

Summanen left scratching his head
Avangard downed Admiral 4-3 but home coach Raino Summanen was less than impressed with the way his team gave up a 3-0 lead before winning it thanks to Chad Kolarik’s goal eight minutes from the hooter.

Sergei Kalinin scored twice and Denis Parshin made three assists as Avangard cruised through the first 27 minutes, but Richard Gynge and Ilya Zubov scored two in quick succession to put Admiral right back in the game.

Alexander Gorshkov’s power play goal deep in the second upped the pulse rate around Arena Omsk, but Kolarik had enough to keep Avangard ahead until the end.

Three goals in five minutes at the start of the second period set up Salavat Yulaev for a 3-2 win at home to Barys – and sent the Kazakhs spinning to a seventh defeat in a row. Evgeny Skachkov, Alexei Glukhov and Arturs Kulda did the damage; Nik Antropov and Kevin Dallman tried to haul Barys back into it. 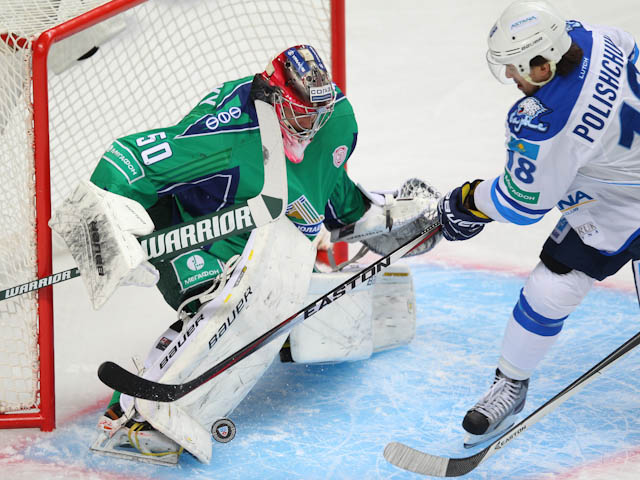 Slovan powered to a 5-0 win over Metallurg Novokuznetsk in Bratislava. Vaclav Nedorost opened the scoring in the first and three markers in the middle session put the result beyond doubt. Ladislav Nagy had three assists to lead the individual scoring, Jaroslav Janus made 18 saves for his shut-out.

Max Warn scored twice as Sochi came from behind to take a 3-2 overtime verdict against Severstal. Warn got the winner in a game that the visitors had twice led.

Goalies were on top in Podolsk where Vityaz and Atlant played out a 1-1 tie. The home team’s Harri Sateri ended up on the winning side in the end; he made two saves in the shoot-out and Nikita Vyglazov won it for Vityaz. 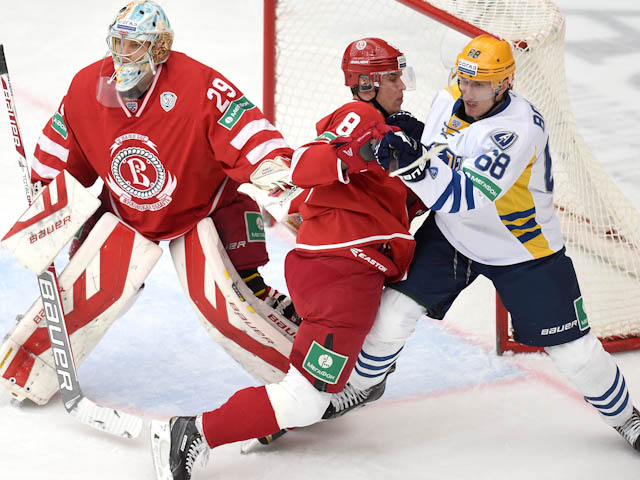 Viktor Bobrov scored twice, including the game-winner early in the third, as Sibir managed a hard-fought 3-2 success at Dinamo Riga.

Traktor’s home game with Avtomobilist was postponed due to an illness that swept through the Avtomobilist camp. The team stayed home in Yekaterinburg to recover and a date for the rearranged fixture will be announced shortly. Avtomobilist is due to return to the ice Wednesday at Lada.