Medvescak came from behind to snatch a 3-1 win at home to Vityaz in a game that followed a similar pattern to the one in Bratislava.

For long periods this was a game of few chances, with Vityaz content to defend the one-goal lead it claimed though Ivan Vereshchagin’s sixth-minute goal.

But two quick markers late in the second period set Medvescak on the road to victory. Mike Glumac tied it up and James Wright got the eventual game-winner in the 38th minute.

Glumac scored his second of the game into an empty net to seal the win and lift Medvescak to within five points of the top eight. 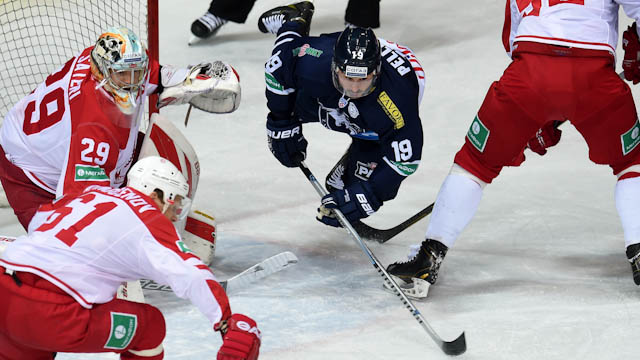 Loko picks up a win at Slovan
Lokomotiv came from behind to win at Slovan in a clash of two teams struggling for form.

The host had lost five of its previous six going into the game but was lifted by the only goal of the first period, scored by Vaclav Nedorost.

Lokomotiv turned it around in the second period. Sergei Konkov tied it up in the 26th minute and Emil Galimov made it 2-1 after 32. Yegor Averin settled the issue with an empty-netter late on.

The Yaroslavl team also confirmed that it was on the point of signing Andrei Loktionov. The former Loko forward has been without a club since he left Carolina Hurricanes at the end of last season.