On a night dominated by memories of the great coach Viktor Tikhonov, who passed away early on Monday morning, CSKA and SKA served up a fitting tribute in the KHL’s summit clash. 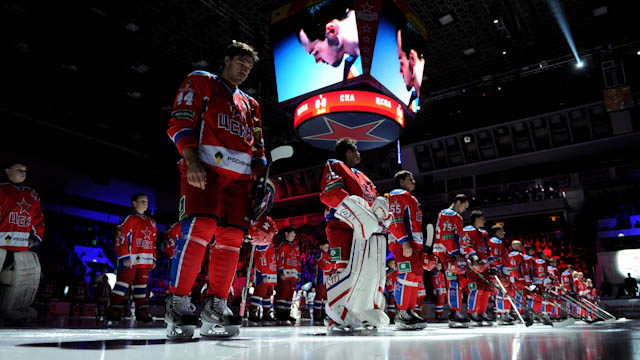 CSKA, the club Tikhonov turned into an invincible force, prevailed 5-3; Viktor Tikhonov Jr, the legend’s grandson, scored 2+1 for SKA and was warmly applauded by both sets of fans for his efforts.

As a mark of respect the sell-out crowd in Moscow refrained from its usual chants and drumming for the first period. Even the opening goal barely rippled the vow of silence, even though the slick execution of SKA’s top line, swinging the puck from left to right and back to the net for Jimmie Ericsson to score, was a passage of play that Tikhonov Sr’s own teams might well have recognized.

It was the first and last time SKA led in this game, though: Simon Hjalmarsson tied it up on the power play off an Alexander Radulov pass and in the dying seconds of the first period Evgeny Artyukhin smashed CSKA in front on a two-on-one breakaway. He picked his spot and shot early, catching goalie Evgeny Ivannikov out of position. 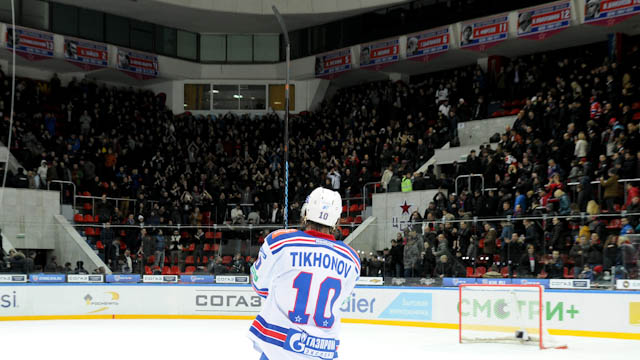 Tikhonov, who had told coach Vyacheslav Bykov that he was determined to play tonight despite the morning’s sad news, scored his first goal of the night in the 23rd minute, deflecting Andrei Kuteikin’s slap shot past Stanislav Galimov to tie the scores at 2-2 and he scored again on another power play late in the second period. In between times Hjalmarsson got his second of the night after a long spell of CSKA pressure ended with him firing home Jan Mursak’s pass.

Mursak then got the game-winner early in the third, profiting from a turnover in center ice and advancing to fire an unstoppable shot past Ivannikov. But defending a one-goal lead was an anxious experience for the home team and the tension showed at times, especially in Radulov’s reaction when Igor Grigorenko was called for a tripping penalty as his team looked to launch a dangerous counter-attack.

Radulov’s rage in St. Petersburg saw him ejected from the game last time the teams met, contributing to SKA’s 4-3 win last month. This time, though, he channelled his anger more effectively to score CSKA’s fifth with a lovely backhand finish with barely a minute to play. His huge celebration spoke much of the importance of the game for CSKA – both as a memorial to one of the club’s greatest names, and as a key staging post in this season’s championship race. 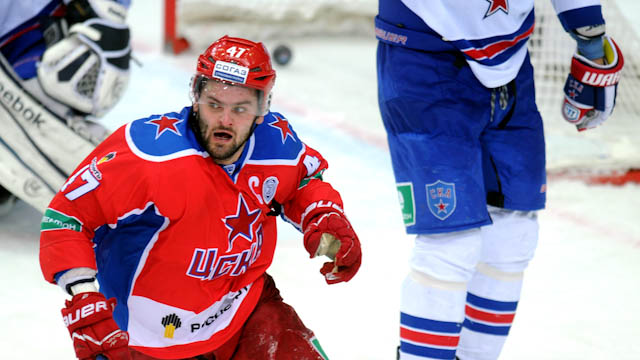 Not even the return of goalie Vasily Koshechkin could bring a change of fortune for Mike Keenan’s men as he came off second best in this duel with team Russia rival Konstantin Barulin.

Barulin made 33 saves to silence one of the KHL’s strongest offenses, while at the other end an early goal from Chad Kolarik set things in motion for the visitor. Two quick markers at the start of the second saw Miroslav Blatak and Alexander Perezhogin put Avangard in total command and Denis Kulyash wrapped it up late on.

The other big game in the Eastern Conference saw Ak Bars beat Barys 3-2 in Kazan. Two goals from Dmitry Obukhov in the second period turned this game the way of the hosts and keep Zinetula Bilyaletdinov’s men on top of the conference table.

Kovar celebrates club record
Goalie Jakub Kovar played his 52nd game in a row for Avtomobilist, and celebrated the club record with a shut-out in a 3-0 win over Salavat Yulaev.

The Czech made 27 saves to keep the visitor at bay and was particularly busy in the second period as Salavat out-shot Avto 13-2.

But the home side already had a lead to defend, thanks to Eduard Lewandowski’s 17th-minute opener, and third-period goals from Anatoly Golyshev and Aaron Palushaj secured the win. 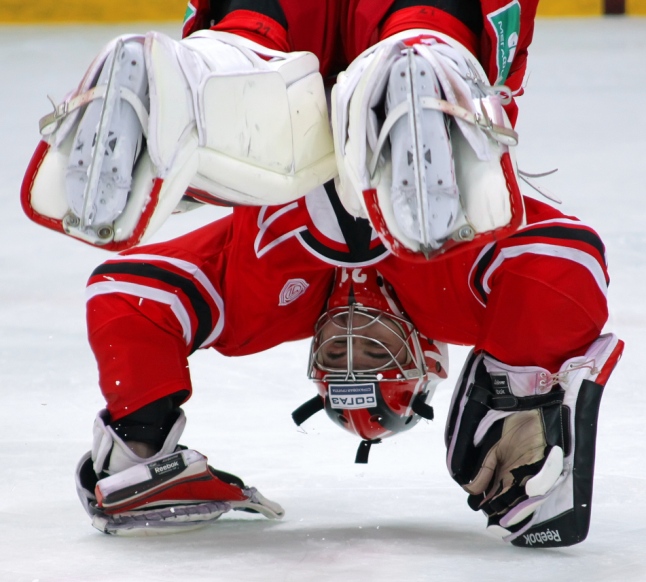 Jokerit recovered from 3-1 down to win at Dinamo Riga and keep up the pressure on the top two in the West. The first period was all about the Latvians storming into a strong position, but Linus Omark and Steve Moses pulled the scores back to 3-3 in the second. Atte Ohtamaa then put Jokerit ahead in the 48th minute and it finished 4-3.

The day started with the latest Far East derby, and Amur quickly took revenge for its defeat at Admiral with a 2-1 win. Sergei Teryayev and Mikhail Fisenko opened up a 2-0 lead; Richard Gynge’s power play goal cut the deficit late on.

Neftekhimik proved too strong for Ugra, powering to a 4-0 lead inside 40 minutes. Gleb Klimenko’s penalty shot got things started, and Andrei Ivanov, Teemu Eronen and Tim Stapleton also contributed. Ugra pulled two back in the third, but couldn’t save the game.

There was a similar scoreline in Minsk where HC Sochi downed Dinamo. Igor Ignatushkin scored twice and his line mates Ilya Krikunov and Andrei Kostitsyn had two assists each for the visitor.

Dynamo Moscow needed a shoot-out to beat Atlant after giving up a 2-0 lead. Matthew Gilroy and Maxim Potapov hauled Atlant level after Dynamo took control in the first period, but Konstantin Glazachev settled it in the shoot-out after a 2-2 tie.

Traktor came from 0-1 down to win 3-1 at home to Lada. Anton Glinkin’s second-period strike proved to be the game-winner after Konstantin Panov cancelled out Yury Petrov’s opener.