A three-goal blast early in the second period sent SKA spinning to a second successive defeat on its tour of the Baltic.

Following Thursday’s loss in Helsinki, the trip to struggling Dinamo Riga looked like an easier assignment on paper – and in the first period it seemed fairly straightforward on the ice as well. SKA had the better of the early exchanges and took a deserved lead into the first intermission thanks to Anton Burdasov’s goal 23 seconds before the hooter.

But it all changed when the teams emerged from locker rooms once again. It took just 37 seconds for Mikelis Redlihs to tie the scores, forcing the puck home at the second attempt after Lauris Darzins forced an error out of Yury Alexandrov on the boards.

Redlihs put Dinamo in front three minutes later with a powerful one-timer, wrapping up a move started by Darzins. Then in the 27th minute Andris Dzerins made it 3-1, turning the game on its head and leaving SKA with a battle on its hands.

Andrei Kuteikin got a goal back in the final session but Kyle Wilson’s empty-netter, his first goal since returning to Riga from Traktor, settled the issue. 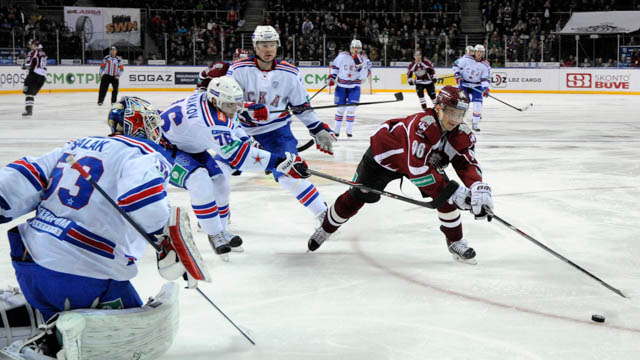 Unhappy homecoming for Magnitka
After a difficult time on its Far Eastern tour, Metallurg Magnitogorsk might have been hoping for better fortune on home ice. However the defending champion failed to impress against Salavat Yulaev, going down to an emphatic 6-2 defeat.

Veteran Kirill Koltsov got the visitor off to a strong start with two goals in three minutes in the latter part of the first period, and even though Francis Pare reduced the gap Salavat still looked the stronger team.

The middle session was hard fought, with only Ilkka Heikkinen’s power play goal to show for the teams’ efforts as Salavat extended its lead.

The game was put to bed in the third as Dmitry Semin and Evgeny Skachkov stretched the advantage to 5-1 before Sergei Mozyakin pulled one back. Magnitka bravely pulled goalie Alexander Pechursky late on, hoping to profit from a power play, but ended by giving up an empty net goal to Yegor Dubrovsky in the final second.

Ak Bars closing in
Ak Bars moved to within a single point of Magnitka at the top of the Eastern Conference with a 4-2 win over fellow high-flyer Avangard.

This game was tight until the last, but the visitor finally relinquished its 12-game run of picking up at least a point despite two goals from Denis Parshin.

The former CSKA man put Avangard ahead in the 13th minute, but Fyodor Malykhin and Mikhail Varnakov wiped out that advantage with two quick goals before the intermission.

After a goalless middle session Parshin struck early in the third to tie the game at 2-2, but Alexander Svitov’s power play goal in the 46th minute put Ak Bars back in front. Avangard’s late charge came to naught: Artyom Lukoyanov scored into the empty net to seal a home win.

Vityaz took a shoot-out win over Neftekhimik – but only after letting a 2-0 lead slip in the closing minutes. Vyacheslav Solodukhin and Dmitry Tsyganov put the home team in command, but Igor Polygalov reduced the arrears before Tim Stapleton tied it up in the last minute. Mario Kempe got the decider in the shoot-out. 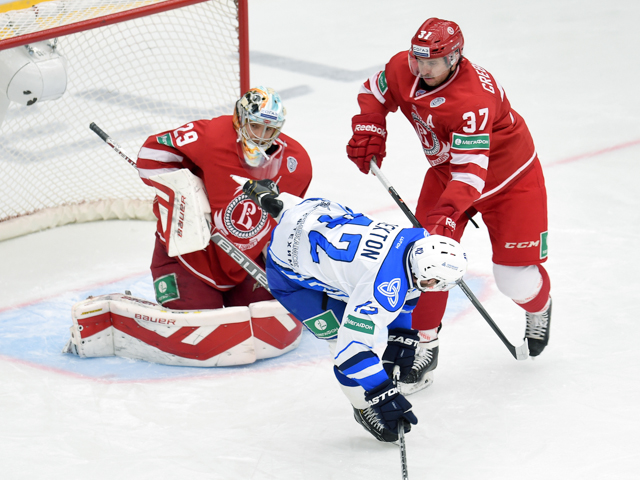 Jokerit followed up its 3-1 win over SKA with a similar scoreline at Medvescak. After a scoreless first period Johan Harju put the Finns in front in the second. Mark Flood tied it up, but Petteri Wirtanen reinstated the lead, to the fury of Pascal Pelletier, who was sin-binned for abusing the officials. Steve Moses made the points safe in the third period.

Two goals each for Alexander Chernikov and Alexander Streltsov led Lada to a 4-2 victory at Lokomotiv. The decisive action came at the start of the third as Lada’s two scorers posted two markers in as many minutes.

Tobias Viklund’s overtime goal gave Avtomobilist a 2-1 win over Barys. Earlier Roman Savchenko put the visitor ahead before Alexei Simakov tied it up at the start of the third.

Atlant left it late before winning in overtime at Severstal. The visitor trailed 3-2 to Pavel Buchnevich’s 48th-minute goal, but Andreas Engqvist with his second goal of the night tied it up with four minutes to go. Then Petr Vrana snaffled the winner 77 seconds into added time.