Jokerit sent out another reminder of its determination to challenge for top honors this season, earning an impressive 3-1 home win over SKA to prevent the Petersburg team from returning to top spot.

Steve Moses, Jokerit’s leading scorer this season, led the way with two goals. His first came at the end of an entertaining first period and wrapped up a fine move involving Jere Karalahti and Linus Omark, the Finns’ leading source of assists.

The second went to Petteri Wirtanen, making his Jokerit debut. He capitalized on a mistake by Ilya Kovalchuk in center ice and raced through to score on Alexander Salakmidway through the second period.

Kovalchuk was in the thick of things for much of the third period: first he took a stick to the face from Niko Kapanen, who was ejected from the game – much to the disgust of a sell-out Hartwall Arena crowd who felt that the Russian international had made the most of an accidental contact. Then, after he patched up his cuts and returned to the ice, Kovi himself was removed from the game after getting into a fight with Atte Ohtamaa.

In the last minute Artemy Panarin got a goal back for SKA. It didn’t change the outcome but it maintained his team’s record of scoring in every game so far this season. 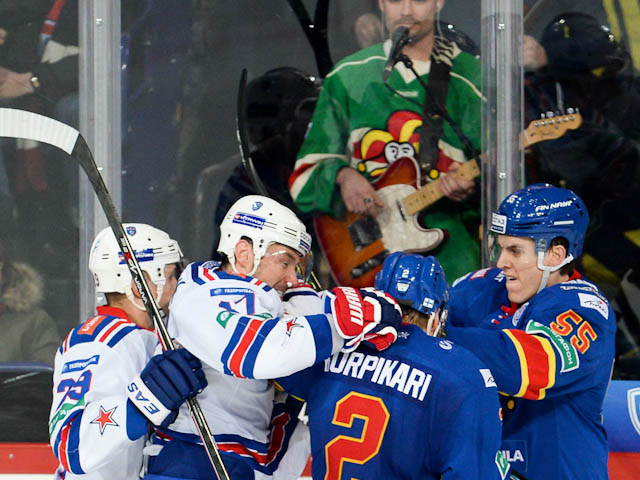 Avangard keeps up its streak
Avangard maintained its sequence of taking at least point, stretching the series to 12 games with a shoot-out win over Barys. The Omsk club has now taken 28 points from those games to return to the top of the Chernyshev division, keeping clear of a resurgent Barys in the process.

Avangard began strongly but had to wait until the second period before a slick interchange set up Erik Gustafsson for the opening goal. However that lead was wiped out in the third after a fight between Konstantin Rudenko and Nikolai Lemtyugov left Barys with a power play. Roman Savchenko got the goal; his long shot just beat Konstantin Barulin.

That was the end of the regulation time scoring; the shoot-out was settled by Chad Kolarik, the only man to score in the post-game sequence.

Lokomotiv eased to a 4-2 win at home to Neftekhimik. Emil Galimov opened the scoring the second minute, and goals in the middle session from Kirill Kapustin and Sergei Plotnikov put Loko in control. Dan Sexton gave Neftekhimik a fighting chance early in the third, but Daniil Apalkov soon snuffed out the revival.

There were no goals in Riga, where Dinamo faced Slovan. Jakub Sedlacek made 28 saves in regulation before shutting the door in the shoot-out while Linus Videll got Dinamo’s winner.

Vityaz suffered a disappointing 2-0 home defeat against Lada. Andrei Nikitenko and Georgy Belousov got the goals, Ilya Ezhov made 29 saves. 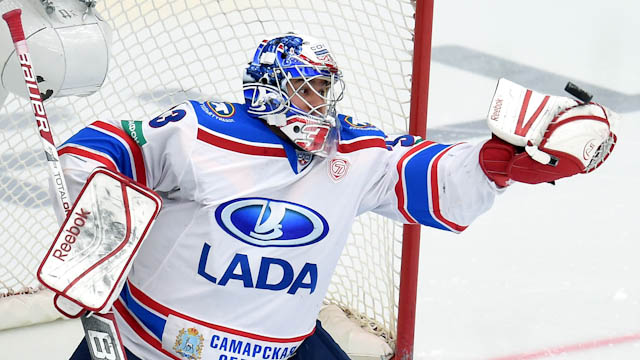