Dynamo Moscow eventually cruised to a routine 4-1 win over Ugra – but only after falling behind early on.

Ugra surprised Dynamo by taking the lead in the tenth minute. Ivan Yatsenko’s rush ended up with the puck bobbling between two defensemen and Igor Bortnikov was alert to the chance to force the disc over the line.

That lead lasted into the second period before Maxim Karpov tied it up and Denis Kokarev put the home team up with a well-placed one-timer at the far post off an Alexei Tsvetkov pass. Dmitry Sinitsyn collected his first ever KHL point for his part in the move.

Once in front Dynamo would not be seriously troubled again. Two goals in the final session sealed the win, with the front line combining in the 48th minute for Maxim Pestushko’s power play goal. The fourth was initially awarded to Martins Karsums, but the announcer later amended that to give Tsvetkov the goal. His weaving behind the net caused confusion in front of the goal and as he fired the puck across the face of Mikhail Biryukov it deflected home off a defenseman as Karsums pressured him on the slot. 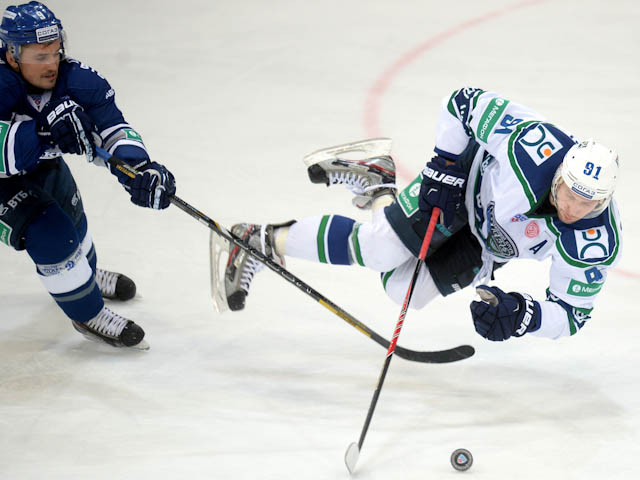 CSKA marches to the summit
CSKA went to the top of the KHL table with a 3-0 win over Severstal. The teams met again just days after the Army Men handed out an 8-2 thrashing in Moscow, and it didn’t take long for the Red-and-Blues to get in front again here.

In the sixth minute Vladimir Zharkov made light of a Severstal power play. Racing on to an Andrei Stas pass he scored on Jakub Stepanek in a one-on-one.

However Severstal put up more resistance than they managed in Moscow, dominating much of the first period as CSKA hit penalty trouble. Kevin Lalande had to be alert in the visitors’ net to preserve that 1-0 advantage.

The second period was scoreless, but the third opened with a reminder of how CSKA put Severstal to the sword four days ago. Alexander Radulov, who posted six points that night, claimed an assist as Igor Grigorenko added to the four goals he plundered when the teams last met. Stas added to his first-period assist with a goal of his own in the 54th minute to put the outcome beyond doubt; Lalande finished with 26 saves.

Old boys combine to sink Medvescak
Medvescak faced four of its former players when Dinamo Minsk came to town – and three of them combined for the Belarusians to equalize late in the first power play.

Ryan Vesce and Matt Ellison provided the ammunition for Charles Linglet to cancel out Pascal Pelletier’s opener and set Dinamo on course for a 5-2 win that snapped a five-game losing streak.

Linglet later fed Vesce for an empty-netter to seal the victory; Dmitry Meleshko, Alexander Materukhin and Artur Gavrus were the other Minsk scorers.

Traktor stuck in second stanza
HC Sochi handed enjoyed a comfortable home win over Traktor, closing the gap at the foot of the Western Conference to a single point. The Leopards took control in the second period with four unanswered goals scored by Max Warn, Evgeny Lapenkov, Andre Petersson and Igor Ignatushkin. Martin Ruzicka pulled one back early in the third for Traktor, but the visitor couldn’t improve on a 4-1 scoreline. 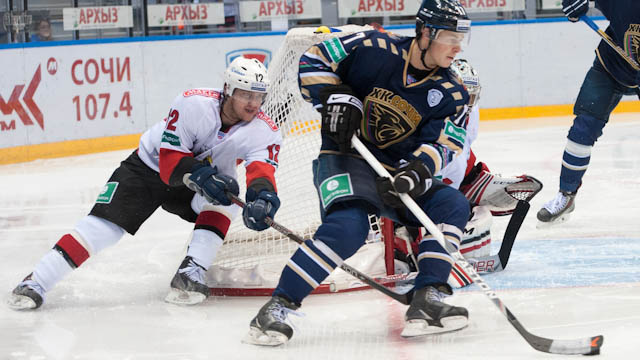