Alexander Radulov, back from a one-game suspension, wasted little time in posting his 300th assist in KHL hockey and helped long-serving strike partner Igor Grigorenko to four goals in an 8-2 home win over Severstal.

The enforced rest obviously agreed with Radulov who returned to action with a commanding display, posting 1+5 as CSKA piled up a second big win in three days after thrashing Salavat Yulaev 7-0 on Friday.

Just two-and-a-half minutes into the game Radulov collected a Sergei Andronov pass, took around the net and saw his effort on the wraparound rebound kindly for Grigorenko to open the scoring.

The home team was also in devastating form on the power play and the same trio combined once again to double the lead in the sixth minute. Radulov’s shot was blocked and Grigorenko was the man on the spot to press home the first numerical advantage of the evening.

But just when it looked like becoming a long night for Severstal, David Ullstrom scored from close range, capitalizing on a turnover after Pavel Chernov caught Alexei Bondarev napping on the blue line. Soon after CSKA’s PK had to demonstrate it was as effective as the team’s PP, producing a strong display of controlled defensive hockey to keep the visitor at bay until the first intermission.

Early in the second Radulov found the net himself, converting CSKA’s second power play of the game with a wristy one-timer that clipped the underside of the bar.

And goal number four for the Army Men owed much to the understanding that Radulov and Grigorenko have built up over six seasons together at Salavat Yulaev and now CKSA. Radulov went round the back and fired the puck across the face of the net; Grigorenko was on hand at the far post to touch home his hat-trick goal.

Severstal got one back through Anatoly Nikontsev just before halfway but Nikita Zaitsev scored off a Radulov pass to make it three goals from three power plays before Georgy Misharin found the net in a rare Radulov-free moment. Roman Lyubimov fired in the seventh as CSKA produced an overwhelming second-period show for the second game running.

The final session never reached those heights, but there was still time for the Radulov-Grigorenko axis to work once more. The former worked his magic behind the net yet again, and Grigorenko was on hand to get his fourth of the game. 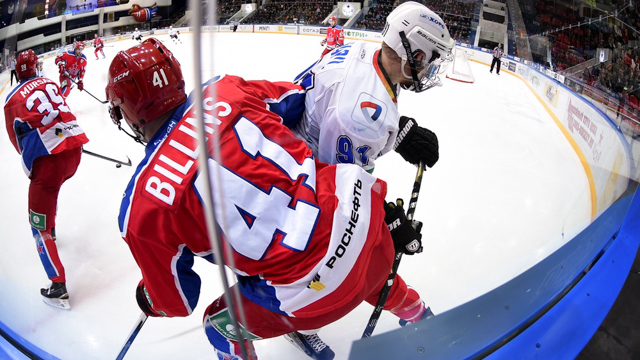 Contrasting fortunes in the Far East
Eastern Conference heavyweights Metallurg Magnitogorsk and Ak Bars are both making their long road trip to the depths of Siberia and Russia’s Far East – and the two teams are having very different journeys.

For Ak Bars, whose 3-1 win at Metallurg Novokuznetsk moved it to the top of the conference, it’s been a happy experience; for Magnitka, which has lost all three games on the road so far, it’s been a frustrating affair.

Ak Bars latest success wasn’t as comprehensive as its wins in Khabarovsk and Vladivostok, but it was still good enough to despatch Kuznya. Alexander Svitov’s power play goal gave his team the early edge, and Dmitry Obukhov stretched that lead in the third. Sergei Dorofeyev pulled one back for Metallurg, but Justin Azevedo made the points safe with a last-minute empty-netter.

For Magnitka, looking to recover from defeats at Sibir and Kuznya, things started out OK at Amur. Chris Lee gave the team a 1-0 lead midway through the first period. However, despite outshooting the hosts 24-5 Metallurg could not extend that advantage.

In the second period Grigory Shafigulin and Tommi Taimi scored to turn the game around and subsequently Amur withstood a siege. In total Magnitka fired in 60 shots on Alexei Murygin’s net but couldn’t add to that early Lee goal. 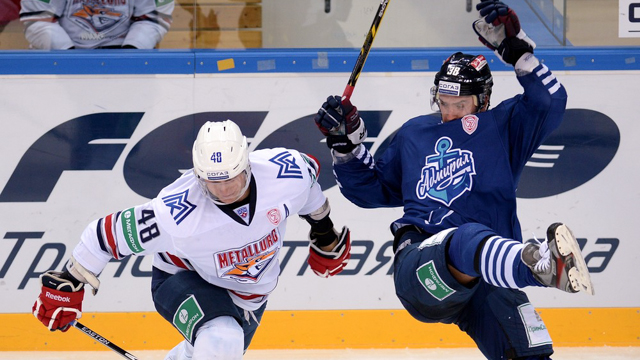 Around the league
Dinamo Riga maintained its reputation as Dynamo Moscow’s bogey team, claiming a 3-1 verdict over its Russian namesake in Latvia. First period goals from Maris Bicevskis and Roberts Bukarts put the home side on top and Linus Videll made it 3-0 after just 10 seconds of the middle session. Alexander Osipov pulled one back for Dynamo, but the Latvians won this fixture for the second time this season.

That result helped Jokerit consolidate its grip on third place in the West with a 2-1 home win over Slovan. Petr Koukal opened the scoring with a well-worked goal midway through the second and Tommi Maki doubled the advantage late in the period. Ladislav Nagy cut the deficit on the power play in the third.

Vityaz maintained its encouraging form with an entertaining 6-3 win at Medvescak. Roman Horak led the scoring with two goals, Mario Kempe had two assists and Robert Kousal and Vyacheslav Solodukhin both produced 1+1.

Sibir made it six wins in a row with a 3-1 success at home to Avtomobilist. Third period goals from Oleg Gubin and Jonas Enlund secured the win after Anatoly Golyshev had put Avto ahead in the second stanza.

Torpedo won the Volga derby against Lokomotiv 2-0. Ivan Kasutin made 21 saves; Vadim Krasnoslobodtsev and Sakari Salminen got the goals.