It took a shoot-out to separate Ak Bars and CSKA for the second time this season, with the Moscow team avenging its home defeat thanks to Roman Lyubimov’s decider following a 2-2 tie in Kazan.

There were several stars missing from both teams due to the Eurotour internationals. The hosts were missing key defenseman Evgeny Medvedev and forward Yury Petrov, who were playing for Russia, while Swedish goalie Anders Nilsson and Finnish forward Janne Pesonen were also away.

CSKA missed leading scorer Alexander Radulov as well as Sergei Andronov, but welcomed back goalie Stanislav Galimov after his run-out for Russia against Sweden on Thursday. 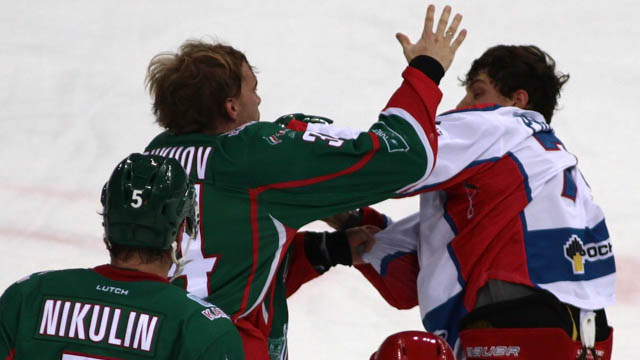 It took some time for the teams to settle, although Nikolai Prokhorkin and Dmitry Obukhov found time for a brief scuffle at the end of the first period. The home side also missed a penalty shot early in the second, Oscar Moller failing to take his chance after he was fouled by Grigory Panin. That meant the game was scoreless until the 36th minute when Vladimir Denisov put Ak Bars in front. That lead could not last until the intermission, though: six seconds before the hooter Simon Hjalmarsson got his first goal in the KHL to tie the game.

Shortly after the interval CSKA went ahead: Justin Azevedo sat out a high-sticking penalty and Jan Mursak took full advantage, adding to his earlier assist on Hjalmarsson’s goal. However the Army Men ran into penalty trouble of their own and Ak Bars converted its third power play of the final session; Azevedo levelled the scores at 2-2 and sent the game to overtime.

Sochi picks up the pace
HC Sochi continued its recent improvement with a 6-3 win at Neftekhimik.

Evgeny Lapenkov led the scoring with two goals – his team’s first and last of the evening – while Andrei Kostitsyn had 1+2 to help Sochi make it four wins from five.

Neftekhimik opened the scoring in the third minute though Dan Sexton, but found itself 3-1 adrift at the first intermission and never got back in contention.

Vityaz are fast becoming the comeback kings in the KHL this season and added another battling victory to its record at Lada. Vyacheslav Solodukhin scored one and assisted on Alexander Kucheryavenko’s game-winner in the last few minutes as Vityaz snatched a 5-4 win. Anton Shenfeld’s goal early in the third had put Lada on the road to a win before that fightback. 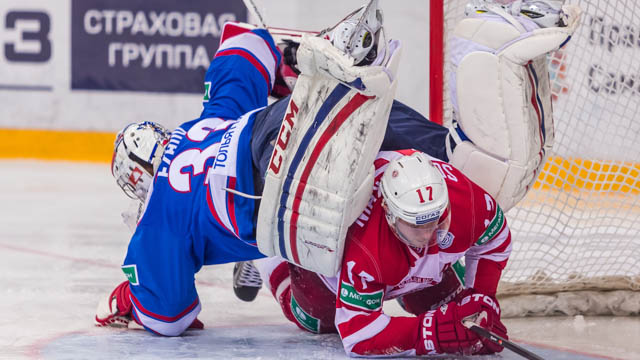 Ugra beat Severstal 3-1 in Khanty-Mansiysk. Ilari Melart put the home team in front and even though Andrei Shefer tied it up for Severstal, goals from Artyom Bulyansky and Ivan Yatsenko led Ugra to victory.

Two goals in the last 10 minutes took Traktor to a 3-2 win over Torpedo. The visitor had been leading 2-1 before Konstantin Panov got to work. He scored twice, both of them off passes from Stanislav Chistov to give the home team the verdict. 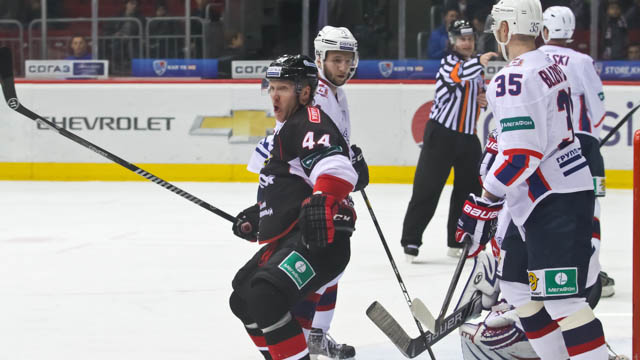