Metallurg Magnitogorsk had to come back from 2-4 down to claim an overtime win against Avtomobilist.

Two goals from Alexei Mikhnov had helped Avto into a strong position by the end of the second period, but Jan Kovar and Danis Zaripov hauled the home team level – Zaripov tying it up on 57:40 to take it to overtime.

Francis Pare got the decider during the extra five minutes, and Metallurg was finally rewarded for outshooting its opponent 53-25 over the course of the game. 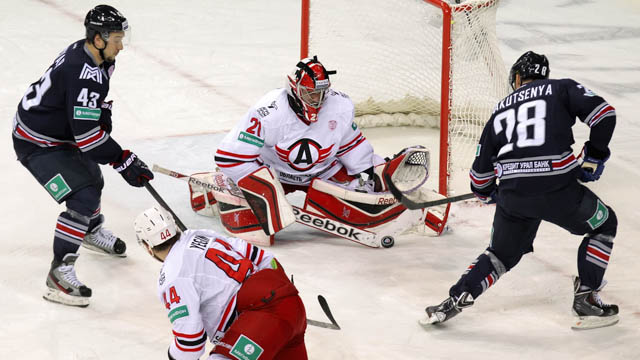 SKA edges HC Sochi
League leader SKA defeated newcomer HC Sochi – but the gap between the teams in the league table was not reflected by the 2-1 scoreline.

SKA’s second-line trio of Viktor Tikhonov (1+1), Evgeny Dadonov (1+1) and Artemy Panarin (0+2) built the platform for SKA’s win in the first period, but after that strong start the league leader ran into difficulties.

Ryan Whitney pulled one back for Sochi – his second goal since arriving in Russia – and young goalie Evgeny Ivannikov was under pressure for much of the latter part of the game. He successfully dealt with 13 goalbound shots in the final session and recorded 29 saves on the night to preserve the win.

Semyon Valuisky profited from a helpful rebound to put Lada ahead in the 12th minute and that lead lasted until Antti Pihlstrom tied it up in the 37th.

The third period was also fairly even until two goals in two minutes saw Yegor Dubrovsky and Dmitry Makarov put Salavat Yulaev in command. Valuisky got his second late on but it was too late to save the game.

All smiles for Jokerit
Jokerit proved too strong for Dynamo Moscow, taking a 3-1 victory thanks largely to a powerful first-period display.

The Finns opened up a 2-0 lead inside 20 minutes with Jani Rita and Niko Kapanen finding the target. Andrei Mironov pulled one back for Dynamo, but there was to be no repeat of the Blue-and-Whites’ heroic fightback against SKA. This time Juhamatti Aaltonen delivered the knock-out blow in the third. 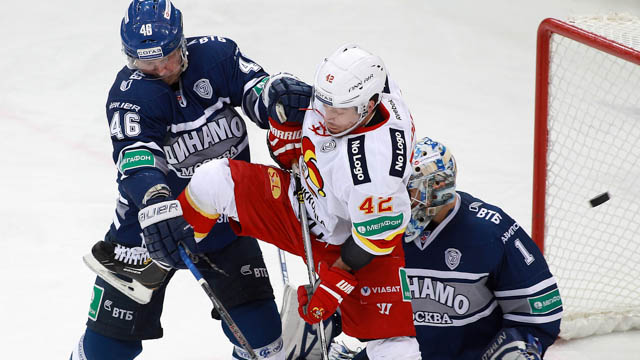 Alexander Burmistrov had two goals and two assists as Ak Bars overwhelmed Ugra. Burmistrov’s contribution led his team to a 6-1 win; Ugra has now lost six of its last eight.

Avangard powered to a 5-1 win over Neftekhimik despite conceding early on to Teemu Eronen. Vladimir Sobotka and Alexander Popov scored twice in a minute to put the hosts ahead before the first intermission and it was plain sailing from there. 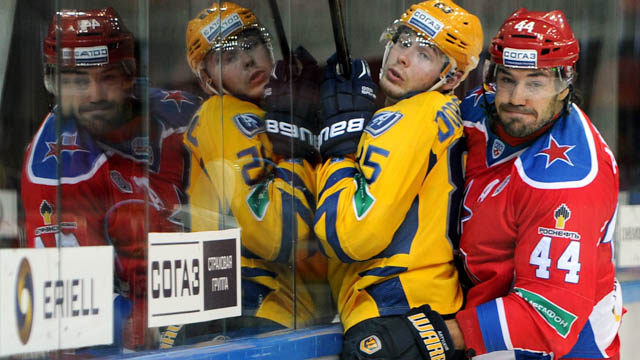 Lokomotiv has gone to a shoot-out in four of its last six games – but practice isn’t making perfect so far. The only win in those four went to Loko’s second-choice goalie Vitaly Kolesnik while Curtis Sanford lost out for the third time after a 1-1 tie at Severstal; Marek Kvapil and Yury Trubachyov got the better of him while opposite number Jakub Stepanek kept Loko at bay.

Dinamo Minsk bounced back from yesterday’s 1-4 defeat to beat Metallurg Novokuznetsk by the same scoreline. Dmitry Maltsev put Metallurg in front, but second-period goals from Alexander Kulakov, Nick Bailen and Sergei Drozd turned the game around.

Playing in Europe seems to suit Amur. The team from Russia’s Chinese border followed up its 3-1 win at Slovan with a 5-2 victory in Zagreb against Medvescak. Goals from Mikhail Zheleznov, Dmitry Lugin, Evgeny Orlov and Michel Miklik put Amur ion control in the first half-hour; Mikhail Fisenko finished it off late in the game.

A dominant first period saw Slovan sink Admiral. Goals from Rok Ticar, Michal Sersen and Ivan Baranka put the Slovaks in complete control on the way to a 4-1 victory.

Two goals from Roman Horak led Vityaz to a 4-2 win over Dinamo Riga – despite a frantic finale. Lauris Darzins pulled the scores back to 3-2 with 84 seconds to play, but Horak’s empty-netter secured the win. 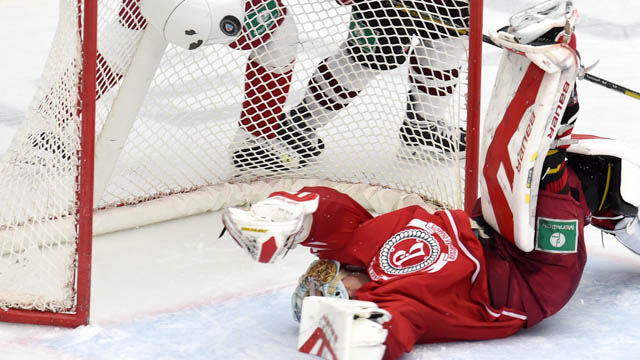