It seemed like a routine evening on the ice as SKA raced into a 2-0 lead through Artemy Panarin and Viktor Tikhonov inside five minutes.

But Vityaz tied it up before the first interval, with former SKA man Alexander Kucheryavenko reminding his former employers what he could.

The second period was almost as tight, and it wasn’t until the third that goals from Roman Cervenka and Maxim Chudinov finally gave SKA some breathing space. Even then, Vyacheslav Solodukhin kept the margin to two goals. 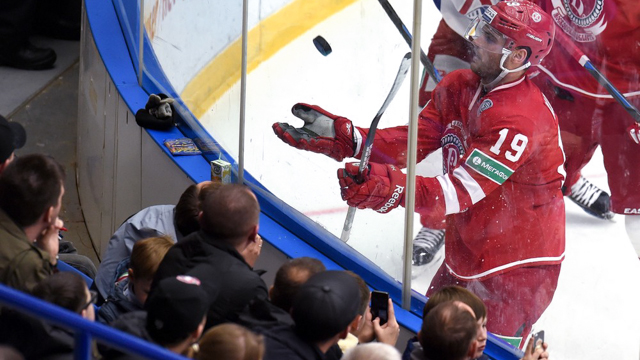 The US D-man’s second-period strike was an unexpected one – he ghosted to the net almost unnoticed to turn in Nikita Shchitov’s shot in a manner more commonly associated with a forward.

Earlier Shchitov’s two goals in the first – the second assisted by Whitney – had put Sochi in control. But there was an anxious finish as Dinamo struck twice late on through Charles Genoway and Linus Videll, only for Ilya Krikunov’s empty-netter to halt the fightback and secure only a second home win of the season for the league newcomer.

Moses double derails Loko
After two games without scoring, Steve Moses was back to his usual form for Jokerit. The American scored twice to lead his team to a 3-1 victory at Lokomotiv.

Moses wasted little time in opening the scoring, placing his wrist shot beyond Curtis Sanford as Topi Jaakola screened the goalie. That converted a second-minute power play, and Loko was under greater pressure three minutes later when Petr Koukal doubled the advantage off another Linus Omark assist.

Moses got his second of the night with a fine solo effort in the 36th minute, a score confirmed by the video referee. Sergei Plotnikov pulled one back on the power play shortly afterwards, but Jokerit held the home team at bay for the final session.

Around the league
Matt Anderson’s equalizer with less than a minute to play took Medvescak to overtime after a 1-1 tie at home to Metallurg Novokuznetsk. And the home team won it in the shoot-out thanks to Mark Katic.

Avangard had little difficulty beating Ugra despite being held for the first period. Alexander Popov and Vladimir Sobotka opened up a 2-0 lead in the second and the hosts cruised to a 4-1 victory.

Dmitry Pestunov, a recent arrival from Dynamo Moscow, got the shoot-out winner for Traktor at Salavat Yulaev. Earlier the forward had an assist on Maxim Kondratyev’s goal in a 2-2 tie. Salavat slipped to a fourth defeat on the spin. 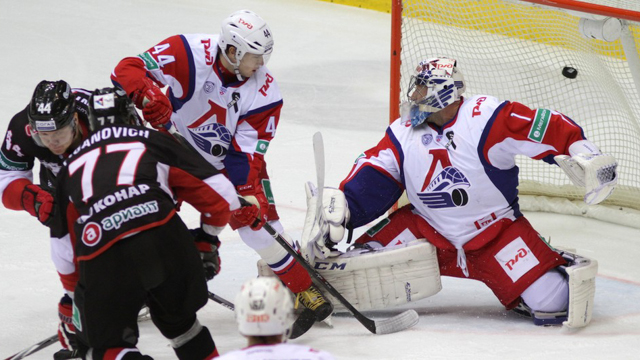 Jakub Kovar also had a shut-out, making 28 saves for Avtomobilist at home to Neftekhimik. Second-period goals from Gilbert Brule, Anton Lazarev and Alexander Rybakov gave the hosts a 3-0 win.

Mike Lundin’s goal in the 45th minute gave Barys a 2-1 win at home to Lada. The Motormen had taken the lead early on through Vitaly Shulakov, but Konstantin Pushkaryov tied it up in the first period.

Artyom Chernov scored with four seconds to play in the middle session to give Atlant a 2-1 win over Amur. Earlier Konstantin Koltsov had opened the scoring before Dmitry Lugin leveled for Amur. 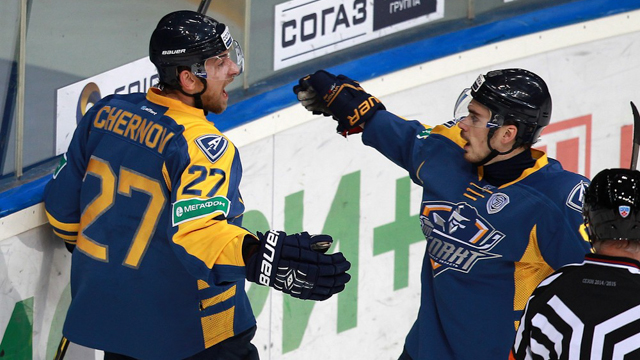