The early stages of this season have been encouraging for CSKA: under Dmitry Kvartalnov’s guidance the Army Men have gelled quickly and formed a potent force in the Western Conference, trailing only their military cousins from St. Petersburg in the race for the summit.

And that’s put a real feel-good factor back around the oft-beleaguered club, steadily winning back the fans who drifted away after the departure of Vyacheslav Bykov saw the team steadily lose its competitive edge and fall into the ranks of play-off hopefuls rather than title contenders.

So when defending champion Metallurg Magnitogorsk came to Moscow it was a full house on Leningradsky Prospekt – and hopes were high for another thriller to match the pulsating battles against SKA and Ak Bars in recent weeks. 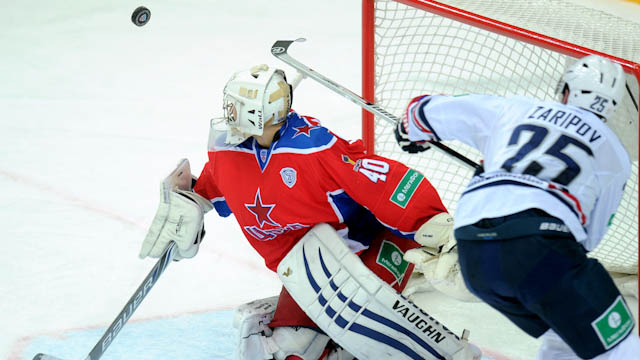 Those earlier heavyweight clashes had ended in narrow defeats for CSKA, and the home fans were given hope of a better outcome this time when the first power play of the night saw Jan Mursak fire the Army Men ahead. Magnitka’s penalty killing has been impressive this season, but when Alexander Radulov thundered a shot in Vasily Koshechkin’s pads the rebound evaded a crowd of players on the slot and fell for the Slovenian international to lazer the puck into the exposed corner of the goal.

But Metallurg didn’t win the Gagarin Cup last season by accident, and even without its absent captain Sergei Mozyakin, this is a side with some serious offense. It fell to Danis Zaripov to tie it up – his 149th regular season goal in the KHL, and one to treasure. Feinting to pass to Jan Kovar in front of the net, Zaripov deceived everyone and squeezed his shot inside the near post from a seemingly impossible angle.

The third period saw Magnitka inch ahead: Evgeny Timkin made it 2-1 in the 44th minute, thanks to a brilliant assist from Chris Lee. The defenseman fired the puck from blue line to blue line, giving Timkin a clear run on Stanislav Galimov’s net, and the forward put it on the top shelf to give the goalie no chance.

CSKA battled hard for an equalizer, but could not force the game into overtime. Not for the first time this season, though, the Army Men proved that this team is capable of giving anyone in the league a game. Meanwhile Magnitka returns to the top of the Eastern Conference, jumping ahead of Ak Bars.