Alexander Radulov notched a ‘Gordie Howe Hat trick’ to inspire CSKA to a 2-1 win over Avtomobilist.

The visitor was leading thanks to Alexander Bumagin’s first-period penalty shot when Radulov got to work. First he supplied an assist on Bogdan Kiselevich’s equalizer, than he got to the slot himself to score with a back-hander off Jan Mursak’s pass.

Finally in the third he got into a fight with Andrei Antonov to complete a busy evening. 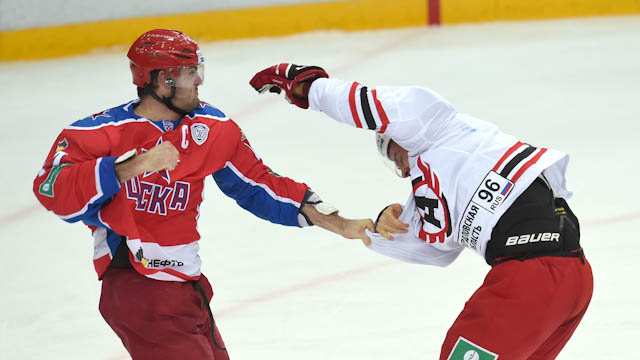 SKA stomps Salavat Yulaev
There’s no sign of the SKA bandwagon slowing down in St. Petersburg, and Vyacheslav Bykov enjoyed a crushing 7-2 victory against his former club.

Although Salavat Yulaev has been going well in the Eastern Conference it had no answer to a powerful offensive display from the hosts.

SKA had seven different goal-scorers, with top striker Ilya Kovalchuk unusually failing to add to his goal tally. The star did have two assists though, while Artemy Panarin put up a hat-trick of passes on the night.

The Army Men found the net consistently throughout the evening, with Jimmie Ericsson and Tony Martensson opening up a 2-0 lead by the first intermission.

The middle session saw the teams trade two goals apiece but SKA cruised to victory in the third thanks to efforts from Evgeny Dadonov, Viktor Tikhonov and man-of-the-match Patrick Thoresen.

Dynamo recovers to down Sibir
Alexei Tereshchenko led the way as Dynamo Moscow recovered from a bad start to win 5-3 at Sibir.

The home team scored twice in 20 seconds in the first period, putting the pressure firmly on Dynamo. After a time-out Tereshchenko got his first of the evening, but Renat Mamashev reinstated the two-goal lead early in the second.

But after that it was all Dynamo. Denis Kokarev pulled one back and Andrei Mironov tied it up in short order, prompting a Sibir time-out. The pause, however, helped Tereshchenko once again – he was the next scorer to give the Blue-and-Whites the lead for the first time.

Kaspars Daugavins finished it off with an empty-netter to take the points back to Moscow.

Two days after leading Ak Bars to victory at CSKA, Janne Pesonen did it again with a late goal to snatch a 2-1 win at Severstal. All the scoring came in the third: Artyom Lukoyanov put Ak Bars in front before Nikolai Stasenko briefly brought the Steelmen level.

Danis Zaripov’s wait for his 150th KHL goal continues after Metallurg Magnitogorsk lost in a shoot-out at Torpedo. Oskar Osala put the visitor ahead but Vyacheslav Kulyomin tied it up and Nikita Filatov got the winner.

Ryan Stoa got the only goal as Metallurg Novokuznetsk edged HC Sochi 1-0. Rafael Khakimov had 39 saves for his shut-out.

Third period goals from Mikhail Yakubov and Maxim Afinogenov saw Vityaz claw back a 1-3 deficit before beating Amur in a shoot-out. Nikita Vyglazov got the decider.

Ilya Zubov separated Admiral and Lokomotiv in a shoot-out following a 1-1 tie in Vladivostok. Andrei Sigaryov put Admiral ahead before Daniil Apalkov tied it up.

Denis Parshin scored a penalty shot with three seconds remaining, but Avangard still lost at Dinamo Riga. Parshin tied the game at 2-2 after Dinamo had led 2-0, but Mikelis Redlihs gave the home side the verdict in the shoot-out. 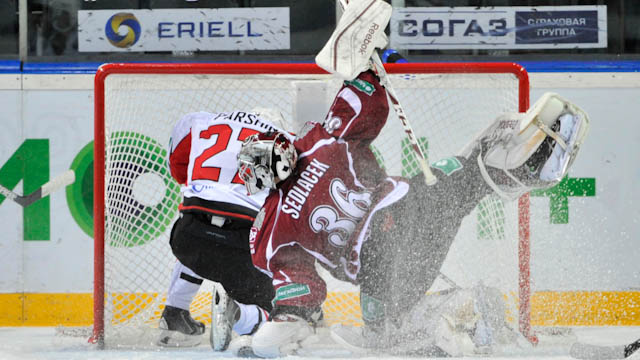