Ak Bars battled back from 0-2 down to win in a shoot-out at CSKA. Three saves from Anders Nilsson denied CSKA in its first sequence of penalty shots this season, while Janne Pesonenfollowed up his late equalizer with the decisive blow.

Earlier it had all seemed so straightforward for the home team. After a goalless first period the game kicked into life in the second. Stephane da Costa converted two power plays for the Army Men and Ak Bars was struggling to stay in the game.

But a freakish goal in the 47th minute shifted the momentum of the evening: Dmitry Obukhov was credited with the marker after his shot from the blue line deflected off a team mate’s back and looped over Stanislav Galimov and into the net.

Nilsson denied Alexander Radulov in a one-on-one breakaway that would have settled matters for CSKA, and Ak Bars hauled themselves level on 57:15 when Pesonen tipped home a Evgeny Medvedev slap shot on the power play to take the game to overtime. 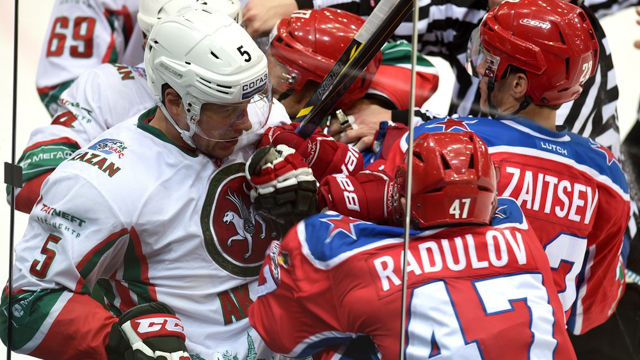 SKA withstands Barys rally
SKA stretched its lead at the top of the table thanks to a 5-3 win at home to Barys.

The home team was surprised by Roman Savchenko’s opener, but rallied strongly to open up a 4-1 lead. Anton Belov tied it up before the first intermission and three goals in 10 minutes saw Jimmie Ericsson, Patrick Thoresen and Alexander Barabanov put SKA in control by the midway mark.

Barys wasn’t done yet, though. Mikhail Rakhmanov and Roman Starchenko made it 4-3 before the end of the second, setting the stage for an exciting final stanza.

And the visitor went all out for an equalizer in the final session, peppering Alexander Salak with 21 shots but failing to find a way past the Czech goalie before Ilya Kovalchuk found the empty net to wrap up the points.

Amur wins at last
Amur ended its long losing streak with a shoot-out success at home to Lokomotiv.

Dmitry Lugin was the star man, getting the post-game winner after scoring twice in a 4-4 tie as Amur won for the first time in 12 attempts.

Amur had led three times during the game, but goals from Martin Thornberg (2) and Geoff Platt kept Loko on track.

And when Sergei Plotnikov put the visitor ahead for the first time in the 49th minute it seemed that Amur might have missed its chance. However Lugin tied it up, and went on to score the only goal of the shoot-out to bring the taste of victory back to Khabarovsk.

Around the league
Jokerit went down to a 2-1 defeat at home to Avangard. Denis Parshin got the winner on the power play late in the second after Topi Jaakola cancelled out Alexander Perezhogin’s opener.

There was no birthday bonus for Mike Keenan as his Metallurg Magnitogorsk team lost out in a shoot-out at Severstal. Without leading scorer Sergei Mozyakin Magnitka went in front through Mikhail Yunkov, but Nikolai Kazakovtsev tied it up. Dmitry Kagarlitsky got the winner.

Admiral edged Vityaz 5-4 in a thriller in Vladivostok. Enver Lisin was the key player, scoring twice including the game winner. Roman Horak extended his scoring streak to four games for Vityaz, but his team lost out after a three-game winning run.

HC Sochi took an overtime win from its trip to Sibir after a 1-1 tie in regulation. Andre Petersson put the visitor ahead in the first period but Dmitry Kugryshev tied it up with 10 minutes to play. Nikita Shchitov got the decider on 63.44. 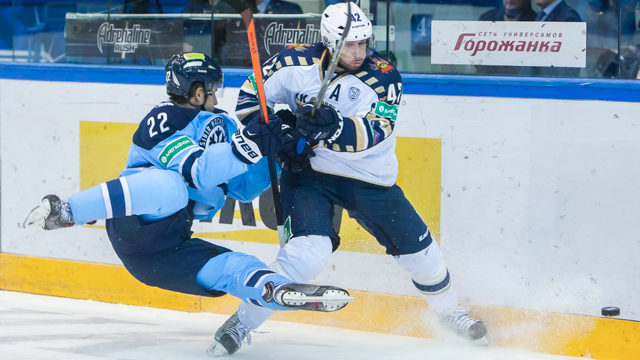 Metallurg Novokuznetsk shrugged off a Dynamo Moscow fightback to win in a shoot-out after a 2-2 tie. Alexander Komaristy and Vadim Mitryakov put the home team in front, only for Andrei Mironov and Maxim Pestushko to tie it up. But Komaristy delivered the coup de grace in the shoot-out to keep Kuznya in the play-off places.

Petteri Nokelainen scored twice as Torpedo’s Finnish forwards lifted the team to a 3-2 victory over Avtomobilist. Jarkko Immonen was the other Torpedo scorer.