Eastern conference high flyer Avangard was the latest team to fall to SKA – and once again the Petersburg team proved its fighting qualities in a tense clash.

Twice Avangard led, and twice SKA tied it up before Artemy Panarin snatched an overtime winner, picking up Maxim Chudinov’s backhand pass and firing through Konstantin Barulin’s five-hold from a tight angle.

That was harsh on Barulin, who had withstood intense pressure earlier in the game, while Avangard may feel it should have turned its earlier advantage into a win. Evgeny Kulik put the Omsk men in front just after halfway, only for Chudinov to help set up Patrick Thoresen for the equalizer.

Then the teams traded power play goals in the third, with Alexander Popov putting Avangard ahead for just two minutes before Jimmie Ericsson took the game to overtime. 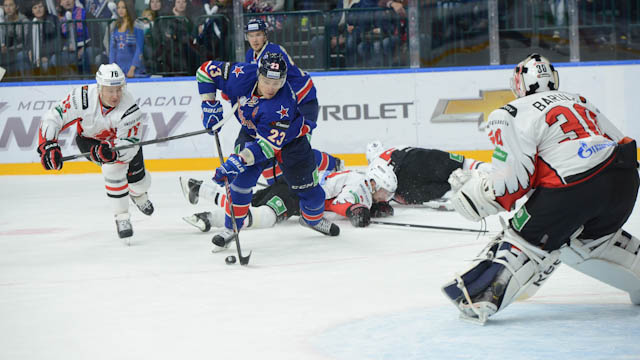 The home side’s impressive recent form counted for nothing in a game where a combination of clinical Salavat finishing and too many unforced errors from the Finns decided the outcome.

In an even opening stanza the men from Ufa made the most of their chances and opened up a 2-0 lead through another Finn, Antti Pihlstrom and a stalwart Russian, Ivan Vishnevsky.

Linus Omark’s solo effort reduced the arrears soon after the restart, but Heikkinen scored two in three minutes to take the game out of Jokerit’s reach.

Third period saw Leland Irving put through his paces by his former Jokerit team-mates, but he held firm and allowed just one goal – to the irrepressible Steve Moses – as Salavat withstood a late rally.

Torpedo battles back
Torpedo rebounded from a two-game losing streak to beat Ak Bars 3-2 – and sent the Kazan team to a second successive loss.

The visitors led twice, through Ilya Nikulin and Fyodor Malykhin, but Torpedo pegged them back both times thanks to Juuso Hietanen and Vyacheslav Kulyomin.

Then with five minutes to play Ak Bars was penalized for too many men on the ice and Sakari Salminen took advantage, spotting a path to goal and firing low across the face of Emil Garipov to win it for Torpedo. 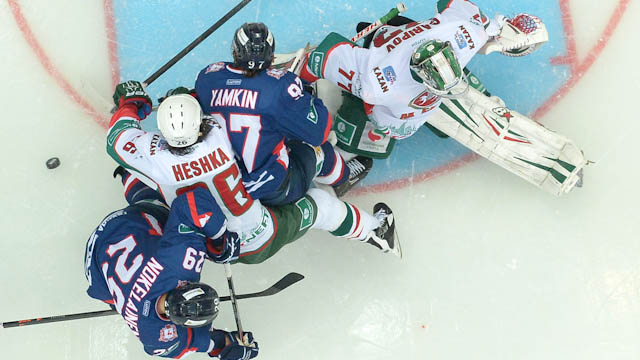 Birthday boy Maxim Karpov scored for the third game in succession to lift Dynamo Moscow to a 3-2 win at Amur. That was the Khabarovsk team’s 11th defeat in a row, despite leading twice before Karpov’s game-winner.

Vityaz made it three wins in a row, and Maxim Afinogenov and Roman Horak both scored for the third game running as the Podolsk team edged a 3-2 verdict at Sibir. The home team went 2-0 up in the first period, but couldn’t hold on to its advantage.

There was a new man behind the bench for Severstal – but his team still had a sense of déjà vu after Marek Kvapil followed up his shoot-out winner at Torpedo with another one at home to Avtomobilist. And, just like in Nizhny Novgorod during the week, the teams played out a 2-2 tie in Igor Petrov’s return to the Cherepovets hot seat.

Two goals from Brandon Bochenski led Barys to a 3-2 win at Dinamo Riga. The outcome was more or less decided in the first period when Bochenski and Roman Starchenko put the visitor into a 2-0 lead, although Marcel Hossa’s late goal gave Dinamo hope of a recovery.

Goals were even harder to come by in Vladivostok as Admiral and HC Sochi played out 65 minutes without scoring. Richard Gynge finally won it for the home team in a shoot-out. Ivan Nalimov made 26 saves for Admiral, Tomas Popperle had 35 stops for Sochi. 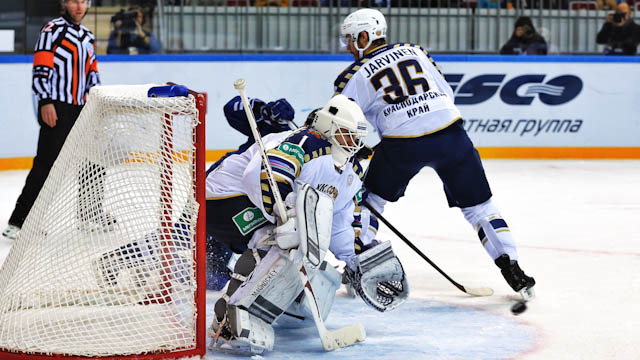