One week after CSKA beat HC Sochi 6-2 in Moscow the teams met beside the Black Sea – and produced the exact same scoreline.

Two first-period goals from Alexander Radulov set the tone this time, and three assists from Stephane da Costa means the Frenchman is keeping pace with his team-mate on 26 points for the season, one behind the league’s top scorer Ilya Kovalchuk.

Igor Ignatushkin reduced the deficit to 2-1 with the only goal of the second period, but CSKA romped away in the third. Nikita Zaitsev got a power play goal in the first minute and Igor Volkov quickly stretched the lead to 4-1. Jan Mursak’s penalty shot and a Radulov - da Costa combination to set up Igor Grigorenko completed CSKA’s scoring; former Army Man Oleg Saprykin got a last minute consolation for Sochi. 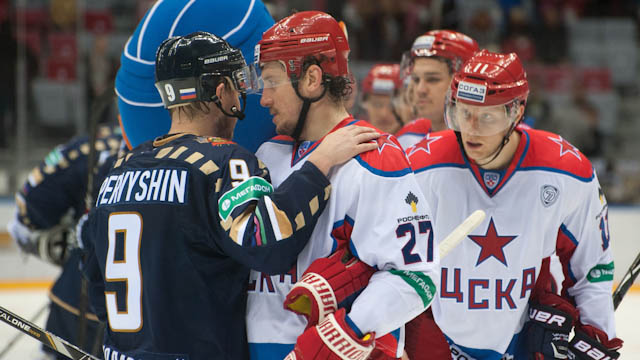 A tale of two goalies
At one end of the ice Vitaly Koval made 29 saves and claimed his third shut-out of the season for Salavat Yulaev. At the other, Rafael Khakimov saved two penalty shots for Metallurg Novokuznetsk.

However it was Koval who got the win, thanks largely to two goals midway through the first period. Dmitry Makarov got things moving in the 11th minute then Ilkka Heikkinen doubled the lead on the power play in the 13th – a penalty called against Khakimov.

The goalie made amends with his first penalty save, denying Kirill Koltsov before the first intermission and the second session was scoreless.

In the third Ivan Vishnevsky converted another power play, but there was still time for Khakimov to stop another penalty shot, this time from Denis Khlystov.

Avangard overhauled
Avangard went down to its third defeat in four games and handed top spot in the Chernyshev division to Salavat Yulaev.

Sibir was the latest team to win in Omsk, taking a 3-1 verdict thanks to two goals from Viktor Bobrov either side of Patrick Hersley’s effort early in the third.

Vladimir Sobotka got Avangard’s consolation but the return of leading scoring Sergei Shirokov from injury can’t come quickly enough for the Hawks of Siberia.

Severstal conceded five for the second time in two days as Martin Thornberg and Yegor Averin both scored twice in Lokomotiv’s 5-3 win. Pavel Chernov got two in a losing cause for Severstal. 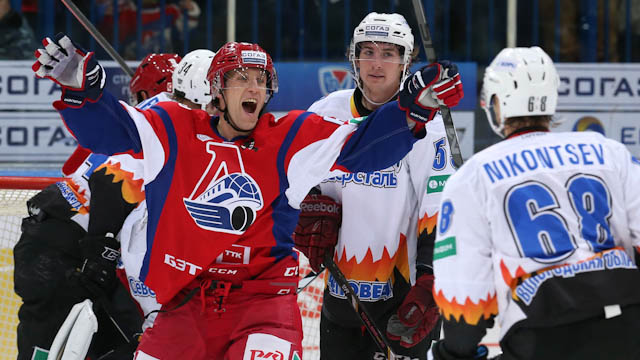 Nigel Dawes scored two as Barys eased to a 5-0 win over struggling Amur. Dustin Boyd finished with 1+1 and there were 0+2 contributions from Brandon Bochenski and Kevin Dallman.

Igor Radulov got Atlant’s shoot-out winner at Dinamo Minsk. Earlier he scored the equalizer in a 2-2 tie.

Maxim Afinogenov struck with just six seconds left to complete a 3-2 win for Vityaz at home to Torpedo. The visitors had led 2-0, but that lead was overturned in the last 11 minutes of the game. 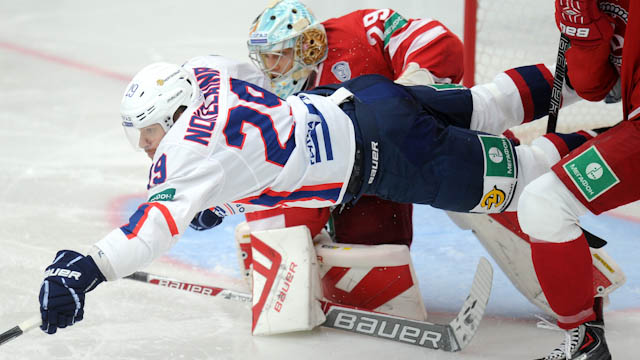