Metallurg Magnitogorsk hammered Traktor 6-1 to romp to success in the South Ural derby – and established several landmarks along the way.

Danis Zaripov was at the heart of two: he made his 900th appearance at the top level of Russian hockey and celebrated with 1+3. His 14th-minute assist on Viktor Antipin’s opener, coming on a 5v3 power play, was his 200th in the KHL. Before the hooter he scored off a Sergei Mozyakin pass and returned the favor early in the second for Magnitka’s captain to score on another power play.

Zaripov had a further assist on Chris Lee’s goal and Evgeny Timkin wrapped up the home scoring, but there was still time for Deron Quint to get a late consolation goal – and bring up his 100th KHL point in his third season in the competition. 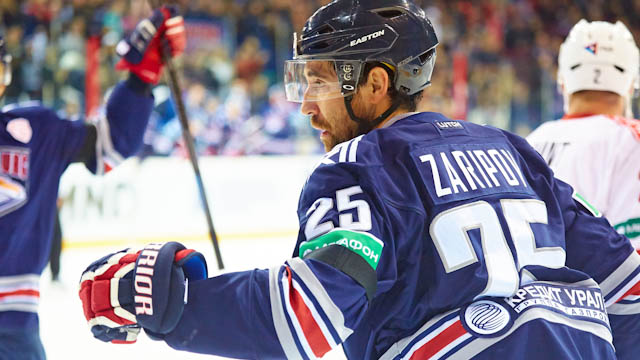 SKA grabs tight win over Riga
High-flying SKA was given a tough test at home to lowly Dinamo Riga before eventually edging a 2-1 verdict.

Artemy Panarin opened the scoring midway through the game, firing home the rebound off one of his own shots to finally wear down Dinamo Riga’s resistance. His second shot, however, rebounded directly off the back of the net, deceiving the officials until a look at the video confirmed that he had indeed beaten Edgars Maskalskis.

But Dinamo, for all its troubles this season, refused to roll over. Chances were at a premium throughout, and Maskalskis stopped the best of them when he denied Viktor Tikhonov’s penalty shot early in the third.

Andris Dzerins tied it up with less than 10 to play, deflecting a Lauris Darzins shot past Evgeny Ivannikov. It took the video official longer to reach a verdict on this before contenting himself that Dzerins had not used his hand to push the puck into the net.

Seconds after that SKA had a great chance to go back ahead when Evgeny Dadonov was awarded another penalty shot. But the former Donbass man’s attempt to deke Maskalskis was abruptly cut short by the goalie’s pad.

However, Maskalskis had no answer in the 57th minute as a pacy SKA attack set him sliding across the crease and Dinar Khafilzullin beat him stick-side to claim the game-winner.

Ak Bars gave up a 3-0 lead before Mikhail Varnakov got his second of the night to sink Admiral 4-3. Ushenin twins, Vladislav and Vyacheslav, both scored in Admiral’s fightback after the home team had raced ahead in just 21 minutes, but Varnakov grabbed a sensational short-handed goal with just two seconds left.

Avtomobilist goalie Jakub Kovar made 32 saves for his first shut-out of the season. At the other end Filipp Metlyuk beat Ugra’s Stepan Goryachevshikh at the second attempt to secure a 1-0 win. 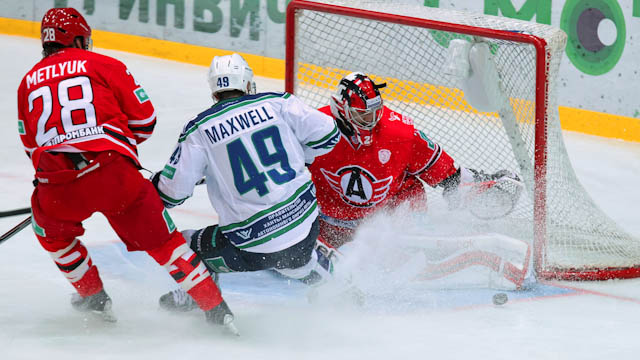