Konstantin Gorovikov marked his 900th game in the Russian championship with a hat-trick of assists to help Dynamo Moscow to a comfortable win over one of his former clubs, Severstal.

Barely a handful of those games have been played on the same line as Kaspars Daugavins, but the 37-year-old showed his trademark understanding of what his team-mates are doing as the pair exchanged slick passes around the slot before the Latvian put Dynamo ahead.

Within 13 seconds the lead was doubled thanks to a smart one-timer from Maxim Karpov that left Roman Smiryagin bamboozled.

Karpov hit the bar soon after and Severstal was under pressure for much of the first session, despite a breakaway goal from young D-man Zakhar Arzamastsev.

The second period quickly extinguished any hopes of Severstal revival, though. Alexei Tsvetkov converted a penalty shot early on, then Gorovikov got back among the points once more with assists on goals for Maxim Pestushko and Mat Robinson. That took the double world champion to 191 points in KHL games, closing in on another landmark.

Not even a 5v3 power play for 99 seconds could help Severstal get back into the game, and Dynamo had little difficulty in closing out a 5-1 win. 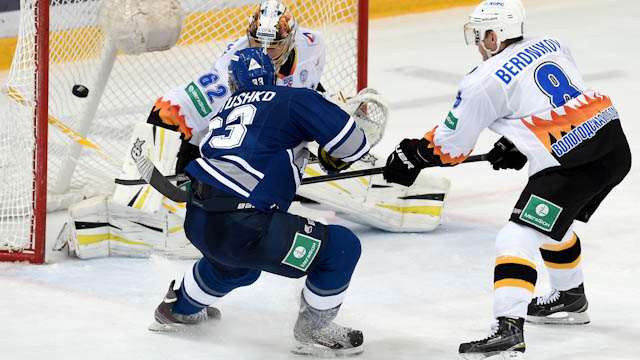 Sibir stops Salavat Yulaev
Salavat Yulaev saw its six-game winning streak grind to a halt in the face of a powerful final-period fight back from Sibir.

The home crowd had every reason to be confident as the in-form hosts opened up a 2-0 lead in the closing minutes of the second period. Power play goals from Alexei Kaigorodov and Ivan Vishnevsky seemed to have the Ufa team well on the way to victory number seven of its current streak – but Sibir had other ideas.

Dmitry Kugryshev pulled one back early in the third, and then two goals in barely two minutes turned the game upside down. Maxim Ignatovich tied it up and Jarno Koskiranta got the winner, ending a two-game losing streak for the Siberians. 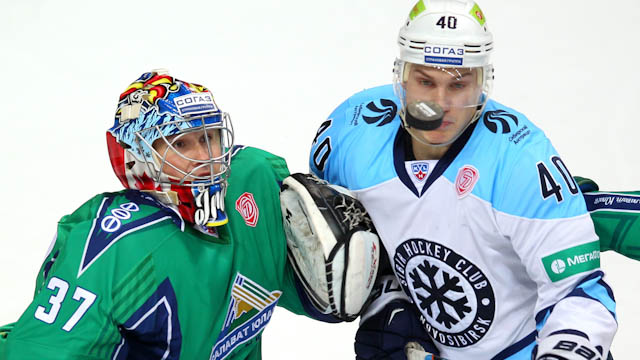 Avangard too good for Amur
Avangard was without injured top scorer Sergei Shirokov but still had little trouble downing Amur 4-1.

Denis Parshin continued his own impressive form to post 1+2 and pace his team’s scoring, starting the count in the first period when he set up Alexander Popov for the opener.

He also had a hand in Vladimir Sobotka’s goal early in the second, but Amur hit back through Michel Miklik a couple of minutes later. Sergei Kalinin quickly reinstated that two-goal lead and Parshin wrapped up the scoring himself in the 51th minute, assisted by Popov and Sobotka.

Johan Harju’s first goal of the season crowned a fine individual performance and helped Jokerit to a 4-2 win at Slovan. Harju also got an assist on Jani Rita’s goal as the Finns triumphed in Bratislava.

Atlant enjoyed a comfortable victory at home to Medvescak in the battle of the Western Conference strugglers. Andreas Engqvist, Matt Gilroy and Maxim Potapov took the score out to 3-0 inside 25 minutes and the Moscow Region team eased to a 5-2 win. 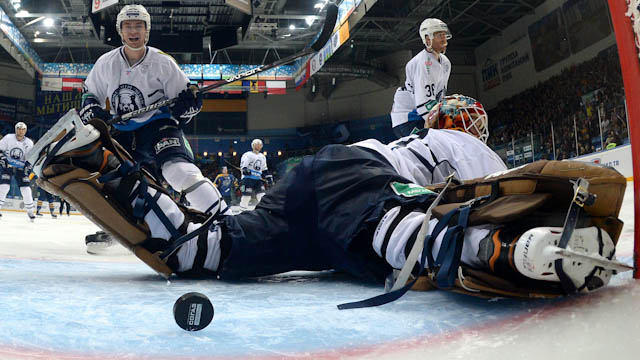 Nikita Dvurechensky isn’t the most prolific forward in the KHL, but after getting his first goal since January 7 he followed it up with a second inside 15 minutes as Torpedo tied 3-3 at Lokomotiv. The verdict went Torpedo’s way thanks to Jarkko Imonen in the shoot-out.

Metallurg Novokuznetsk claimed a shoot-out win after a 4-4 tie at Barys. Alexander Komaristy settled a roller-coaster clash in Astana.