SKA on top in clash of styles. October 10 round-up

The game between SKA and Jokerit represented a battle between two rival schools of hockey, with the Finns under Erkka Westerlund playing a typically cagey game and Vyacheslav Butusov looking to his powerful offense to undermine that.

It’s a Russia-Finland clash that we’ve seen at the highest level of international hockey on many occasions, and at club level it gained extra spice from the impressive starts both teams had made to the season.

But in the end adventure out-ranked caution in St. Petersburg. Jokerit’s careful, precise game held SKA at bay until the 27th minute but finally Ilya Kovalchuk found a chink in the Finns’ pressing tactics and produced two goals to separate the teams. Kovi was to have a hand in all four goals, claiming an assist Viktor Tikhonov added a third in the final session and repeating the trick as Artemy Panarin wrapped it up late on.

Jokerit’s Steve Moses got a consolation for the visitors, who contributed fully to an entertaining game, but SKA took a 4-1 victory and Kovalchuk took the day’s plaudits. 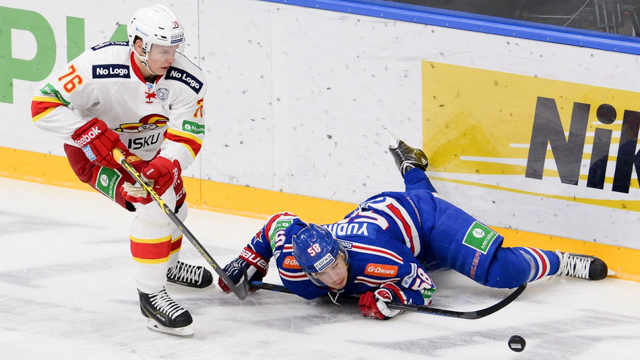 Metallurg maintains its curse over Avangard
Metallurg Novokuznetsk got its third win of the season over Avangard, and claimed its second shut-out in Omsk.

Rafael Khakimov’s 37 saves blunted the home offense and steered his team to a 2-0 victory, claiming his first KHL shut-out. He was busiest in the second period when Avangard fired in 20 shots on goal and allowed just three at the other end, but enjoyed an easier time in the third, partly due to Sergei Shirokov, the league’s top goalscorer, leaving the game through injury.

Avangard’s play, orchestrated by assistant coach Eduard Zankovets in the absence of Raino Summanen, didn’t excite the home crowd, though. They felt that for all their team’s pressure, poor decision making around Khakimov’s net meant that few of those shots carried any real menance.

At the other end, with few opportunities, Kuznya showed how it should be done: Sergei Sentyurin and Mikhail Plotnikov scored in the first and the last to give Metallurg the points.

Barys’ Fab Five
Every player in the first line for Barys scored as the Kazakhs beat Sibir 6-3 in Astana. After Dmitry Upper set things rolling with an early penalty shot, there was a goal for each of the forward – Brandon Bochenski, Nigel Dawes and Dustin Boyd, and both defensemen, Mike Lundin and Kevin Dallman.

Boyd and Bochenski led the team’s scoring, each posting 1+3 as Barys roared into a 5-0 lead inside 28 minutes.

Around the league
Salavat Yulaev made it six wins on the spin with a 7-2 thrashing of Amur, but it wasn’t until the second half of the game that the home side took control. Denis Khlystov put Salavat 3-2 up in the 31st minute and Amur’s resistance faded after that. 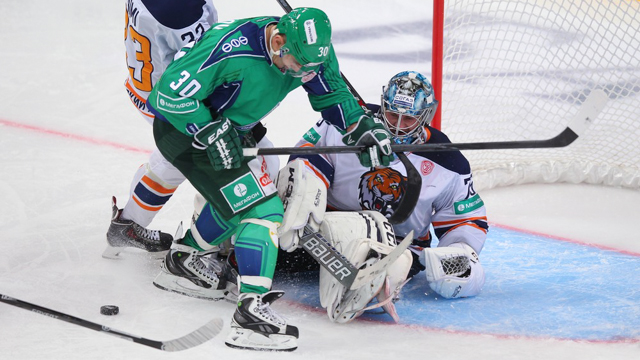 Dinamo Minsk overpowered Slovan to win 4-1 in Belarus. The key action came in the second with goals from Oleg Goroshko, Charles Linglet and Alexei Kalyuzhny putting Dinamo in complete control.

Lauris Darzins scored 2+1 – including a short-handed goal – as Dinamo Riga edged Medvescak 4-3. Darzins got the winner with just 144 seconds left to play.