A moment of opportunism from Dmitry Pestunov snatched a narrow victory for Dynamo Moscow at home to Lokomotiv, avenging last week’s defeat from the same opponent.

The decisive goal, Pestunov’s first of the season, came with little over six minutes to play. The forward pounced on a loose puck in the Loko end and while Ilya Lyubushkin was caught between going to the puck and cutting out a dangerous pass to Denis Mosalyov the forward rushed to the net and forced the puck past Curtis Sanford from close range.

That wasn’t quite the end of Loko’s hopes – with just under four minutes to play the Yaroslavl team got a power play. Jiri Novotny thumped a slap-shot against the crossbar and Geoff Platt fired millimeters wide off the target but Dynamo held on and went on to add a second through Kaspars Daugavins’ empty-netter.

Goalie Alexander Sharychenkov made 23 saves for his shut-out, earning the man-of-the-game award for his efforts

Earlier Dynamo had Maxim Solovyov to thank for two key challenges in the first period to keep the game goalless. The first, admittedly, saw him sin-binned for hooking back Vladislav Kartayev as the young forward made a searing charge to the net – a textbook definition of a goal-saving foul. Then later in the period he returned to the game to make a vital intervention to stop Emil Galimov as the puck bounced back into the slot.

It was an individual performance typical of the game as a whole; both teams produced attentive hockey, cancelling each other out for long periods. Even the penalty count stayed low as these two old rivals warily circled one another waiting for a chance to land a telling blow. 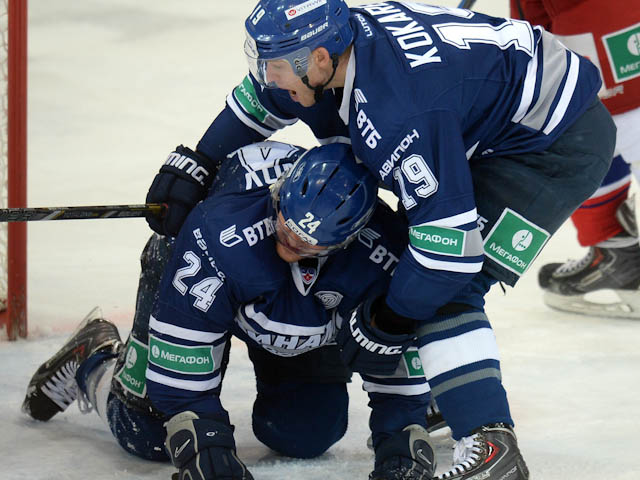 Sochi sinks Vityaz
Bottom club HC Sochi picked up a 4-2 win at Vityaz. Andre Petersson led the way with two goals as the Black Sea team opened up a 3-0 lead inside 25 minutes, helped by Maxim Afinogenov missing a penalty shot.

But Vityaz battled back to 2-3 thanks to Mario Kempe and a successful penalty shot from Dmitry Shitikov, only to see Cory Emmerton give Sochi breathing space early in the third.

The victory wasn’t enough to move Sochi up the Western Conference table but the team now has a healthier points tally than Avtomobilist and Amur in the East. 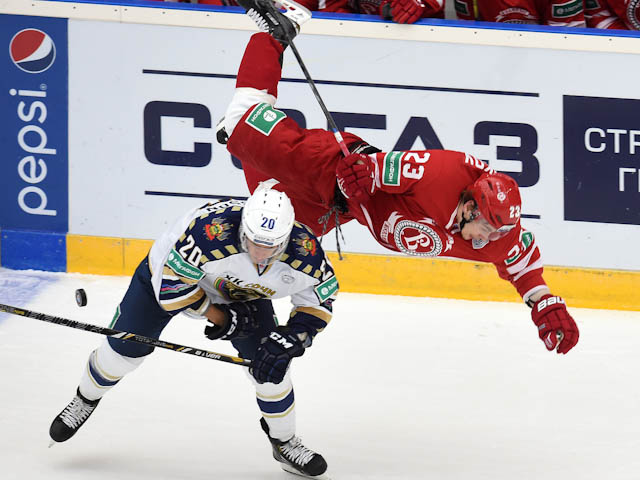