Alexander Radulov overtook Ilya Kovalchuk at the top of the point-scoring charts after two goals in Vladivostok lifted him to 8+14=22 points for the season.

Radulov’s hot streak stretches to seven games after leading CSKA to a crushing 5-0 win at Admiral, a score that also sees Moscow’s Army Men draw level with their Petersburg comrades SKA. Both teams have 36 points from a possible 39.

Radulov broke the deadlock on the power play in the first minute of the second period and from then on there was little doubt over the outcome. Stephane da Costa quickly extended the lead before Radulov and Jan Mursak took the game away from the host. 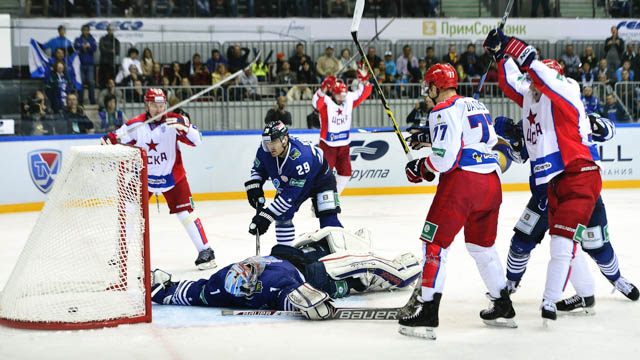 Mozyakin wins it for Magnitka
Defending champion Metallurg Magnitogorsk had Sergei Mozyakin to thank once again after his goal earned a slender 2-1 win at Ugra.

All the scoring came early on, with Danil Romantsev putting the home team ahead in the fourth minute, only for Mikhail Yunkov to tie it up in the 10th.

Moyzakin got the winner 90 seconds later with a typically predatory finish from the slot off a Jan Kovar pass.

Avangard quells Neftekhimik fightback
Avangard’s smooth progress to victory at Neftekhimik was rudely interrupted by two goals in a minute midway through the third period – but the Omsk team recovered to clinch a 4-3 verdict.

It all looked so comfortable for Raimo Summanen’s men after goals from Evgeny Mozer and Denis Parshin made it 3-1 early in the final session.

But the home side hit back through Dmitry Kosmachyov and Yegor Milovzorov who scored just 42 seconds apart to bring the scores level.

That set the stage for Mozer to fire a shot into Ville Kolpanen’s pads and Sergei Kalinin reacted fastest to grab the winner with just over five to play.

Salavat Yulaev goalie Vitaly Koval was just six minutes away from his third shut-out in a row, but had to be content with an overtime win at Traktor. For much of the game it looked like Antti Pihlstrom’s early goal would be enough for Salavat but Maxim Kondratiev set up Vyacheslav Osnovin to end Koval’s unbeaten run after almost 180 minutes. Teemu Hartikainen won it for the visitor in overtime. 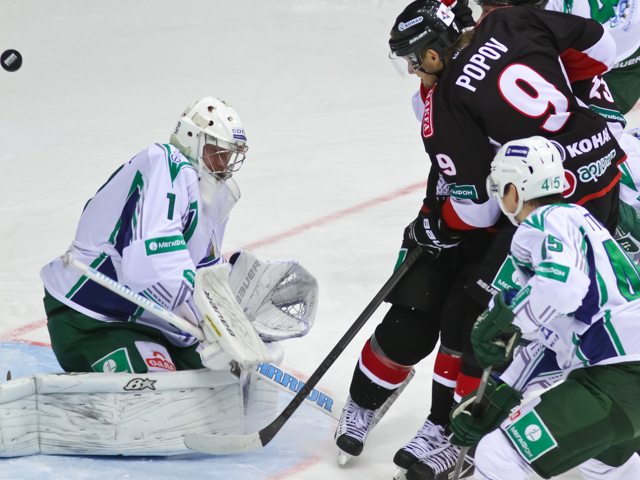 Two days after a thumping 7-2 win at Amur Torpedo was among the goals again with a 6-1 success against Metallurg Novokuznetsk. There was a strong Finnish accent to the scoring with Jarkko Immonen, Sakari Salminen and Jusso Heitanen all finding the net.

There were other impressive Finns on display in Novosibirsk, but a very different scoreline. Forty two saves from Mikko Koskinen and a solitary goal from Jarno Koskiranta earned Sibir a 1-0 win over Severstal.

It took a shoot-out to separate Lada and Barys after a 1-1 tie in Togliatti. Andrei Nikitenko settled it in the home team’s favor, making it two wins in a row for the Motormen.