Two days after winning 5-1 in Zagreb, SKA proved it was no fluke by downing the Croats 5-0 and stretching its unbeaten start to 12 games.

The damage was done early on with Artemy Panarin scoring twice in the first 10 minutes to dampen Medvescak’s spirits.

Second period goals from Patrick Thoresen and Andrei Kuteikin stretched that lead, but the middle session ended on an ugly note as Ilya Kovalchuk and Mike Glumac came to blows in center ice. Kovi took exception to Glumac’s check from behind on Kuteikin; the officials expelled the Canadian from the game.

Vadim Shipachyov completed the scoring in the final session; Alexander Salak claimed SKA’s first shut-out of the season with 22 saves.

Aaltonen stretches streak to 12 games
SKA isn’t the only club counting 12 games of success. Jokerit’s Juhamatti Aaltonen maintained his hot streak with an assist on Linus Omark’s overtime winner at Atlant. The Finnish forward teed up his teammate’s decisive one-timer and made it 12 games in a row where he was among the points.

Jokerit might have secured victory even sooner after out-shooting its opponent 30-21 in regulation, but needed an equaliser from Steve Moses to tie it at 3-3 with 10 minutes left.

Moses, another prolific scorer for the Finns this season, also got an assist on Tommi Huhtala’s first period leveller, helping to wipe out Igor Levitsky’s early opener. Huhtala also tucked away a penalty shot, but Yaroslav Dyblenko and Sergei Shmelyov put Atlant back in front. 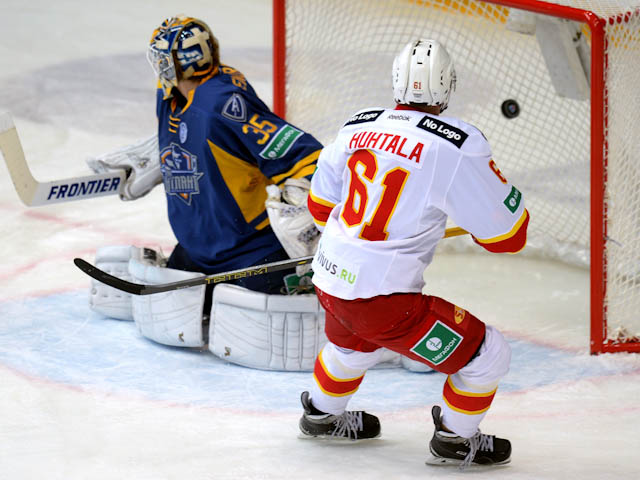 Nine-second blast sets up Slovan
A powerful first period display set Slovan on the way to a 5-1 win at home to Dinamo Riga.

Two goals in nine seconds saw Ziga Jeglic and Michal Vondrka put the Slovaks in command inside four minutes, and Vondrka soon added his second of the night. Matt Murley assisted both of those before finding the net himself to make it 4-0 before the first intermission.

Dinamo improved after the break, outshooting Slovan 18-5, but Linus Videll was the only player who hit the target as the Latvians were left with a big deficit to recover in the final session.

In the end, though, it was Slovan’s Libor Hudacek who completed the scoring