Defending champion Metallurg Magnitogorsk picked up another win to stay out in front in the Eastern Conference – but the return of Sergei Mozyakin after injury was even greater cause for celebration.

Mozyakin, the KHL’s all-time record scorer, had been absent since he picked up an injury at Dynamo Moscow on September 17, but it didn’t take him long to get back to business in a 4-1 win at Avtomobilist.

The forward claimed an assist on Danis Zaripov’s opener in the fifth minute before scoring off his colleague’s pass in the 16th.

Mozyakin had a further assist as Vladislav Kamenev made it 4-0 in the second, serving notice to defenses that he is well and truly back in the game. 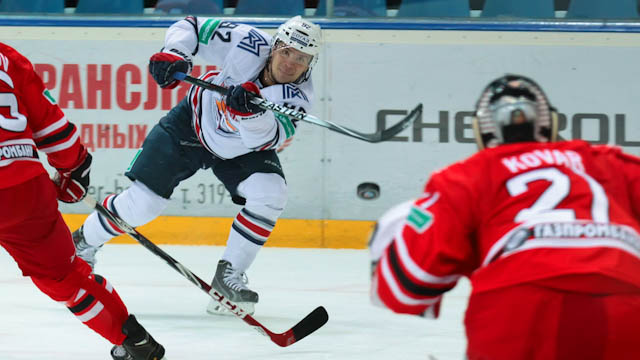 Kvartalnov celebrates milestone in Novosibirsk
CSKA’s Dmitry Kvartalnov recorded the 150th victory of his coaching career to complete a happy return to his former club, Sibir.

Once again Alexander Radulov was the key figure, posting 1+1 in his team’s 3-2 victory as CSKA was made to work hard for its 10th win in 11 games this season.

Radulov got the game-winner in the 58th minute, deflecting home a pass from Nikita Zaitsev, another former Sibir man to sneak a narrow verdict.

After a scoreless opening session Sibir took the lead through Patrik Hersley after the break. That advantage didn’t last long though as Radulov picked out the unmarked Stephane da Costa for the equalizer.

CSKA got its nose in front early in the third through Nikolai Prokhorkin, but Sibir’s Oleg Gubin tied it up.

Shirokov keeps scoring
Sergei Shirokov added two more to his goal tally for the season, moving to 14 in 11 games and helping Avangard to a 4-2 win at Traktor that keeps the Omsk team in second place in the East.

Shirokov struck twice in short order at the start of the second period, opening up a 2-0 lead and steering the game firmly in his team’s favor.

Erik Gustafsson got the game-winner, emerging from the sin bin to complete a swift counter attack and make it 3-0.

Deron Quint and Konstantin Panov clawed it back to 2-3, but Denis Parshin quickly extended Avangard’s lead with Shirokov getting an assist.

Scoring at the double
Maxim Pestushko and Denis Mosalyov both scored twice as Dynamo Moscow subdued Vityaz to win 6-4 at Luzhniki.

The damage was done in the first 12 minutes as Dynamo chased starting goalie Harri Sarteri and opened up a 4-1 lead.

When Yury Babenko made it 5-1 early in the second it seemed that Vityaz might be on the wrong end of a defeat as heavy as the 7-1 loss it suffered at SKA on Saturday, but two former Dynamo players helped make the scoreline more respectable. Dmitry Shitikov got a double of his own and Maxim Afinogenov added another. 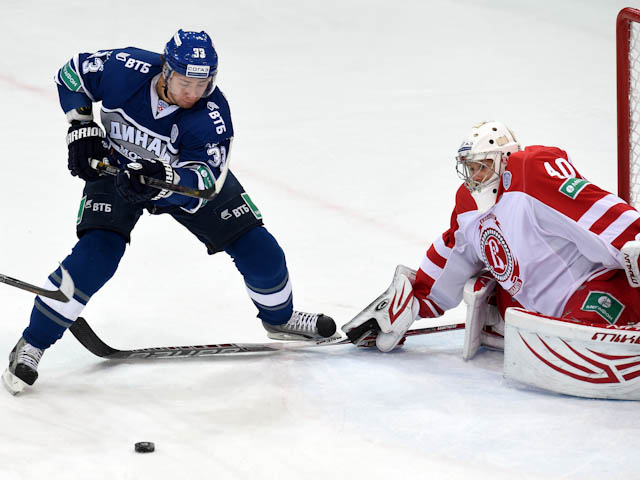 Ak Bars came from 0-2 down to win 3-2 at Neftekhimik in the Tatarstan derby. Janne Pesonen got the game winner early in the third after Yaroslav Alshevsky and Dan Sexton had given the host the early initiative. Fyodor Malykhin and Ilya Nikulin hauled the Kazan team level in the second.

Two goals in 90 seconds midway through the third period set Barys on the way to a 2-1 win at Ugra. Dustin Boyd and Oskars Bartulis did the damage for the Kazakh team.

Niclas Bergfors scored twice to lead Admiral to a comeback win at home to Torpedo. Wojtek Wolski gave the visitor a first-period advantage, but Admiral recovered to win it 4-1.

A pair of goals for Anatoly Nikontsev led Severstal to a 5-4 verdict at Amur. The Steelmen were 5-1 ahead early in the third but faced an anxious finish after Dmitry Lugin scored two to close the gap. 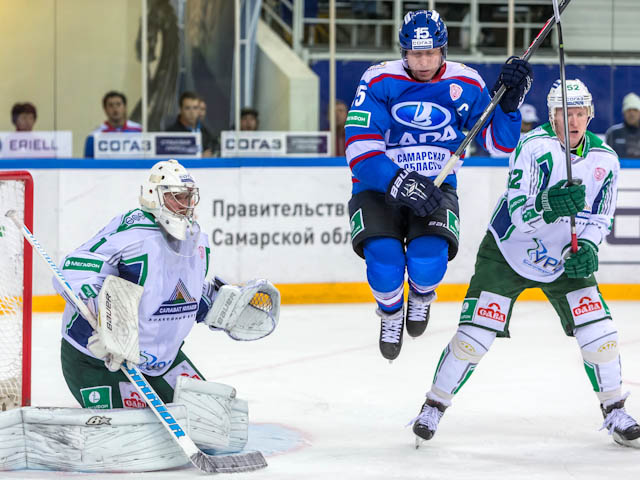