Alexander Radulov was the architect of CSKA’s latest victory, with five assists in a 6-3 home win over Neftekhimik.

In the end, though, it was all about Radulov. Whenever he got the puck he sowed panic in the heart of the Neftekhimik defense, and getting the disc back off him was a task that typically required the close attention of at least two men.

Only CSKA’s sixth of the night, a wicked one timer from Evgeny Artyukhin, had nothing to do with Radulov’s masterclass. 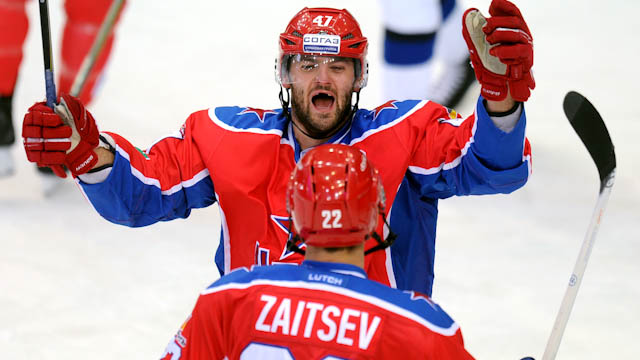 Jokerit on song
Jokerit served up a third-period blitz to sink Admiral 7-3 after the visitors gave them a scare early on.

Four unanswered goals in the final session, include a beautiful solo effort from Steve Moses and an 11th goal of the season for the prolific Niklas Hagman, gave Erkki Westerlund’s men a comfortable margin of victory.

But up until the 40-minute mark the game was too close to call. Admiral opened the scoring in the eighth minute through Andrei Sigaryov, and even though Juhamatti Aaltonen quickly tied it up the Finns couldn’t get away from their opponent. Even after Jere Karalahti and Moses made it 3-1, two quick goals at the end of the middle session saw Admiral go into the second intermission all square.

However Moses got his second of the game two minutes after the restart, collecting the puck in his own zone and charging down the ice before winning a close-up duel with Ari Ahonen to make it 4-3. Hagman’s goal was sandwiched between power play efforts from Tommi Huhtala and Linus Omark, the latter wrapping up the scoring by finishing another neat passing move around Ahonen’s net.

Still no stopping SKA
SKA stretched its perfect start to nine games after edging Atlant by the odd goal in nine. Young Artemy Panarin led the way, scoring twice including the decider, while Tony Martensson and Roman Cervenka both had 1+1.

Ilya Kovalchuk had two assists to remain on top of the scoring charts; he’s now tied with Danis Zaripov on 17 points.

But Atlant belied its position near the foot of the Western Conference and played a full part in the game. Andreas Engqvist and Sergei Shmelyov both contributed two points to a losing cause here. 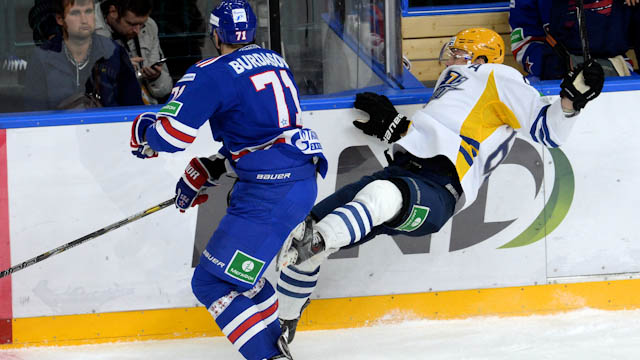 The early exchanges were all about Evgeny Orlov, who scored two first-period goals to put the Khabarovsk team ahead.

But Orlov’s wings were clipped as Magnitka took complete control after that, blasting five goals in 10 minutes in the second period.

Danis Zaripov got two of them, starting the recovery in the 27th minute and getting the go-ahead goal just 41 seconds after Oskar Osala tied it up just after the midpoint.

Once in front Magnitka powered on to record a convincing victory. Francis Pare scored two, Denis Platonov got one and Zaripov completed his hat-trick with the seventh. 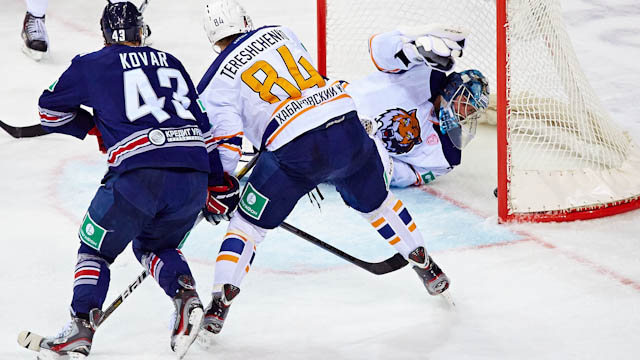 Dynamo Moscow’s Alexander Yeryomenko shut the door on HC Sochi to earn his team a hard-fought 1-0 win by the Black Sea. Dynamo began the game under pressure, outshot 10-4 in the first period, but Yury Babenko’s marker in the 15th minute separated the sides. Yeryomenko finished with 29 saves.

Ilya Sorokin boosted his burgeoning reputation with another fine display in goal for Metallurg Novokuznetsk. He made 32 saves to hold Ak Bars to a 1-1 tie in regulation and followed it up with two more stops in the shoot-out. Alexander Komartisty claimed the winner for a Siberian team no longer content to be a push-over.

Patrick Hersley’s overtime goal snapped a 2-2 tie to give Sibir victory at Avtomobilist. Chances were at a premium throughout, and Hersley scored in the 63rd minute with the first shot on target of the added time.

The decisive action came in the second period as Dinamo Minsk rallied to win 3-1 at Severstal. Jonathan Cheechoo and Charles Linglet turned the game around after Sergei Monakhov gave the hosts the lead. Matt Ellison found the empty net to finish it off.

Vityaz goalie Harri Sateri produced 33 saves in a 0-0 tie at Dinamo Riga then stopped three penalty shots to give his team the win. Mario Kempe scored the decisive penalty.