The Finn, who previously coached Avangard, was appointed in place of Rostislav Cada yesterday and saw his new charges put on a dominant display early on. Slovan outshot Medvescak 16-3 in the first period and took the lead early in the second through Ladislav Nagy.

But then it all began to go wrong as Medvescak stepped up the pace. Pascal Pelletier tied it up before Segal struck either side of the second intermission. Patrick Bjorkstrand wrapped up a 4-1 win with a short-handed goal in the 56th minute. 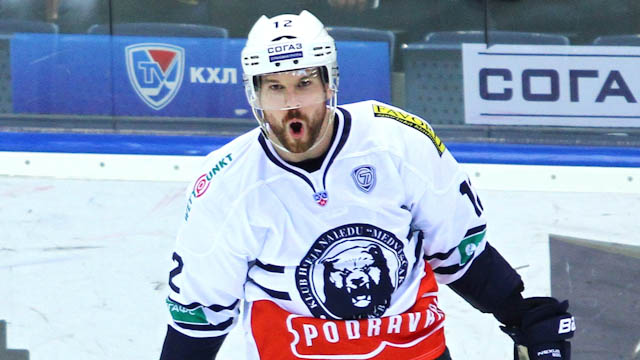 Loko shows character in Astana
Lokomotiv Yaroslavl overcame adversity to claim a shoot-out win after a 3-3 tie at Barys.

The first period went badly for the visitors, conceding an early goal and then losing starting goalie Curtis Sanford after he was hit hard by Konstantin Rudenko. Rudenko was also removed from the game after the 18th-minute incident.

Despite their troubles Loko got back into the game in the second period, taking the lead thanks to Yegor Averin and Jiri Novotny only for Nigel Dawes to tie it up in the last minute. The pattern repeated in the third as Brandon Bochenski scored with just 43 seconds left to cancel out Sergei Konkov’s goal.

But stand-in goaltender Vitaly Kolesnik proved a more than able substitute. He made three saves in the shoot-out and Novotny’s successful effort proved decisive.