Russia’s sledge hockey youngsters on their way to the USA 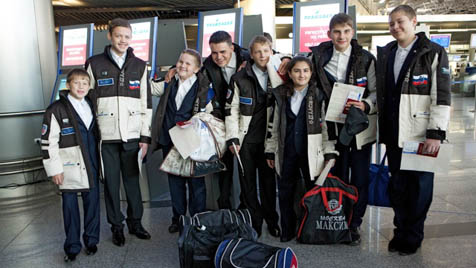 On Monday, September 22, seven young boys and one young girl embarked on a historic journey from Russia to the United States. The children are known collectively as Ladoga, a Russian children’s and juniors’ sledge hockey team, and they are setting out on their first international tour. Waiting for them across the Atlantic are the South Jersey Wings of Steel, an American team eager to test their skills against the Russians in a friendly game - Ladoga’s first encounter on foreign soil.

Ladoga is the only children’s and juniors’ team in Europe that plays sledge hockey, the Paralympic version of ice hockey. The team was formed in 2013 at the Oka Paralympic training camp in Aleksin, Tula Oblast, and is supported by two charities: the Helena and Gennady Timchenko Charitable Fund and the Ural Foundation.

The seven boys and one girl who make up the Ladoga roster for the friendlies in the United States are all between 12 and 15 years of age. After landing in New York, they will play a total of three games, which, of course, can only have a positive effect on the development of the sport and the treatment and rehabilitation of people with disabilities in Russia. The youngsters will also get the opportunity to meet some players from the NHL.

"We are aiming to raise the popularity of sledge hockey in our country, to ensure that information about the sport becomes more accessible, and to promote improvements in attitudes towards people with disabilities. These tournaments not only help to promote sledge hockey as a Paralympic sport, but also help children who have opted for ice sports to believe in themselves and feel that they are valuable members of society," said Igor Baradachev, Deputy Director General of the Helena and Gennady Timchenko Charitable Fund.

"These games in the USA will be the first international meetings between children’s sledge hockey teams, as Ladoga is the first team of its kind in all Europe and Russia. The Moscow Sledge Hockey Federation would like to thanks its partners for arranging these friendlies. There is no doubt the tour will start a new trend in the development of Russian sports and of social adaptation by physical training and sport for people with disabilities,” added Anatoly Yegorov, President of the Moscow Sledge Hockey Federation.
#sledge