Dynamo hits back to down Salavat. September 23 round-up

Alexei Tereshchenko knew all about the importance of beating Salavat Yulaev during his long career at Ak Bars, and those old habits came back to him in the colors of Dynamo Moscow.

The forward, who arrived in Moscow over the summer, scored twice in the second period to wipe out the home team’s 2-0 lead and set Dynamo on the way to a 4-2 win.

Salavat’s distress was not helped by the fact that Tereshchenko’s equalizer came when his team was short-handed – the second game running the Blue-and-Whites have scored at a numerical disadvantage.

Konstantin Gorovikov claimed the game-winner on 38 minutes and Konstantin Volkov’s empty-netter wrapped it up. 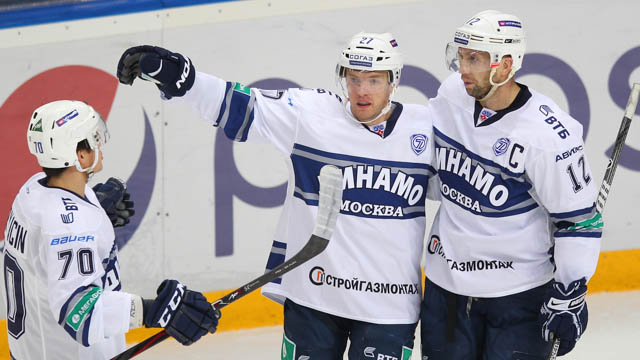 The visitors opened up a 3-0 lead with Richard Gynge and Niclas Bergfors both posting 1+1 as the home crowd was stunned in the first half of the game.

But after Bergfors got Admiral’s third in the 35th minute, the hosts finally got into the game. Artemy Panarin pulled one back just 60 seconds later, and it took a further 90 seconds for Viktor Tikhonov to drag it back to a one-goal game.

Two more quick goals early in the third completed the recovery. Patrick Thoresen levelled it up in the 45th minute and within a minute Yury Alexandrov put SKA in front for the first time.

The Army Men now have eight wins in a row which is a KHL record for the start of the season.

Vityaz shocks Jokerit
Jokerit went down to a surprise 4-3 defeat in an entertaining game in Helsinki.

Anton Korolyov sounded an early warning when he put the visitors ahead in the 12th minute but Niklas Hagman tied it up inside 24 seconds and Juhamatti Aaltonen made it 2-1 before the first intermission.

The second stanza turned that upside down, though, as Mario Kempe and Roman Horak both got power play goals to put Vityaz back on top.

Linus Omark had a third-period effort ruled out before Hagman’s second of the night tied it up once more on 50 minutes, but parity didn’t last long: Maxim Mamin got the game winner on 51:17 while Vityaz goalie Harri Sateri picked up the plaudits for an impressive 30-save performance.

Jan’s got it Kovar-ed
Metallurg Magnitogorsk forward Jan Kovar got both goals in his team’s 2-1 win over Sibir. The center, robbed of his usual partner Sergei Mozyakin, got his first on the power play off a pass from Chris Lee.

Vladimir Butuzov tied it up in the second but Kovar won it with a goal that relied on the newly-introduced hybrid icing rule. Evgeny Biryukov launched the puck up the ice from inside his own zone and after goalie Mikko Koskinen allowed the puck to bounce back off the boards Kovar reacted first to tuck it into the net.

CSKA limited Lada to just nine shots on goal and eased to a 3-0 victory. It took the Army Men a little time to make the breakthrough, but Ivan Telegin got the opener on the power play midway through the second period to reward relentless home pressure. Nikolai Prokhorkin and Alexander Radulov completed the scoring. 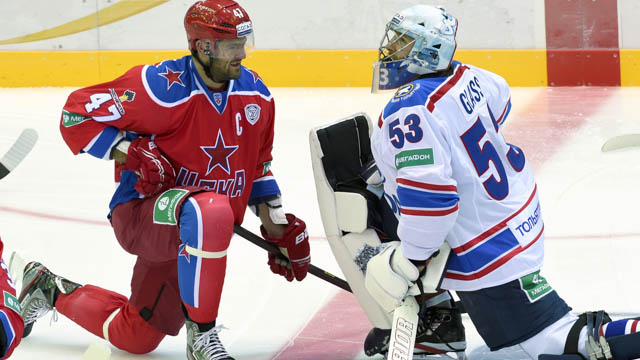 Ak Bars scored twice in three minutes midway through the second period to take a 3-1 verdict at home to Amur. Justin Azevedo and Mikhail Varnakov did the damage for Zinetula Bilyaletdinov’s team.

Igor Radulov’s evening started well as he gave Atlant the lead at Dinamo Riga after 79 seconds, but it ended badly with the player expelled from the game for a hit to the head early in the third. By that time Dinamo was already 3-1 up, and went on to win it 4-2.

Metallurg Novokuznetsk held on for a 3-2 win at Avtomobilist after racing into a 3-0 lead. The visitor took complete control of the first period, but in the end Dmitry Maltsev was credited with the game-winner as the home team came back in the final session.

Maxim Trunyov gave Neftekhimik a shoot-out win at Severstal. His team had earlier led twice, but tied 2-2 in regulation.

Traktor also won on the road in a shoot-out with Andrei Kostitsyn snapping a 3-3 tie at Ugra. The home team led 3-1, but third period goals from Danil Gubarev and Martin Ruzicka tied it up.

Dmitry Meleshko got both goals for Dinamo Minsk as the Belarusians won 2-1 at Torpedo in overtime. Petteri Nokelainen found the net for the hosts. 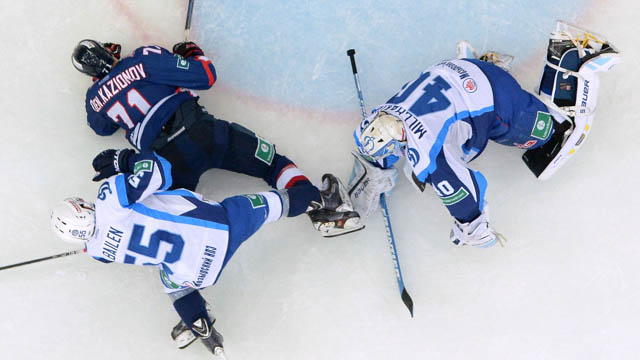