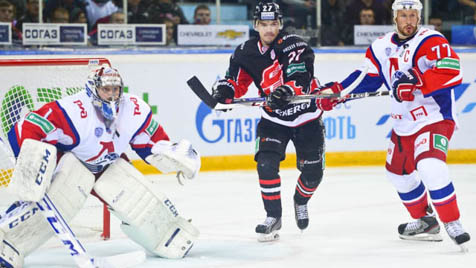 Avangard’s prolific partnership of Sergei Shirokov and Denis Parshin was on song once again to lead the team to a 4-2 victory over Lokomotiv in Omsk.

The duo grew up together at CSKA but their paths diverged a few years ago. Shirokov headed to the NHL, while Parshin remained in Russia and saw his form hit something of a plateau. But this season they’ve been reunited by Raimo Summanen at Avangard and quickly rekindled the old magic.

Against Loko they shared five points – 2+1 for Parshin, 1+1 for Shirokov – taking their season’s tally to 25. Add in the contribution of line-mate Vladimir Sobotka, whose two assists today lifted him to 2+7 from the first eight games of this season, and you’ve got a potent line.

How Lokomotiv must wish for something similar. So far none of Sean Simpson’s players has managed a point a game, with Jiri Novotny topping the charts on 1+5 from seven games. There were some bright spots to be taken from the 4-2 defeat on Monday – Sergei Konkov scored his first goal of the campaign, and the team showed some character to come back from 0-2 behind. But with just two wins so far a season which began with so much hope in Yaroslavl is currently failing to deliver on its promise.