Two weeks after Dynamo Moscow suffered a heavy Opening Cup defeat to Metallurg Magnitogorsk the teams met again – but in Moscow it was a slightly different story.

This time it was goalless after 65 minutes of action before Metallurg took the verdict thanks to shoot-out goals from Danis Zaripov and Chris Lee.

Dynamo, lifted by its 3-2 win over Ak Bars last time out, produced a performance far more in keeping with what we’ve seen from the Blue-and-Whites in recent seasons, with Harijs Vitolins’ team putting the defensive blocks on Magnitka’s free-scoring forward line.

It made for a tense, technical battle on the Luzhniki ice, a game more reminiscent of a play-off decider than an early-season scrimmage, and both Alexander Lazushinand Vasily Koshechkin had to make some big saves at times.

There was controversy late on. First Dynamo’s Maxim Pestushko thought he might have won a penalty shot when he tumbled when clear on goal; the officials deemed the challenge fair. Soon afterwards Sergei Mozyakin was being helped off the ice following a heavy check from Martins Karsums. That too went unpunished, although Karsums and Sergei Tereshchenko were sent to cool their heels after a scuffle after the whistle.

Overtime saw two big saves from Lazushin to deny first Jan Kovar then Yaroslav Kosov but nothing could separate the teams. 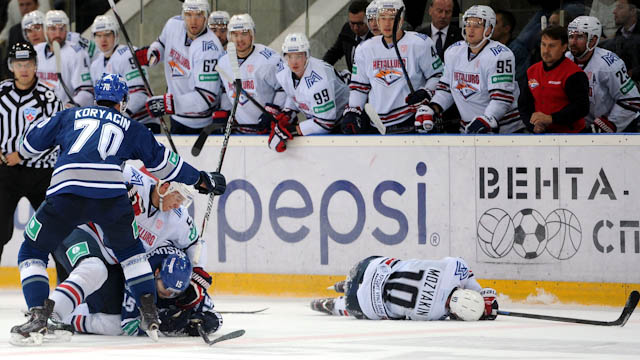 The Vladivostok team, which plays at the Fetisov Arena in the Far East region where the Hall of Famer is now a parliamentary representative, got its first win of the season.

But that was overshadowed by Nazarov’s meltdown. Disputing a too many players call against Barys, he threw a towel and a bottle onto the ice before showing several obscene gestures as he was expelled from the bench. After the game he insisted that those gestures were not directed at the fans, but at Fetisov, who he hinted had influenced the officials.

On the ice Richard Gynge was the star man with two goals and an assist on Alexander Goroshansky’s game-winner. 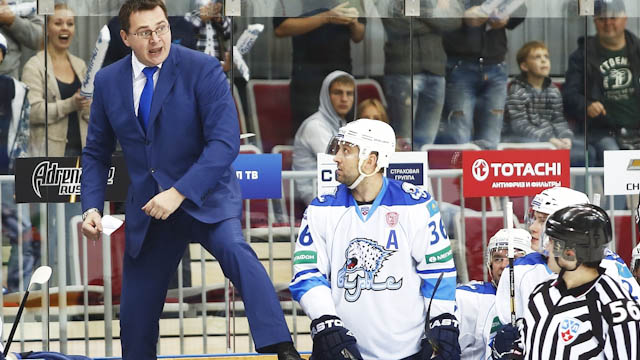 Another scalp for Kuznya
Metallurg Novokuznetsk followed up its win over Avangard by beating Salavat Yulaev 3-2.

The visitors were looking to stretch their winning streak to four games, and seemed to be on course when Antti Pihlstrom tipped home an Ivan Vishnevsky shot to convert a 5-on-3 power play.

But the home team hit back through Alexei Kosourov and two goals from Ansel Galimov made it a second memorable victory in a row for the Siberians.

Scoring race hots up
The race to be the KHL’s top scorer is already hotting up, with SKA’s Ilya Kovalchuk facing competition from Avangard’s Sergei Shirokov. Both men were in action today, and both added to their goal tally.

Shirokov was up first, and he scored twice to match Kovi’s tally of eight. Those goals helped a much-changed Avangard to a 4-0 victory at Amur, although ironically the Shirokov-Subotka-Parshin line was the only one to go unchanged as head coach Raimo Summanen reacted decisively to the defeat at Metallurg Novokuznetsk.

But Shirokov didn’t stay on top of the scoring charts for long. Kovi took just three minutes to get on the scoresheet for SKA at Ugra, and matched his rival’s double haul as the Petersburg team raced into a 4-0 first period lead.

That enabled Vyacheslav Bykov to give some game time to reserve goalie Evgeny Ivannikov. However, the experiment brought more questions than answers as Ugra battled back to make it 3-4 as SKA hung on to claim its sixth successive win.

There were contrasting fortunes for two KHL newcomers. Jokerit kept up its encouraging start with a high-scoring 7-5 win at Neftekhimik, but Sochi was handed a lesson in big league hockey by a rampant Ak Bars.

A Niklas Hagman hat-trick put Jokerit in total control early on as the Finns eased to a 4-1 lead, but Dan Sexton’s double inspired a fight-back to 4-4. Steve Moses and Juhamatti Aaltonen put Jokerit back in control and even though Igor Polygalov got it back to 5-6 there was no way back for the home team.

Zinetula Bilyaletdinov returned to Sochi for the first time since his Olympic disappointment with team Russia and his Ak Bars team wasted little time in blowing away any unhappy memories.

The visitors were 4-0 up at the first intermission, grabbing the lead on 73 seconds thanks to Fyodor Malykhin and stretching the advantage with three power play goals. It could have been even more comfortable but Mikhail Varnakov saw his penalty shot saved by Andrei Gavrilov before Shaun Heshka wrapped up the scoring in the dying moments.

In Chelyabinsk Kyle Wilson’s shoot-out winner snapped a 1-1 tie between Traktor and Dinamo Riga – but only after 20 post-game penalty shots. Earlier Dinamo had led through Martins Cipulis but Deron Quint tied it up.

Goalies were on top in Yaroslavl where Lokomotiv eventually took a 2-0 verdict over Avtomobilist. The game was scoreless until the 55th minute when Yegor Yakovlev finally broke the deadlock. Yegor Averin’s empty-netter clinched it, Curtis Sanford made 26 saves for his shut-out. 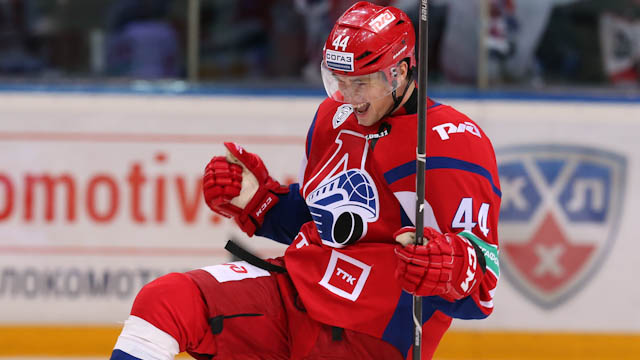