SKA’s early season form continues to send an ominous message to its rivals with Traktor the latest victim. The Petersburg team led 4-0 at the first intermission on its way to a convincing 6-2 triumph.

Once again special teams did the damage: Patrick Thoresen and Roman Cervenka opened up a 2-0 lead with power play goals and the third came on a delayed penalty as Dmitry Kalinin scored. Ilya Kovalchuk added another power play effort as the teams traded four second period goals; Cervenka finished with 1+2 in a 6-2 success. 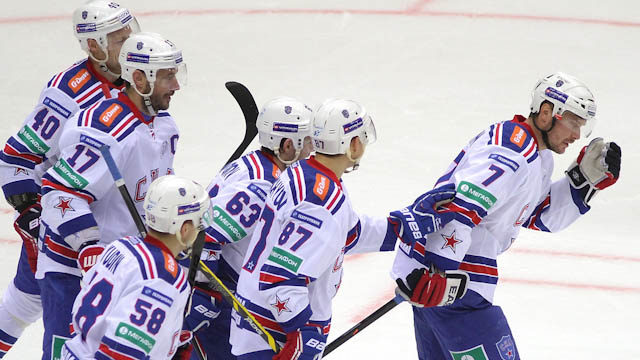 Debut delight for Sochi
HC Sochi powered to a 6-3 victory as big-time hockey returned to the Olympic city.

Ilya Krikunov was the architect of the team’s win, picking up a goal and two assists as the Leopards overcame Avtomobilist in their first home game.

The home team wasted little time in scoring its first ever KHL goal in the Bolshoy Dome, Krikunov setting up Alexei Krutov’s opener after just 19 seconds. Two minutes later Krikunov repeated the trick, claiming an assist on Pavel Koledov’s goal to the delight of the 8,100 crowd.

Avto, still licking its wounds after a 1-6 mauling at Vityaz last time out, hit back to tie it up by the first intermission but the game was settled in the second period with two power play goals

Krikunov made it 3-2 and Timofei Shishkanov stretched that advantage in the 37th minute.

Alexei Yefimov got on back for the visitors, but Sochi would not be denied and by the time Mikhail Anisin wrapped up the scoring the Black Sea party was already in full swing.

Repeat performances
Salavat Yulaev made it two wins in two days at Amur, and Metallurg Novokuznetsk repeated its opening game success over Avangard.

Just 24 hours after taking a 2-0 verdict in Khabarovsk, Salavat opened up a 2-0 lead once again thanks to Antti Pihlstrom and Ivan Vishnevsky. This time, though, the home team found the net through Jesse Niinimaki before his fellow Finn Pihlstrom made it 3-1. Amur pulled one back in the third but Sergei Peretyagin’s goal wasn’t enough to save the home team from another defeat.

In Novokuznetsk Avangard was out for revenge after its 0-1 reverse in the first game of the campaign. This time Denis Parshin found a way past Ilya Sorokin to give the Omsk team a second period lead, but Ryan Stoa levelled it with three minutes left. Stoa then had an assist on Alexei Kosourov’s overtime winner as Sorokin finished with another 39 saves against this opponent.

Jokerit maintained its bright start to life in the KHL with an overtime win at Ugra. Ville Lajunen settled it midway through the extras after Niklas Hagman cancelled out Artyom Bulyansky’s goal.

Oscar Moller’s shoot-out goal gave Ak Bars the verdict following a 2-2 tie at Lokomotiv. The Kazan team led twice in regulation thanks to Igor Mirnov and Justin Azevedo, but Geoff Platt and Vladislav Kartayev tied it up each time. 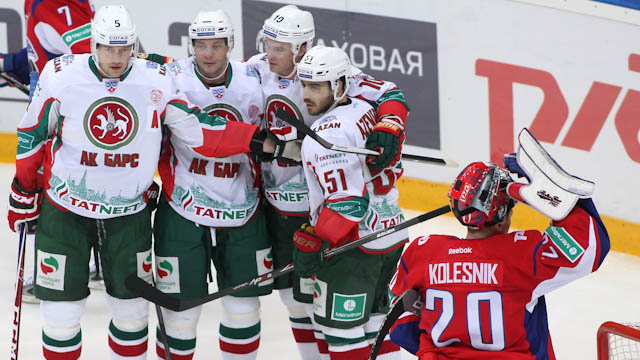 Semyon Valuisky scored twice, including the overtime winner, as Lada picked up a win over Dinamo Riga. The teams tied 2-2 in regulation with Maxim Zyuzakin getting his first senior goal for Lada.

Andreas Thuresson’s hat-trick led Sibir to a 4-1 win at home to Barys. Dustin Boyd put the visitors ahead but Thuresson got to work to turn the game around.

Former Vityaz man Evgeny Timkin had an eventful return to his former club, scoring the opening goal in Metallurg Magnitogorsk’s 4-1 win before being expelled after initiating a third-period brawl. Sergei Mozyakin got the game-winner in Magnitka’s latest success. 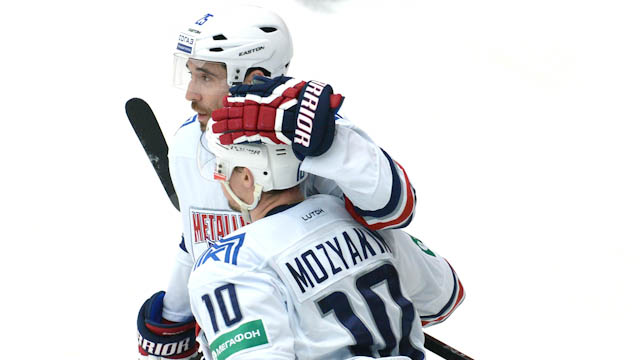